I don't care whether or not my top stock to buy in October is rising or falling right now. Seriously. And I even own shares already.

How can I not be concerned about the stock price? I'm so confident in the company's business model and future prospects that any temporary fluctuations in what other investors think about how much it's worth simply don't matter to me. That's the best way to think about investing in any stock.

The specific company (and stock) I'm referring to, though, is Alphabet (NASDAQ:GOOG) (NASDAQ:GOOGL). And a recent significant achievement by Google's parent has me more convinced than ever why it's a great stock to buy right now. 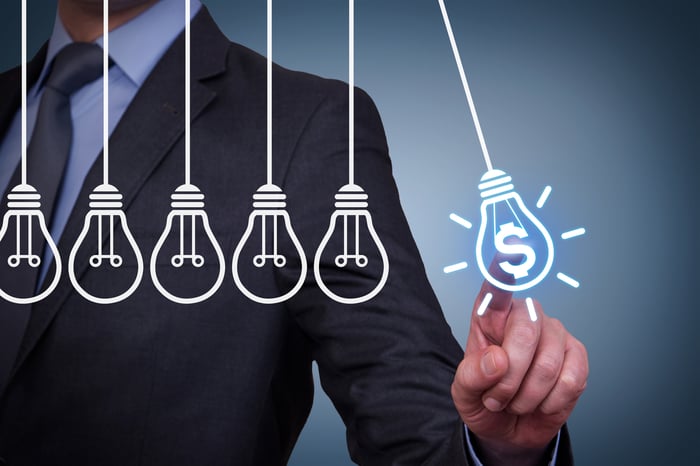 A couple of weeks ago, Alphabet subsidiary Google released a paper that said the company had achieved "quantum supremacy." This grandiose-sounding claim refers to a quantum computer's ability to perform a calculation that even the most powerful current computers can't practically achieve.

Quantum computers, by the way, use the principles of quantum physics that govern sub-atomic particles to store and process data. The details would make your head spin, but the main thing to know is that quantum computers hold the potential to crunch huge amounts of data simultaneously where current computers would have to process the data sequentially.

Specifically, Google said that its Sycamore quantum computer solved an enormously complex mathematical problem in only a few minutes. Scientists estimated that it would take 10,000 years to solve the same problem using the fastest supercomputer in the world that's currently available.

Achieving quantum supremacy is a really big deal, even though it's only an initial baby step on the path to reaching the full potential of quantum computing. That potential includes solving some extremely challenging issues such as discovering drugs to treat cancer. Quantum computers could also make possible a level of artificial intelligence (AI) that's exponentially more powerful than the AI of today.

Do I think that Alphabet is a great stock to buy in October because of its milestone step in quantum computing? No. However, this achievement underscores just how much Alphabet focuses on and invests in changing the future. And that is a reason to consider buying the stock.

Google's quantum computing breakthrough is one of several areas where Alphabet is a pioneer. It's a leader in AI. It's a leader in self-driving car technology. Alphabet even has a subsidiary Calico that's at the forefront in research to tackle aging in an effort to extend the human lifespan. If there's a technology that could be disruptive, there's a pretty good chance that Alphabet is working on it.

One of the strongest businesses on the planet

Just as important as Alphabet's potentially disruptive ventures, though, is the reason why the company can afford to invest so heavily in so many efforts: its existing businesses. I don't think it's exaggerating one bit to state that Alphabet claims one of the strongest businesses on the planet.

The company now has nine products with at least 1 billion users on a monthly basis. This huge base creates a powerful economic moat for Alphabet. It's not that the company doesn't have competitors. Microsoft, for example, is one of the world's biggest companies and battles Alphabet in several areas, notably including the search engine and operating system markets. But Alphabet more than holds its owns in virtually every market where it competes.

Thanks primarily to healthy growth in advertising on its applications, Alphabet generated more than $148 billion in revenue and more than $34.7 billion in profits over the last 12 months. The company has a cash stockpile totaling $121 billion with debt of only $14.2 billion. Few companies, if any, are in as strong of a financial position as Alphabet is to invest in new technologies that could fuel more growth in the future.

Monopoly or not, it's a winner

Some think that Alphabet has become too big and too powerful. Democratic presidential candidate Sen. Elizabeth Warren (D-Mass.) wants to break up big tech companies, including Alphabet. The company is reportedly the focus of an antitrust investigation that includes attorneys general in over 30 states. Alphabet has been hit with big penalties for antitrust violations in the European Union.

You might wonder if Alphabet is too risky with all of this antitrust fervor. I don't think so.

Alphabet really isn't a monopoly in the tradition of the big monopolies of the past that were broken up by regulators. Think about the old AT&T and Standard Oil, for example. As mentioned earlier, unlike these former monopolies, Alphabet has competition. It's just that consumers are choosing Alphabet instead of its competitors.

My view is that it's unlikely that Alphabet will be forced to split into multiple companies. Even if it does, though, I agree with Needham analyst Laura Martin that the value of the parts of Alphabet would be worth more combined than the company is worth today. Investors like pure-play stocks and tend to drive up their valuations.

Regardless of what happens on the antitrust front, I'm confident that Alphabet will continue to be successful over the long run. That's not to say that the company will score in every new arena in which it's investing. But if you're looking to buy the stock of a company that has a top-notch business model with the potential to create huge new markets that don't even exist today, I can't think of a better choice than Alphabet. Monopoly or not, this stock is a winner.