While iRobot's upcoming Terra release is exciting, it's actually the Roomba that is more important for investors to focus on.

It seems we are living in the days of the servant robot -- both at home and in the workplace. And riding the smart home trend is iRobot (IRBT -0.02%), maker of the autonomous vacuum Roomba. While the Roomba remains popular among consumers, the company has missed revenue expectations for two straight quarters, and management trimmed earning projections, causing the stock price to plummet by over 50%.

Now many investors are pinning hopes on a product called Terra -- a "robot" lawnmower due out later this year. But can a new gadget save the company from decline? 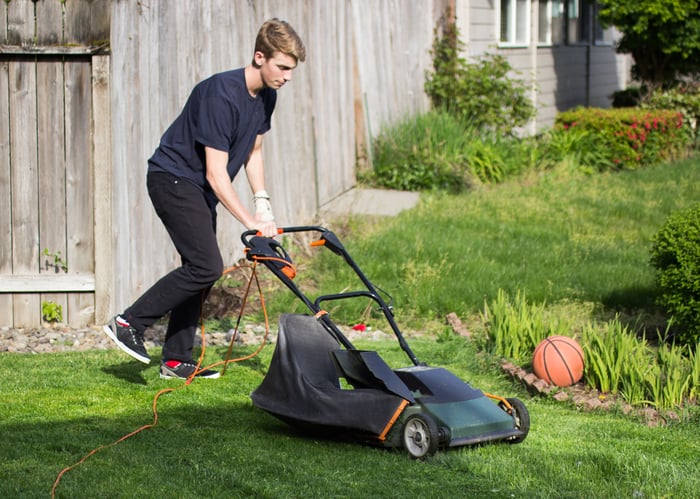 iRobot launched its first Roomba vacuum in 2002. More recently, the company added new products like the Braava mop and Mirra pool cleaner to its product lineup. In 17 short years, these consumer robots catapulted this company from a start-up to a major brand with over $1 billion in annual sales. Earnings growth has dazzled as well. iRobot hauled in $1.77 in earnings per share in 2017 before banking $3.07 in earnings per share last year -- a 73% increase year over year.

But then the trade war with China started. iRobot primarily manufactures in China, and import tariffs (currently at 25%) have negatively affected earnings. Despite projecting 10% to 14% growth in revenue for this year, the company is only projecting earnings per share of $2.40 to $3.15. At best this would represent a measly 2.5% earnings growth. At worst it's a sharp 22% drop. This forecast not only demonstrates that tariffs are negatively affecting earnings, this wide range also reflects just how much uncertainty there is about the impact of earnings in the short term.

However, the Chinese import tariffs negatively affected business in another unexpected way. CEO Colin Angle recently said on an earnings call that the company is "navigating the US market segment that is growing more slowly than we had originally anticipated, driven by the direct and indirect impacts of the ongoing US/China trade war and related tariffs." To start the year, iRobot projected full year revenue growth of 17% to 20%. This slower US market growth caused the company in the second quarter to revise growth down to 10% to 14%.

So what's the solution for slipping revenue growth and slumping earnings? Many believe a new product in a new product category will turn iRobot's fortunes around. To that end the company announced it's releasing its first robot lawnmower. Expected to hit shelves in 2019, consumers can likely expect an announcement any day now.

Yet iRobot is late to the autonomous lawnmower party. There are already many options out there, including well-known brands, like Husqvarna's (OTC: HUSQF) Automower and Honda's Miimo. While widespread robot lawnmower adoption is still a ways off, iRobot needs to play some catch-up.

That said, iRobot's Terra does have an attractive selling point. Most autonomous lawnmowers, like the aforementioned Automower and Miimo, require a boundary wire. This wire must be installed to keep the lawnmower mowing your lawn, and not the neighbor's flower bed. By contrast, Terra will leverage the company's mapping technology already in use in its Roombas and Braavas. Basically, you just "tell" Terra where to mow -- no clunky boundary wire installation required. This simpler installation could boost Terra's adoption.

But is Terra the answer to all iRobot's woes? I don't think so. Research by Reportbuyer estimates the entire global autonomous lawnmower market will only be around $3 billion by 2023. By contrast, research by Market Study Report suggests the robotic vacuum market will reach about $8 billion by 2024. (For perspective, the overall robotic vacuum market is at about $3 billion presently.)

So while a new product is great for iRobot, investors need to temper expectations against the reality that lawnmowers aren't going to be as big as vacuums for the foreseeable future. And iRobot already faces established competitors in the lawnmower space -- whereas it enjoys relative market dominance in the autonomous vacuum department.

Rather than ask if a single product will turn iRobot's results around, investors should ask more big picture questions. First, are autonomous vacuum cleaners becoming more or less pervasive? Research suggests that the overall market will more than double over the next few years, but likely at a slower pace because of the (temporary) trade war. But will iRobot's Roomba command a meaningful share of the autonomous vacuum market moving forward? The Roomba is already the top dog in the space and management stated recently that, despite having raised prices to offset tariffs, it hasn't lost any market share to underpriced competitors.

iRobot's cake has been and will keep on being the Roomba. The Terra won't take the cake, but it could be the icing.