Please ensure Javascript is enabled for purposes of website accessibility
Log In Help Join The Motley Fool
Free Article Join Over 1 Million Premium Members And Get More In-Depth Stock Guidance and Research
By Daniel B. Kline - Oct 7, 2019 at 9:15AM

The coffee company has a lot of upside and few major risks to its solid, sustained financial performance.

Starbucks (SBUX -1.03%) elevated coffee drinking in the United States. It took espresso-based beverages and made them common, rather than something you mostly experienced in Italian restaurants or local coffee shops. The chain certainly did not invent the drink, but it made a version of a European-style coffee house a near-ubiquitous thing in its home market and is beginning to do so internationally.

More importantly for investors, the chain made it normal to charge $4 or more (sometimes a lot more) for a cup of coffee. The company took a popular product, got people to want to pay more for it, and built a sort of ritual around it.

That's a strong model for sustained success, and it's part of why Starbucks makes an excellent pick for your retirement portfolio. 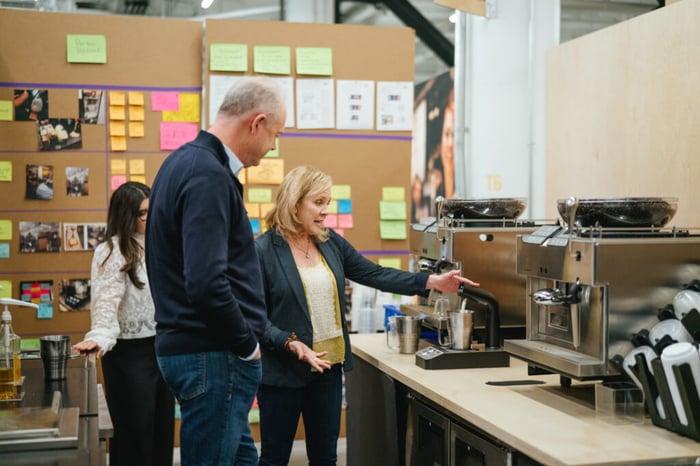 It's a formula that works

Visiting a Starbucks, whether for a quick morning stop, a later-day visit, or multiple visits in one day, has become part of a routine for tens of millions of people around the world. That's because the chain offers an affordable indulgence. You may not be able to buy the car you want, wear the jewelry you would like to, or go out for a fancy dinner, but you can afford a latte, cappuccino, or anything else on the Starbucks menu.

Starbucks has a product line that's both diverse and unlikely to fall out of favor, and it also has operational edges. CEO Kevin Johnson has a technology background, and he has pushed the company to constantly refine its app. That has included being a leader in mobile ordering and payment.

In recent quarters Johnson has also focused efforts on improving store efficiency. Some of that has involved using technology to take work -- like tallying inventory -- out of the hands of in-store employees. That allows them to spend more time making drinks or helping customers.

The chain has also invested heavily in the store experience, working on ways to get people their food and drinks as fast as possible. Those efforts have included launching a testing lab, the Tryer Center, and staffing it partly with people who also work in its stores.

Starbucks is a long-term, slow-growth play

The coffee chain has an expanding global presence, including thousands of stores in China. Its fast-growth days may be behind it in the U.S., but it has opportunities to grow sales in mature markets by adding premium products.

This stock makes sense for your retirement portfolio because it has a strong upside and limited risk. It's unlikely a major U.S. competitor will disrupt the brand since so many have tried and failed. There may be bumps in the road in China, but the company has established that its model works there, and in dozens of other countries around the world.

This isn't a sexy play, but it's a solid piece of your retirement portfolio that should rise over time while paying you a dividend -- $0.36 per share currently. That's a number the company can easily cover (it earned $1.12 per share in its most recent quarter) while still investing heavily in keeping its technical and operational advantages.