Please ensure Javascript is enabled for purposes of website accessibility
Log In Help Join The Motley Fool
Free Article Join Over 1 Million Premium Members And Get More In-Depth Stock Guidance and Research
By Beth McKenna - Oct 7, 2019 at 11:14AM

Stitch Fix (SFIX 6.78%) released fourth-quarter and full-year results for its fiscal year 2019 on Tuesday, Oct. 1, after the market closed. On the positive side, the online personal styling service's quarterly earnings beat Wall Street's estimates and its revenue was essentially in line with expectations. However, its first-quarter top-line guidance came in significantly lighter than analysts had been projecting.

Stitch Fix's Q4 revenue soared 36% year over year -- or 26% adjusted for the quarter's extra week relative to the year-ago period -- to $432.1 million, on target with the $432.3 million consensus estimate. Growth was driven by an 18% jump in active clients and a 9% increase in average net revenue per client. Adjusted earnings per share (EPS) fell 59% to $0.07, driven by the company's May launch in the U.K., its first international market. Nonetheless, this result easily surpassed the $0.04 the Street had been expecting. 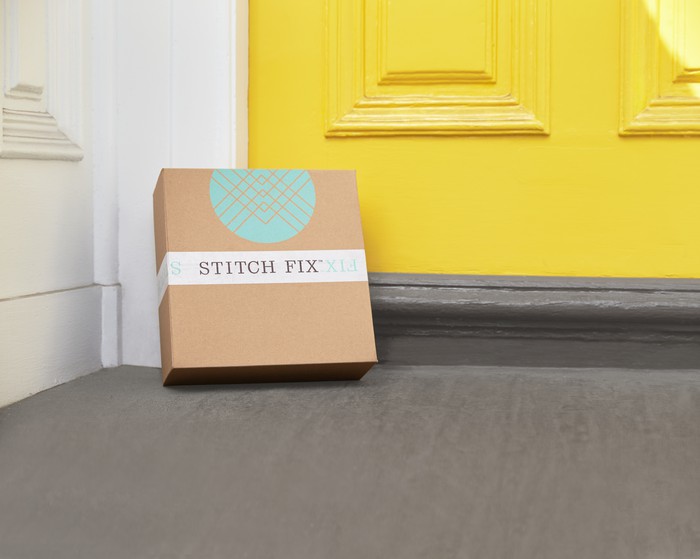 1. Why Q1 revenue outlook is light relative to the full-year outlook

We plan Q1 softer than our full-year growth for two reasons. First, we've had greater success this year with summer products like T-shirts and sleeveless tops. While these items carry a lower average unit [retail value], we're happy to see this seasonal product successful deep into the summer season [meaning into fiscal Q1]. Second ... we spent less on marketing in late Q4, which meant we had fewer clients to contribute to revenue at the start of Q1.

Stifel analyst Scott Devitt nicely clarified Yee's statement: "I think what you're saying is that you're comping lower-price summer products relative to fall sales last year because the weather was warmer [than usual] in the first two months of the [fiscal first] quarter."

For Q1, management said it expects revenue between $438 million to $442 million, or growth of 20% to 21% year over year. This is considerably lower than the $451 million Wall Street was expecting. Moreover, it's also lighter than the company's growth projection for the full fiscal year of 23% to 25% year over year, adjusted for the extra week in fiscal 2019 relative to fiscal 2020. Full-year revenue guidance of $1.90 billion to $1.93 billion is in line with the $1.91 billion analyst consensus estimate.

2. The company plans to extend its platform in fiscal 2020

Recently, we began testing an offering called Shop Your Looks. This offering is part of our new direct-buy functionality, which enables clients to choose and purchase items outside of a fix directly from our website. However, unlike most e-commerce offerings, which choose to show every available product to every visitor, what's unique about Shop Your Looks is that it's hyper-curated and personalized to every client.

Lake expounded on the "hyper-curated and personalized" comment by saying that Shop Your Looks shows a customer an average of just 30 to 40 items at one time. In other words, the company is using its personalization capabilities in a new way here.

This feature is about eight weeks into beta testing, which is limited to 20% of its women clients. Early results have been encouraging, Lake noted.

3. What the CEO had to say when asked about competition from Amazon

An analyst asked: "Amazon recently rolled out a personal shopper product for [Prime] Wardrobe. So any initial thoughts on that? Or are you seeing any impact ... from that offering?"

On the competition [front] -- [let's] step back ... we have $400 billion of market opportunity here and 80% of that market opportunity is still in stores [20% is online]. And so I would say that our... [challenge] is... migrating those dollars online. ... [W]e're not necessarily looking at a look-alike model of who the competitive set is. ... [W]e see our differentiation as being really strong in that, one, ... personalization is entirely what we're focused on.

[E]ven in Shop Your Looks, which we talked about, which has more of a direct-buying component, ... we are doing almost the opposite of showing you everything. We are taking tens of thousands of things and actually only showing you at any given time 30 or 40 shoppable items. And so it's a very counter approach to what a lot of other e-commerce [companies do].

Many folks -- myself included -- are never going to sign on to Stitch Fix's core offering, which is having a bunch of items -- a "fix" -- sent to us that we didn't specifically order and that have to be returned within a few days if we don't want to keep them. Now, I might give Shop Your Looks a spin -- and that's why I think this offering has a lot of potential. It can reach consumers who have no interest in the company's core product -- and that's a sizable group, in my opinion.

That said, one can bet that Amazon.com (AMZN 2.57%) will soon be offering a feature very similar to Shop Your Looks. While I agree with Lake's comment that this feature is "a very counter approach to what a lot of other e-commerce [companies do], it's not a big leap from what Amazon already does. Amazon already offers algorithmically generated personalized recommendations based upon the mountains of data it collects.

If I were a Stitch Fix investor, I'd be enthused about the company's plans to launch Shop Your Looks. I'd also be monitoring Stitch Fix's revenue growth and other key metrics for signs that Amazon's new Prime Wardrobe personalization offering could be negatively affecting Stitch Fix's growth trajectory.