Please ensure Javascript is enabled for purposes of website accessibility
Log In Help Join The Motley Fool
Free Article Join Over 1 Million Premium Members And Get More In-Depth Stock Guidance and Research
By John Rosevear - Oct 7, 2019 at 10:41AM

Slumping auto sales added to the pressures on the struggling company.

TrueCar's stock fell about 14.1% in September, according to data provided by S&P Global Market Intelligence. TrueCar's shares were clobbered in August after the company reported earnings that missed expectations and cut its guidance for the full year. TrueCar's earnings fell short after a key automaker partner cut spending on incentives, a bearish sign for the company.

Concerns about that earnings miss probably contributed to the continued sell-off of TrueCar's stock in September. But investors' worries extended beyond TrueCar, especially after a mid-September report revealed that auto sales in Europe had declined. Shares of TrueCar and several other fairly new companies seeking to disrupt the traditional car-shopping process, including Carvana, CarGurus, and Cars.com, came under pressure in the second half of the month. 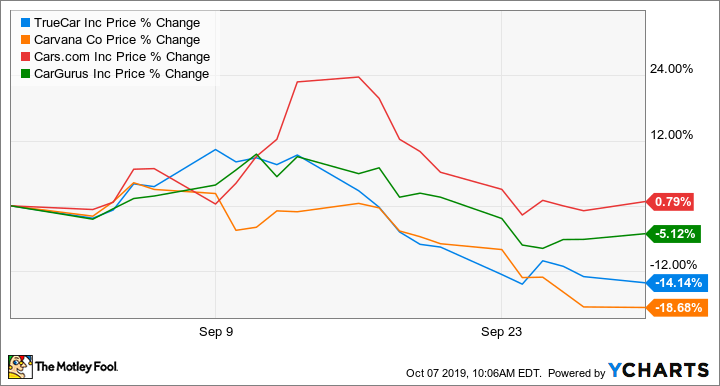 With TrueCar now guiding to year-over-year declines in revenue and earnings for 2019, interim CEO Mike Darrow has his work cut out for him. Not only does the company need to find a way to reassure investors that it has growth (and profits) in its future, it may also need to convince them that it can survive a cyclical downturn -- and soon.