Investors are wondering whether to welcome or fear Qiagen’s recent announcement about its CEO’s departure, slowing sales, and business restructuring.

Qiagen NV (QGEN 0.62%), a European biotech stock that develops and markets molecular diagnostics to test DNA, RNA, and proteins, issued three separate press releases on Monday, Oct. 7. First, the company announced a new collaboration with Illumina (ILMN 0.48%) to develop and market tests for clinical applications. Second, Qiagen announced that the upcoming third quarter earnings will be below the company's prior guidance due to slower than expected revenue growth in China. Then, the company said it would discontinue one of its product lines. Lastly, it announced its CEO is stepping down. In the wake of all these events, its stock dropped 20% with investors questioning the company's prospects going forward.

Quiagen's tools help physicians to understand their patients' conditions, researchers to elucidate new mechanisms for therapeutic intervention, and criminal investigators to uncover forensic clues. The company sells 500 products to more than 500,000 customers globally. Originally based in Germany, Quiagen is now headquartered in The Netherlands, In 1996, it became the first German company to complete an initial public offering on the Nasdaq. 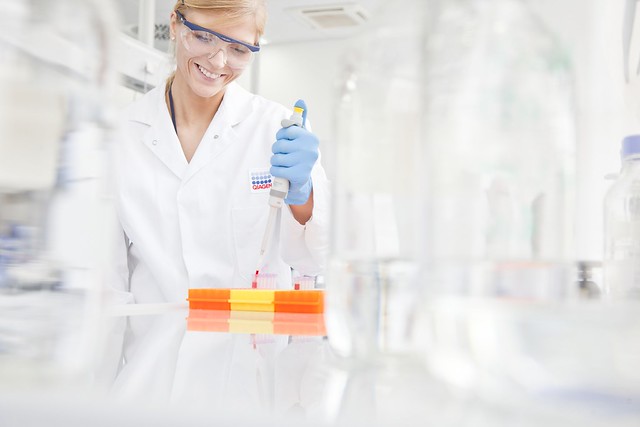 Qiagen announced 3% revenue growth for the third quarter compared to the company's prior guidance of 4% to 5%. The company blamed a slowdown in China for the decrease, citing 6% revenue growth excluding China. Back in July, Qiagen announced it was restructuring its Chinese joint venture due to slower than expected uptake for in vitro diagnostics in China. Qiagen stated that adjusted EPS for the third quarter will now be approximately $0.35 to $0.36. In the second quarter, the company generated $77.4 million in net income on sales of $381.6 million. The Oct. 7 press release was a preliminary earnings announcement without additional figures. Investors will learn more on Oct. 30 when it announces results from the third quarter and first nine months.

The longtime CEO is stepping down

Management transitions create uncertainty loathed by investors. What makes this event particularly difficult to digest is that CEO Peer M. Schatz is stepping down "to pursue new opportunities" after 27 years at Qiagen. In an orderly change of a key executive, the replacement is named and is ready to take the reins. Instead, Thierry Bernard, Qiagen's senior vice president and head of molecular diagnostics will take over as interim CEO alongside existing Chief Financial Officer Roland Sackers. The Supervisory Board will only now begin to look for a suitable replacement. This shows that the Board and CEO were not in sync on this development, creating yet another reason for investors to be nervous.

Discontinuation of its next-generation sequencing machines

Qiagen's GeneReader for next-generation sequencing (NGS) has reached the end of its line. Investors should not fret as these instruments only made up about 12% of total revenues. These machines analyze millions of fragments of DNA to rapidly uncover valuable biological information about the samples tested. The company will continue to make consumable products to run on any sequencing platform. Those consumables make up close to 90% of current revenues. Qiagen will incur a pre-tax non-cash restructuring charge of $195 million to $200 million related to the NGS GeneReader discontinuation.

Qiagen and Illumina announced on Monday that they struck a deal for a 15-year collaboration to extend NGS-based in vitro diagnostic kits and companion diagnostics for clinical applications. These tests provide doctors with precise molecular information which, in turn, helps fine-tune treatment decisions for their patients. Both companies will develop and commercialize kits to be used with Illumina's MiSeq Dx and the NextSeq 550Dx platforms which are currently available worldwide. No financial terms were included in the joint press release.

Qiagen's stock plummeted 20% today on more than fourteen times the usual trading volume. J.P. Morgan (JPM 1.73%) analyst Tycho Peterson downgraded Qiagen to underweight from neutral and reduced the price target to $25 from $38. Meanwhile, William Quirk at Piper Jaffray (PIPR 1.80%) was not quite as glum, reiterating his neutral rating and lowering his price target from $36 to $31 per share.

Organic growth has been called into question, and the restructuring will take some time to play out. Perhaps the new CEO will become more acquisitive or hang out the "For Sale" sign. Uncertainty in the near and medium terms raises the caution flag. However, for buy-and-hold investors, this may be an opportune time to acquire shares should Qiagen successfully reinvent itself for the future.