Please ensure Javascript is enabled for purposes of website accessibility
Log In Help Join The Motley Fool
Free Article Join Over 1 Million Premium Members And Get More In-Depth Stock Guidance and Research
By Lee Samaha - Oct 9, 2019 at 7:50AM

Previewing the upcoming report of the one the highest quality industrial stocks.

Honeywell (HON 1.19%) investors find themselves in an unusual position going into its third-quarter earnings. The company has been raising full-year sales and earnings guidance through 2019, and has arguably been doing it conservatively, but it still faces some near-term headwinds. Let's look at what to expect from the earnings report and why it matters to so many other industrial companies.

Whether its Honeywell, or its peers General Electric (GE 1.30%) and United Technologies (RTX 2.00%), the theme of 2019 has been consistent: Aerospace remains the strongest industry performer. In particular, the commercial aerospace aftermarket has been extremely strong and has generally surpassed expectations. For example, United Technologies raised its estimate for Collins Aerospace full-year aftermarket organic sales growth to high single digits, from low to mid single digits, on its second-quarter earnings call. 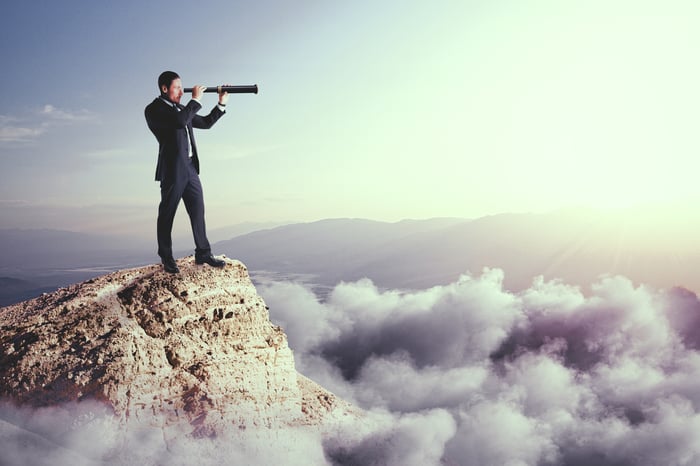 Meanwhile, the chart below shows just how strong Honeywell's and GE's aftermarket sales have been in 2019. It's not entirely clear how much of this is down to the Boeing 737 MAX going out of service -- meaning older aircraft are being flown to fill the gap -- and how much is sustainable growth. No matter the reason, the commercial aerospace aftermarket has been very strong in 2019. But how long can it continue? 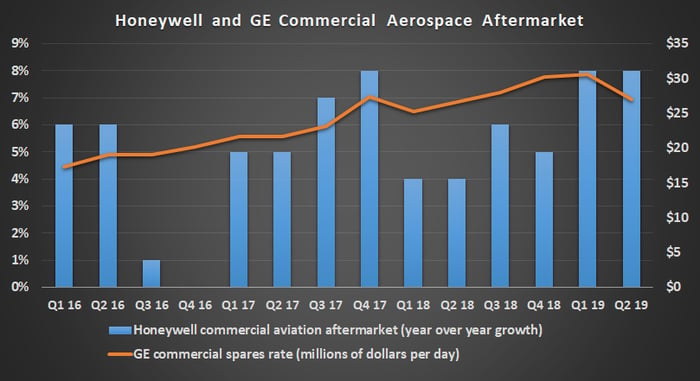 What will Honeywell report?

Frankly, it's hard to anticipate because, on the one hand, the commercial aftermarket has been very strong in 2019. On the other hand, the International Air Transport Association (IATA) has argued that the global purchasing managers' index (PMI) "has historically been a useful leading indicator" for passenger traffic (and therefore aftermarket demand) and there's no doubt PMI and other business survey data have been weaker in recent months.

As you can see below, it has clearly weakened in the last few months, and the IATA described the start of the peak season in July as being soft. As anyone who invests in airline stocks knows, the industry tends to be cyclical. 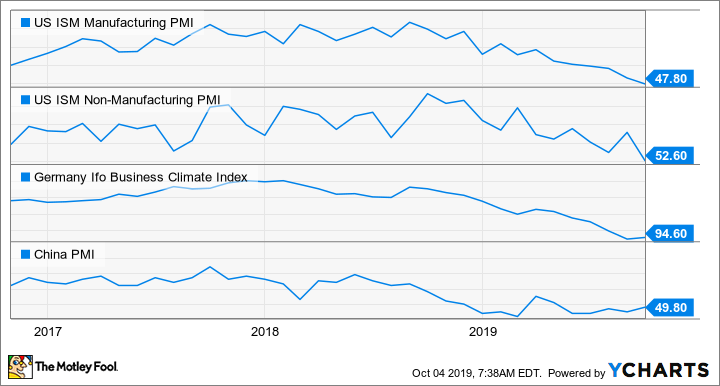 Honeywell's guidance for organic sales growth in the third quarter is a conservative-looking 2% to 4%, and there's a reason. As CEO Darius Adamczyk has previously outlined, 60% of Honeywell's revenue comes from short-cycle businesses. These businesses give a shorter time between initial contact and sales and are therefore more susceptible to an unexpected slowdown in the economy. To help readers understand which areas could impact Honeywell, here's a table of the company's major end-market exposure in each segment. The ones in boldface tend to be short-cycle businesses (the definition is not exact as the process solutions end market also has significant short-cycle businesses).

We've already discussed the commercial aerospace aftermarket, and the short-cycle-heavy safety and productivity solutions (SPS) has already reported weakness in 2019 -- organic sales in the SPS segment declined 4% in the second quarter, and don't be surprised if the company reports another weak quarter.

In addition, investors should look out for what Honeywell says about the building technologies segment because the first two quarters' organic sales growth (9% and 5% respectively) might not be as easy to sustain in the near future.

For reference, Honeywell competes directly with Zebra Technologies in productivity products and with Emerson Electric in process automation, and investors in those companies should follow the report closely.

Honeywell's purchase of material handling company Intelligrated in 2016 made it a leading player in the fast-growing world of warehouse automation -- an interesting way to play the theme of investing in robotics stocks, and a market driven by the need to service e-commerce growth.

Indeed, Honeywell Intelligrated "has been growing by strong double digits, like think well north of 20% on average for the last several quarters," Adamczyk said on the second-quarter earnings call. But there were some delays on large orders in the second quarter, with Adamczyk arguing that: "some of the orders that we expected in Q2 got pushed out a little bit. They're still out there, we expect to book them in Q3, Q4."

It will be interesting to see what Honeywell Intelligrated reports for the third quarter and what Adamczyk expects for the fourth quarter. Any sign of weakness won't read across well to companies like Zebra Technologies.

Honeywell tends to be one of the higher-quality industrial names, and management's guidance tends to be conservative. So if Honeywell gives disappointing earnings, then industrial investors have reason for concern.

On a more positive note, a moderation in growth is not the same as a recession, and a mere maintenance of full-year guidance -- albeit with some weakness in a few short-cycle businesses -- will probably be taken as a net positive in the current investing environment.