Amazon (NASDAQ:AMZN) bought Twitch.tv for $970 million about five years ago. And while the e-commerce titan's investments in video content and distribution have gained a lot of attention from investors, Twitch remains a bit under the radar.

But the ad-supported live-streaming platform could prove an extremely valuable asset as Amazon ramps up its digital video advertising business. While it's still considerably smaller than Alphabet's (NASDAQ:GOOG) (NASDAQ:GOOGL) YouTube by just about any measure, it's growing quickly. And considering the relative size of Amazon's advertising segment (outside of sponsored listings on its marketplace), Twitch could be as instrumental to its business as YouTube is to Google. 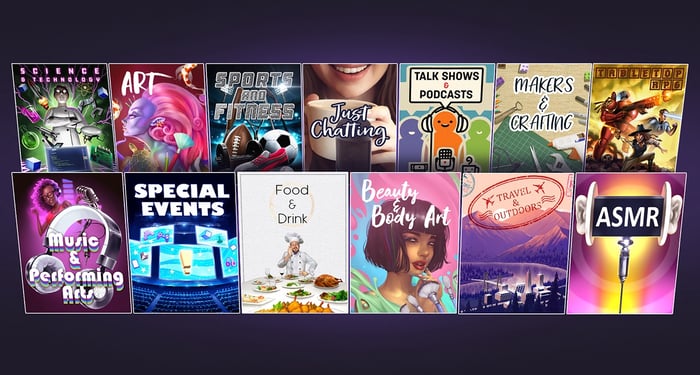 Some of the categories of content you can now find on Twitch. Image source: Twitch.tv.

Amazon has seen Twitch's audience continue to grow quickly over the last few years. It has over 15 million daily active viewers. Those viewers streamed over 2.5 billion hours last quarter, according to StreamLabs. Total hours streamed per quarter have climbed 28% since the start of last year.

Those numbers are minuscule compared to YouTube, which counts over 2 billion users. The company previously said its users stream an average of one hour per day on mobile alone.

But Amazon and Twitch have been able to make the most of its audience. It reportedly garnered $500 million in gross advertising revenue in 2017, and it had an internal goal of doubling that number in 2018. By comparison, YouTube generated an estimated $15 billion last year for the technology company, although that estimate seems conservative.

One reason Twitch may be punching above its weight compared to YouTube is it offers advertisers a familiar ad format: 30-second commercials. Unlike YouTube, there's no option to skip those ads, they're embedded in live streams from broadcasters. It's an ad format that complements Amazon's growing inventory of video ad space on its Fire TV platform. As such, Amazon can streamline its ad sales team to improve the overall profitability of its advertising business.

Not just for gaming anymore

Twitch originated as a gaming-focused streaming service, but it's expanding to more general content. Some of that expansion is being pushed by Amazon. Twitch users can stream Amazon's simulcast of Thursday Night Football, and some Twitch streamers have already started offering their own commentary for fans.

But more and more big-name media outlets are streaming professional content on Twitch in a similar fashion to how media companies have adopted YouTube. Companies including Sky News, The Washington Post, Buzzfeed, and Cheddar have all started streaming content on Twitch. They cite advantages including reaching an audience not found on their traditional outlets and the interactivity of the platform. The strong monetization Amazon is capable of producing for streamers may also be a contributing factor.

There are a couple advantages of attracting more professionally produced content. First, it improves the value of advertisements on the platform. Marketers like to place their ads alongside higher-quality content. It also reduces brand-safety risk, something YouTube has come under fire for in the past. Second, more varied content expands Twitch's appeal beyond gamers.

Amazon is one of the few companies with the ability to produce better ad targeting and measurement than Google. It has an unparalleled trove of shopper data that expands beyond its online marketplace, as it's integrated Prime with Whole Foods. On the flip side, it has the ability to attribute ad impressions to sales on its marketplace, giving marketers a tight feedback loop to tell if their ads and targeting are working.

As Amazon expands its video ad inventory on Twitch, it'll be able to leverage its unique assets to build better targeting and measurement tools for its advertisers. Ultimately, that should translate into higher average ad prices and greater ad revenue per user. Combined with growing engagement from both publishers and viewers, Twitch has the potential to be a massive source of revenue for Amazon's ad business -- on par with the importance of YouTube to Google's business.