Give Domino's (NYSE:DPZ) management plaudits for situational awareness. In its Oct. 8 fiscal third-quarter 2019 earnings release, the company shortened its three-to-five-year outlook (which it traditionally addresses each quarter and updates periodically) and, in doing so, reduced various key expected growth rates for the more immediate two-to-three-year period.

The tweaked figures aren't the result of a lack of execution; rather they're an acknowledgment of the rise of delivery services. As I discussed in July, delivery platforms have enabled nontraditional competitors like fast-food restaurants to challenge Domino's for delivery mind share and market share. In the company's earnings conference call, CEO Richard Allison pointed to this upheaval in the competitive landscape as a primary reason Domino's has moved to the shorter two-to-three-year outlook:

We believe that the evolving market conditions and the resulting uncertainty have reduced the relevance of a three-to-five-year outlook. And in our view, the market is more dynamic now than it has ever been. The reality is that we don't have visibility into exactly how long some of these new entrants into the quick service delivery segment are going to benefit from the financial support of aggregators, who are seeking to buy market share.

These players are currently pricing below the cost to serve, offering free delivery or other deep discounts that are currently enabled by investor subsidies. So when we take all that into consideration, we no longer believe that a long-term outlook with a three-to-five-year time horizon is that instructive to our investors.

Reading between the lines, Domino's accepts that its competition on the delivery side of its business has extended past traditional pizza peers to really any quick-service restaurant that uses a third-party aggregator (i.e., services like Grubhub, DoorDash, and Uber Technology's Uber Eats). Allison points out that these services are subsidized, meaning they're backed by private investors, like DoorDash, or public investors via recent initial public offerings, as in the case of Grubhub and Uber Eats.

In the race to capture market share, these services are using investors' dollars to incentivize restaurant chains to join their platforms, while also offering discounts to potential customers -- thus subsidizing both parties in a delivery transaction. 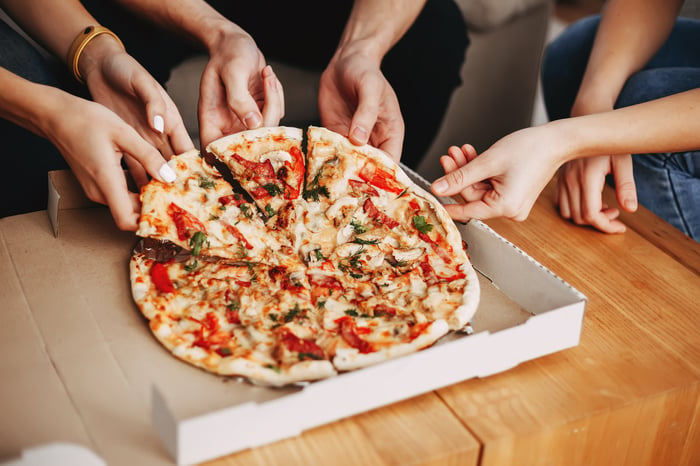 How drastic were the outlook revisions? Domino's changed its global retail sales growth target, from 8% to 12% over the three-to-five-year period to 7% to 10% over the new two-to-three-year period. U.S. same-store sales growth is now pegged at 2% to 5% annually, against 3% to 6% over the longer time horizon. International same-store sales growth is anticipated to hit 1% to 4%, versus 3% to 6% in the earlier iteration. The company hasn't changed its global net store growth target, and aims for 6% to 8% expansion in Domino's store base each year.

Management shared the thought process behind each of the annual growth rate revisions. On international comparable sales, Allison observed that the international segment has trailed its long-term growth target for four consecutive quarters, so the revised outlook is perhaps more realistic.

As for the all-important U.S. same-store sales growth metric, Allison stated that the more modest outlook reflects two primary factors. First, Domino's expects a continuation of the onslaught from rivals who (with help from aggregators) "are pricing delivery below the cost to serve."

Second, management anticipates pressure on comparable sales as the company doubles down on its fortressing strategy. This initiative calls for a dense build-out of stores in close proximity to each other in order to maximize both carryout and delivery potential. The downside of attempting to build a fortress of market share is the inevitable cannibalization of existing stores as new locations are introduced, thus reducing comparable same-store sales growth.

Domino's management team believes that despite the ramped-up pressure from quick-service restaurants and competing pizza chains, the organization should proceed vigorously with its fortressing build-out. The reasoning is that at some point aggregators will run short of ready money and reduce subsidies for both restaurants and customers on their platforms. Once the dust settles and delivery competition eases, Domino's will remain with a greater store density to better serve its loyal cadre of customers -- at least in theory.

To this I'll add the obvious. If the rise of delivery platforms is putting a lid on the ability of individual stores to appreciably increase sales, then building more stores is the only meaningful route to improving revenue -- for both Domino's and its franchisee groups -- despite risks of cannibalization and oversaturation.

Domino's run as a growth stock may be stalled for now -- shares are flat year to date. But at least executives are approaching the intermediate term with a clear-eyed analysis of the company's current situation -- a laudable first step in regrouping and mapping out future strategy.