Third-party logistics (3PL) provider J.B. Hunt Transport Services (NASDAQ:JBHT) plans to release its fiscal third-quarter 2019 scorecard after the markets wrap for trading on Oct. 15. It's been quite a volatile year for shares of the transportation organization, although they've managed to gain 15% from Jan. 1 to date.

Last quarter, management expressed confidence in the annual bid season, in which shippers issue requests for proposals and also renew existing contracts with preferred 3PL providers. Bid season is a chance for logistics organizations to adjust pricing to absorb costs increases and/or add profit margin to individual contractual relationships. Management noted in July that its pricing adjustments in intermodal and trucking assets would probably end in a net positive position. At that time, the pricing advance appeared to be settling in the low single digits -- an acceptable rate bump.

Observers should be aware that much of the company's contracted services contain built-in, indexed rate increases, so the potential for surprises is low. Nonetheless, retail shareholders and institutional investors alike will await management's qualitative notes on bid season during the company's post-earnings conference call, to gauge the impact of renewals on revenue in the coming fiscal year.

Accounting for roughly half of company revenue in any given quarter, J.B. Hunt's intermodal business constitutes its largest operating segment. In its last reporting period, Hunt's intermodal revenue declined by 1% to $1.15 billion against the prior-year quarter, while volumes declined by 8%. In recent quarters, 3PL providers' intermodal business has been crimped by lane closures, as large rail operators seek to winnow out underperforming intermodal routes. J.B. Hunt has exposure to this "lane rationalization" exercise, as well as ongoing exposure to a moderating U.S. economy, which has compressed domestic intermodal volumes in the first two quarters of the year.

Investors will key in on volume on Tuesday to get a sense that demand trends have stabilized and perhaps improved marginally. An improvement in the year-over-year volume decrease (i.e., a better result than the 8% dip revealed last quarter) should have a beneficial impact on stock price -- all other factors being equal. 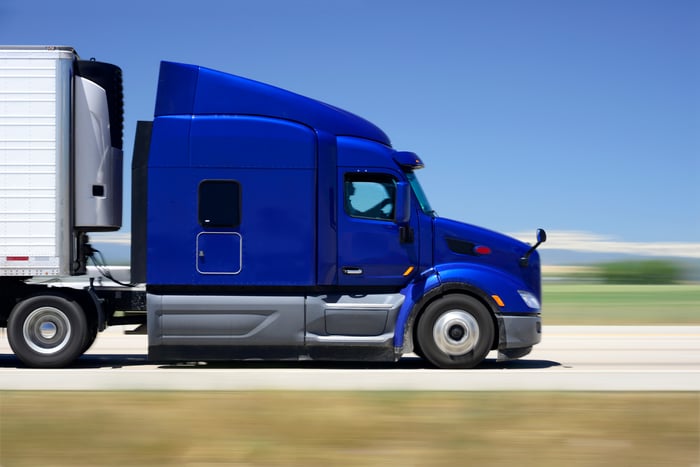 J.B. Hunt's second largest segment, dedicated contract services, or DCS, focuses on providing supply chain solutions under long-term contracts that typically last from three to 10 years. As of late, this segment has picked up quite a bit of steam. DCS revenue jumped 28% year over year last quarter, to $680 million.

This performance followed a 22% top-line increase in the first quarter. Revenue improvement in both quarters was propelled by additions to company-owned trucks during the last year: DCS's owned-truck fleet total jumped by 21% at the end of the second quarter versus the end of Q2 2018, to 10,311 trucks.

Lastly, shareholders should be aware that DCS's final-mile services business acquired home delivery specialist Cory 1st Choice Home Delivery in February. The transaction added $49 million to DCS revenue last quarter, out of a total segment revenue advance of roughly $150 million. Expect a growing fleet, rising productivity, and revenue from the Cory acquisition to lead to another quarter of double-digit revenue growth in DCS when Hunt releases results on Tuesday afternoon.