The company's big rigs are hauling in profits, though lack of truckers casts a shadow on its potential gains.

Living up to the upbeat catchphrase to "keep on trucking," J.B. Hunt Transport Services (JBHT 0.27%) saw its stock value jump following a positive third quarter (Q3) report on Oct. 15. The trucking company's revenue and earnings both stepped on the gas as its revenue per load grew during the 2021 shipping and transport squeeze. While its share price is up 16% for the month as of late October, and more than 43% for the year, there are still a few warning notes for investors amid a generally bright and bullish picture.

J.B. Hunt didn't just deliver millions of loads of products across the country during Q3 -- it also had a significant performance upside over 2020. Its revenue of $3.14 billion shot up 27% year over year, while at the bottom line, earnings per share (EPS) soared 59.3% from $1.18 to $1.88. Operating income surged 52% year over year, though it would have been higher absent increased third-party rates and higher wage expenditure on drivers because of the current trucker shortage, discussed more below. 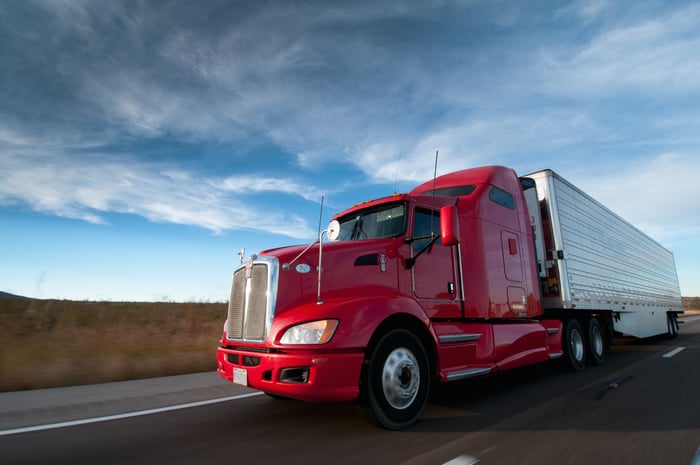 The company has also put some of its cash to use in continuing its share repurchase program, spending approximately $50 million to buy back 286,000 shares. While this is a fairly small amount relative to the 105 million shares outstanding, it still helps to improve shareholder value. The company ended the quarter with $529.6 million in cash and cash equivalents, up from its $313.3 million in cash at the year's start.

2. Details of its success show it's tapping into high transport demand

Supply chain issues, cargo backup, and high delivery demand from increased e-commerce are all conspiring to make demand for transport services strong, but unpredictably variable. Nevertheless, despite the uncertainty and increased costs, J.B. Hunt seems to be making bank, especially for its "truckload" segment. In this business segment, operating income exploded 397% year over year. Operating income rose a solid 52% in its biggest segment, "intermodal," which involves a combination of trucking (operated by J.B. Hunt) and railway transport (operated by J.B. Hunt's rail company partners) to move loads.

The higher prices it can charge in a market favorable to transport providers are reflected in its increased revenue per load. Revenue per load rose 24% for intermodal loads, and 65% for truckload cargoes. The company is also operating more tractors and more trailers than it was during Q3 2020, amplifying the benefits of higher revenue per load. CEO John Roberts, speaking during the Q3 earnings conference call, asserted that J.B. Hunt's "supply chain focused service is well-positioned and healthy for the long-term needs of our customers," with the company planning to expand its fleet to meet ongoing demand.

3. The prospect isn't all sunshine

While J.B. Hunt has plenty of positives adding to its current momentum, it and other transportation companies face a growing driver shortage, caused by multiple factors. Lack of qualified truckers was already noted during pre-pandemic 2019, anecdotally resulting from poor treatment by companies or wages failing to keep pace with cost of living increases. Frequent news stories during the past few years describing the imminent switch to mostly or fully automated trucking may also have discouraged people from opting for a trucking career.

California governor Gavin Newsom's 2019 law against use of independent contractors, AB5, makes it much more difficult for owner-operators to operate in the Golden State. This might be worsening the bottleneck at California's crucial ports of entry, where 13 loads of Chinese and other imported goods currently await each truck available to move them, according to CBS News. Finally, some truckers in certain industries are quitting or being laid off because of the Biden administration's sweeping vaccine mandates.

J.B. Hunt notes that its volumes declined 6% overall for Q3, with transcontinental volume down 9% and regional short-haul volumes less affected. CFO John Kuhlow mentioned "mixed results from some segments that are the result of cost pressures from labor issues," with the shortage cutting into operating income, during the Q3 earnings call.

What does the future hold for J.B. Hunt?

While the trucker shortage is keeping it from realizing its full potential among transportation stocks at a time when transport is in intense demand, J.B. Hunt appears to be maintaining bullish strategic momentum overall. The shortage, or economic disruptions caused by inflation, could hamstring it further at some point, but for now, investors can probably be confident in the company's ongoing growth. At least one good sign is the sequential improvement in volumes during Q3, with overall volumes down 7% in July but only 5% by September.

The positives appear to outweigh the negatives for J.B. Hunt, making it a potentially good stock for investment right now -- though with an eye on the driver situation and its possible disruptions.