Since 2011, Boeing (NYSE:BA) and Airbus (OTC:EADSY) have both reported consistently strong order activity, as the global airline industry has grown rapidly. However, order activity has slowed dramatically for both of the aerospace giants this year. In the first half of 2019, Airbus booked just 88 net firm orders. Meanwhile, the 737 MAX safety crisis hobbled Boeing, which reported negative 119 net firm orders (i.e., more cancellations than new orders) for the first half of the year.

This order slowdown continued in Q3. Both aircraft manufacturers reported more orders than cancellations for the quarter, but Airbus' year-to-date order total barely grew, while Boeing is still languishing in negative territory for the year.

Another lost quarter for Boeing

Boeing started the third quarter in decent fashion, logging orders for 31 wide-body jets in July. A firm deal for 20 787 Dreamliners from Korean Air accounted for the majority of Boeing's orders in the month.

Unfortunately, Boeing didn't make much progress in August and September. The company wasn't able to submit its final software fixes for the 737 MAX last month, as it had intended, making it virtually impossible to sell that key model. As a result, Boeing booked just one 737 MAX order during the third quarter, which was for a business jet version of the troubled aircraft.

Boeing did receive orders for another 30 wide-bodies in the final two months of the third quarter. That included a firm order for 15 767s that will be converted into KC-46A military tankers for the U.S. Air Force and a firm order for eight 787-10s from Air New Zealand. Unfortunately, these orders were more or less offset by the long-expected cancellation of an order for 22 787s by Aeroflot in September. 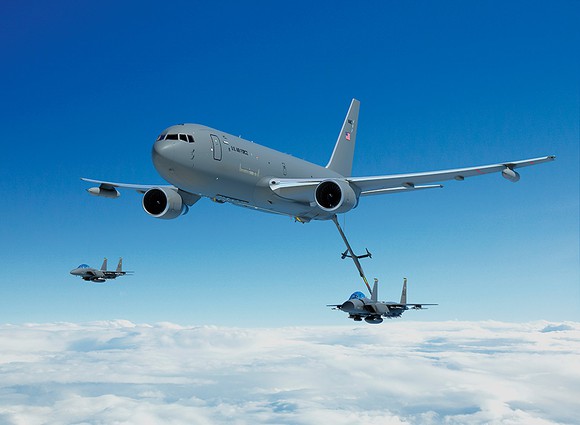 A deal for 15 KC-46A tankers was one of Boeing's biggest orders last quarter. Image source: Boeing.

When the dust settled at the end of the quarter, Boeing had booked just 35 net orders. That left its full-year net order total well below zero, at negative-84, made up of 100 net orders for widebodies -- split relatively evenly between the 767, 777, and 787 families -- and negative-184 net orders for the 737 family.

Like Boeing, Airbus started the third quarter with a solid performance in the widebody market in July, booking 28 net orders across the A330neo and A350 families. However, its net order total for July was marred by the cancellation of Republic Airways' order for 40 A220-300s (also long expected).

August was a slow month, as Airbus booked just 16 orders, all for A320neo-family jets. September was a little better. Airbus received 41 firm orders last month -- covering 14 A220s, 15 A320neo-family jets, and 12 A330neos -- offset by the cancellation of orders for nine A320neos. The highlight of the month was AirAsia X firming up an order for 12 additional A330-900neos.

Adding everything up, Airbus booked 39 net orders in the third quarter. That brought its year-to-date net order total to 127 aircraft. While that's better than Boeing, it's not an impressive figure compared with Airbus' sales performance in recent years.

As things stand, Airbus and Boeing are both on pace for miserable years in terms of order activity. However, there's still time to change that. First, the 737 MAX could potentially be approved by many global regulators for a return to service before year's end. That would make airlines more comfortable about placing new orders, which could be the spark needed to get Boeing's net order total into positive territory for the year.

Second, the Dubai Airshow will take place in November. That's often a key venue for announcing orders from Middle Eastern airlines. If nothing else, Emirates is likely to finalize the removal of 39 A380 orders from its order backlog. Back in February, Emirates committed to buy 70 smaller Airbus widebodies instead, but it's still possible that Emirates will split the replacement order between Boeing and Airbus. (Emirates also has an unfinalized commitment for 40 Boeing 787s.)

Third, December has been a huge month for aircraft orders in recent years. Most notably, Airbus brought in a stunning 776 net firm orders in December 2017. Thus, even if Airbus and Boeing enter the final month in poor position, there's still a chance that they can salvage the year with a last-minute flurry of orders.