More evidence suggests the returns program is paying off for the department store operator.

The Kohl's (KSS 1.72%) partnership with Amazon.com (AMZN 2.07%) to serve as a returns dropoff point for packages bought on the e-commerce site seems to be working as intended. Customers are coming into the store to hand over their unwanted items, and are then turning around and shopping Kohl's aisles.

We've seen evidence that this program might be successful before. Beyond Kohl's taking it from a pilot program in a handful of locations to a national rollout to all of its 1,150 stores, both geolocation foot-traffic analysis and anonymized credit card data showed a big uptick in consumers visiting Kohl's stores following implementation of the program.

Kohl's CEO Michelle Gass said in an August press release that she was certain the Amazon returns program would "incrementally contribute to our performance," and during the Consensus Great Brands Show last month, she reportedly said, "This Amazon partnership, while maybe an unexpected move, really does take advantage of the assets of the company. We gain the traffic, Amazon creates a great customer experience.” 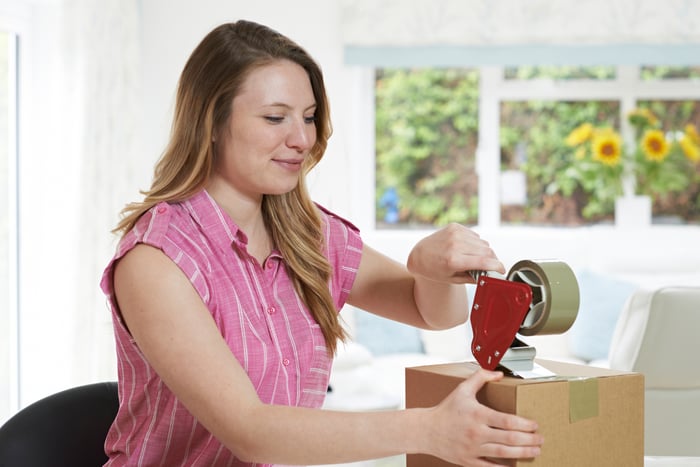 Amazon customers who return packages won't have to bother with this if they drop them off at Kohl's. Image source: Getty Images.

While it was reported that Gass told attendees of the show that 80% of the customers returning an Amazon package at a Kohl's shopped the store after dropping off the item, Kohl's reached out after publication to say it has not shared data about how many of those dropping off returns stay to shop.

While retailers across the spectrum have invested heavily in their online business, their physical stores remain the core of their operations.

"I would say that we've gone from a brick-and-mortar mind-set to omnichannel to now thinking about Kohl's as a platform," Gass reportedly said.

Other retailers probably haven't articulated it in the same way, but they're likely thinking along the same lines. The physical space is no longer a static building, but rather a kinetic waypoint in moving product between warehouse and consumer.

Walmart (WMT 1.85%) was one of the pioneers in rethinking how to use its vast footprint. Because around 95% of the U.S. population lives within a few miles or a few minutes driving distance from one of its stores, it turned them into veritable distribution centers that allowed its e-commerce operation to become hugely successful. It has become as much of a tech stock as a retailer.

Buy online, pick up in store, or BOPIS, has become an essential component of a physical retailer's online experience. It gives consumers the type of instant gratification that Amazon tries with its Prime two-day (and now one-day) shipping guarantee. For physical retailers, though, it also saves on the cost of shipping an item because it lets them offer free ship-to-store options, saving consumers money without the need for an annual membership program.

But along with the online buying experience comes the need to address returns, and here Kohl's is attempting to think outside the box through its partnership with Amazon. By making the returns process almost frictionless for the customer (Kohl's packages and ships the item at no cost to the person making the return), it reduces (or eliminates altogether) one of the pain points customers have when making a purchase.

Amazon also benefits as its customer's experience is vastly improved, which is why it is partnering with a number of retailers for package pickup and returns. It needs to make it super easy for its customers to complete the sale.

That's also why it is quite risky that Kohl's undertook the program in the first place. Making it barely an inconvenience for your customers to shop your competition's site only ensures over the long run that they buy there and not in your stores. And that calls into question just how much benefit Kohl's is receiving.

We don't know how many people might be dropping off a return and staying to shop. The number is likely not very meaningful as sales last quarter fell 3.1% on a 2.9% drop in comps, though same-store sales that had been negative during the first half of the quarter turned positive in the last six weeks, coinciding with taking the returns program national.

At the very least, it appears the partnership is not just a one-way street -- Kohl's is gaining something valuable in return, regardless of the actual numbers. And if it can turn that into a meaningful sales number, then the program will be a much better bet than many gave it credit for.

Editor's note: This article has been updated as Kohl's reached out to say that (1) it had not released details on the number of people returning items that stay to shop and (2) Gass had said 80% of U.S. households live within 15 miles of a Kohl's store, but did not make a statement about brick-and-mortar's percentage of sales.