Please ensure Javascript is enabled for purposes of website accessibility
Log In Help Join The Motley Fool
Free Article Join Over 1 Million Premium Members And Get More In-Depth Stock Guidance and Research
By Prosper Junior Bakiny - Oct 15, 2019 at 9:30AM

Square seems to be outsmarting PayPal in one key department.

PayPal's (PYPL 0.44%) move to acquire Venmo through the purchase of Venmo's then-parent company Braintree in 2013 got a lot of praise at the time. The mobile payment app was seen as an important asset that would help PayPal solidify its leading position in the mobile payment services industry. Since then, Venmo has become one of the go-to apps for those looking to send and receive money primarily to family and friends, many of whom probably found the platform's social media twist appealing.

Some Venmo stats to consider:

Those are some impressive results. But where Venmo focuses primarily on person-to-person (P2P) payment transactions, archrival Square's (SQ -0.76%) Cash App has taken a somewhat different route, and the outcome has been equally -- if not more -- impressive in some respects. 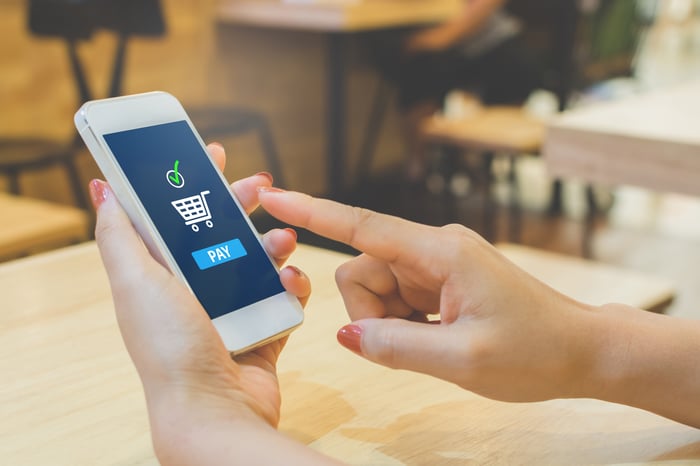 Like Venmo, P2P payment services are also integral to Cash App's core offerings, but the Cash App goes beyond P2P. Cash App also offers services like lending, payroll, and inventory for businesses, prepaid debit cards for consumers with which they have the opportunity to earn cash back on certain purchases, direct deposits, and even bitcoin trading. With these additional resources, Square is looking to transform the Cash App into an alternative banking platform.

The Cash App is looking to compete with established banking giants and steal away a piece of the market. One way it is doing this is by appealing to the low-income and underbanked segments of the population. For instance, the Cash App's direct deposit option seems to be a hit. CEO of Square Jack Dorsey recently noted in a conference call that the P2P payment app sees a "huge surge in downloads" on Fridays because of payday. Further, according to data revealed by Instinet, Cash App is changing its customers' attitudes toward the use of prepaid credit cards, with 45% of customers admitting to using them less after discovering the app. That's also reflected in the more than 3.5 million people using Cash Card.

This presents a massive opportunity for Square, as the tech company builds a strong ecosystem through its Cash App (which had 15 million active accounts at the end of last year), and looks to add more and more functions -- such as stock trades and savings products -- to appeal to an increasingly broader demographic.

While Venmo has more active accounts, the P2P payment app offers relatively few services compared to Cash App. And while the ecosystem and the brand name Venmo has been able to build are useful, Cash App's banking strategy looks far more lucrative. Cash App generated revenues of $135 million in its second quarter, which suggests an annualized revenue of approximately $540 million (compared to Venmo's approximately $300 million).

Cash App won't make banks obsolete, but its business model will build a wider moat than Venmo's unless the latter starts following Cash App's lead and broadens its services.

As things stand, while Cash App does offer a wide array of services beyond P2P payments, giving some of Venmo's users the incentive to jump ship. It is difficult to imagine consumers moving the other way, at least when the two platforms are compared solely on the basis of what they offer (although certain factors, such as ease of use, may still be motivating factors for some to prefer Venmo).

It is also worth noting that the number of app downloads for the Cash App exceeds Venmo's. As of June, Square had registered 56.1 million cumulative downloads, compared to 49.7 million for Venmo.

Cash App might eventually have as many active accounts as its competitor. Considering Cash App's annualized revenues already exceed those of Venmo, that gap will only get wider as the former of these platforms becomes increasingly popular.