Please ensure Javascript is enabled for purposes of website accessibility
Log In Help Join The Motley Fool
Free Article Join Over 1 Million Premium Members And Get More In-Depth Stock Guidance and Research
By Keith Speights - Oct 15, 2019 at 5:00AM

MedMen says its approach is to go deep rather than wide now that the PharmaCann buyout has been scrapped.

One year ago, MedMen Enterprises (MMNFF -6.45%) trumpeted what the company called "a transformative acquisition that will create the largest U.S. cannabis company in the world's largest cannabis market." It was, at the time, the biggest marijuana acquisition in U.S. history. With its buyout of PharmaCann, MedMen would operate in 12 states with licenses for 79 cannabis facilities.

But this marijuana megadeal isn't going to happen. Last week, MedMen announced that it and PharmaCann had terminated their merger agreement. Why did this big deal fall apart, and what's next for MedMen? 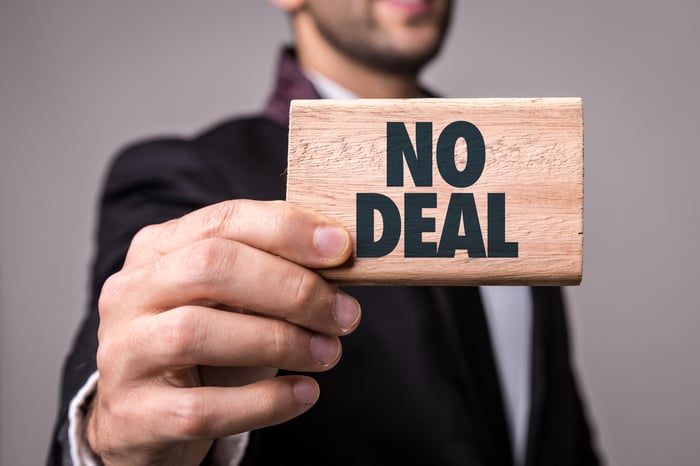 MedMen's original plan was to acquire PharmaCann for $682 million in an all-stock transaction. However, MedMen's share price has plunged more than 70% since the company first announced its plans to buy PharmaCann on Oct. 11, 2018, and has dropped over 50% since the two companies entered a definitive agreement to merge on Dec. 24, 2018.

Although MedMen didn't specifically state that its falling stock price was a reason for the deal being called off, the company did note that capital markets "have shifted" with the Horizons Marijuana Life Sciences Index ETF. It stated that this "underperformance has made it increasingly more critical to allocate capital efficiently given the current industry headwinds."

The bottom line is that MedMen now operates in a much different business climate than it did a year ago. Investors are much more concerned about share dilution than they have been in the past. They're also more focused on cannabis companies establishing clear paths to profitability.

MedMen appeared to recognize these new realities. According to the cannabis retailer, it "does not believe entry into non-core markets is worth the degree of shareholder dilution required by the transaction." MedMen also said that directing financial resources toward its core markets would reward shareholders more than entering new medical cannabis markets where PharmaCann would have to invest significantly.

Going deep rather than wide

With the PharmaCann acquisition scrapped, what will MedMen do now? CEO and co-founder Adam Bierman said that MedMen will "deepen, rather than widen" its reach.

MedMen currently owns licenses for 17 stores in California. The company has applied for additional licenses and hopes to operate 30 stores by the end of 2020. MedMen's California strategy makes sense, considering the state is home to the largest legal marijuana market in the world with total sales expected to top $3 billion this year and grow to more than $7 billion by 2024.

However, MedMen is widening its reach at least somewhat. As a consolation prize, PharmaCann will transfer to MedMen a production facility and a retail store in Illinois along with a retail license in the Greater Chicago area. In addition, MedMen will receive a license for a facility in Virginia. In exchange, the company will forgive around $21 million in debt owed to it by PharmaCann.

Adam Bierman was especially enthusiastic about the Illinois properties and licenses. He stated that "Illinois has emerged as the most attractive opportunity for our longer-term, strategic growth plan. The addition of those assets, without dilution, is a win for MedMen and our shareholders."

The primary problem for MedMen is the same one that continues to weigh on many marijuana stocks: It's still losing money. That means the company will likely need to issue more shares when it runs low on cash, which translates to more dilution in the value of existing shares.

My colleague Sean Williams thinks that MedMen might not achieve profitability until 2022. If Sean is right, it could present some serious hurdles for MedMen stock to make a comeback.

The company says that it expects to achieve breakeven earnings before interest, taxes, depreciation, and amortization (EBITDA) by the end of next year. That would be a good start, but MedMen still wouldn't be truly profitable.

MedMen reports its fiscal 2019 fourth-quarter results on Oct. 28 and plans to provide more details about its path to profitability. The scrapping of its megadeal with PharmaCann could make that path less difficult than it would have otherwise been.