Walmart (WMT -0.50%) has seen its online sales grow at a phenomenal rate over the last few years. Last quarter, the retailer posted 37% growth in e-commerce sales for Walmart U.S. after notching 40% growth the year before. That compares to the 20% growth in North American sales Amazon (AMZN -0.10%) saw in the second quarter.

Walmart's growth has been fueled by the success of its online grocery sales. Curbside grocery pickup will reach 80% of the U.S. population by year-end. Walmart's management has remained relatively quiet on progress with general merchandise sales or its third-party marketplace.

Now it's rolling out two new programs that could boost overall sales but will lose money for the company in the short term. The first program is a subscription same-day grocery delivery program, dubbed Delivery Unlimited, which could eventually expand to more general merchandise. Second, Walmart will subsidize the pricing of certain items sold by third-party merchants on its website with what it's calling the Competitive Price Adjustment program. 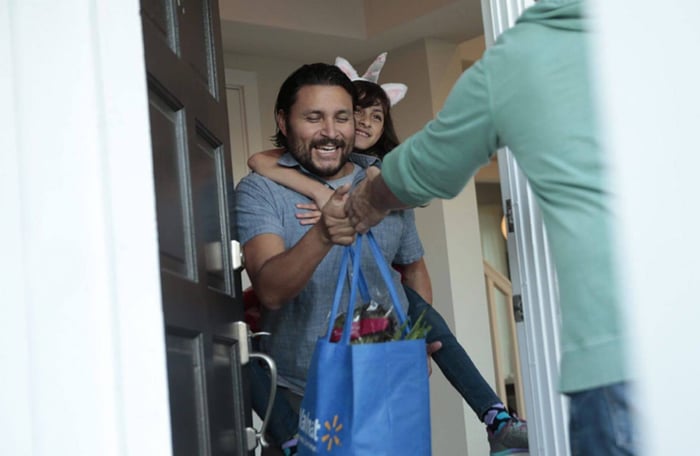 Prime has been a thorn in the side of Walmart and every other retailer for over a decade now. Amazon's subscription numbers continue to grow, increasing customer loyalty, and pushing it to gain market share of the online sales market it already dominates.

Walmart's head of U.S. e-commerce, Marc Lore, says his company needs an engine like Prime to drive customers to use Walmart instead of the competition. "We don't have a reason to say, 'Yeah, I'm gonna use Walmart.com,'" he said at Recode's Code Commerce conference last month.

Lore thinks Delivery Unlimited could be that reason. Combining Walmart prices on groceries with unlimited same-day delivery could make shopping on Walmart.com a weekly habit, Lore hypothesizes. And if Walmart can expand the product selection for the service over time, some consumers may realize they don't even need a Prime subscription anymore.

But that's a long way off.

In the meantime, Walmart will lose money on Delivery Unlimited. But Lore argues the company can lose less money than the competition thanks to having all of its inventory forward-deployed at its 4,756 brick-and-mortar Walmart U.S. stores. Still, it's losing money.

If Delivery Unlimited is winning loyal customers on the level of Amazon's Prime members, it could be a worthy investment. Prime isn't always a moneymaker for Amazon, but no one would argue it's not worth the investment.

Walmart's gearing up for the holiday shopping season by subsidizing the prices of certain items sold by third-party merchants on its marketplace. Walmart will discount the items and reimburse merchants the amount of the discount. The program's only available to select merchants and select items chosen by Walmart.

The move combats a couple programs available on Amazon. There's the Discounted by Amazon program, launched a couple years ago, which works in much the same way as Walmart's Competitive Price Adjustment program. Amazon also recently introduced Sold by Amazon, which gives the retailer full control over product pricing in exchange for minimum guaranteed payouts for the merchants.

Walmart's new program may combat language found in the Fulfilled by Amazon terms, which discourages sellers from offering the same item on competing marketplaces at a lower price. Considering Amazon accounts for nearly 40% of online sales, merchants don't want to risk getting on its bad side. Walmart may help certain merchants skirt Amazon's rules without drawing its ire.

Again, the goal is to give customers a reason to shop on Walmart.com instead of the competition. Walmart is hoping to make shopping on its website more of a habit for consumers because eventually the subsidies that brought them in will go away. Whether the shoppers go away with them will remain to be seen.

Walmart has found that more traditional routes of customer acquisition haven't paid off for general merchandise e-commerce like they have with grocery. The success of Prime is largely to blame. If Walmart really wants to overcome Prime, it needs to give consumers a better option. That starts with Delivery Unlimited and continues to pricing on general merchandise online.

Both of these efforts will be money losers for Walmart, with plans to monetize in the long run with sales of higher-margin general merchandise and unsubsidized third-party sales. Walmart's also working on fulfillment services similar to Fulfillment by Amazon, and it has a small advertising business (both in-store and online). But in order for Walmart to grow those sales, it has to give consumers a reason to choose Walmart.com over Amazon and everybody else.