Please ensure Javascript is enabled for purposes of website accessibility
Log In Help Join The Motley Fool
Free Article Join Over 1 Million Premium Members And Get More In-Depth Stock Guidance and Research
By Alison Healey - Oct 17, 2019 at 7:28AM

Some renewable energy developers have been busy locking in state contracts, leasing federal waters, and preparing to use tax credits on US offshore wind projects. They may be setting themselves up for improved longer-term profits in the evolving yet uncertain industry.

Although offshore wind power projects have been operating in Europe since the early 1990's, the U.S. has been slow to embrace the idea of massive turbines in its oceans. The situation has changed rapidly over the past few years, however, and states like Massachusetts, Virginia, and New York have put sizable mandates in place to speed up construction of the projects.

Avangrid (AGR -0.55%), Dominion Energy (D -0.29%), and Equinor (EQNR -0.03%) are companies that have been partnering with states to build offshore wind farms and operate them for decades, potentially lining up a new revenue source. The companies will be among the first to own offshore wind farms in the US if the projects proceed as planned. The extent of the profit margin for the projects remain uncertain, however, as the all-in costs to build offshore wind projects remain higher than their land-based counterparts. 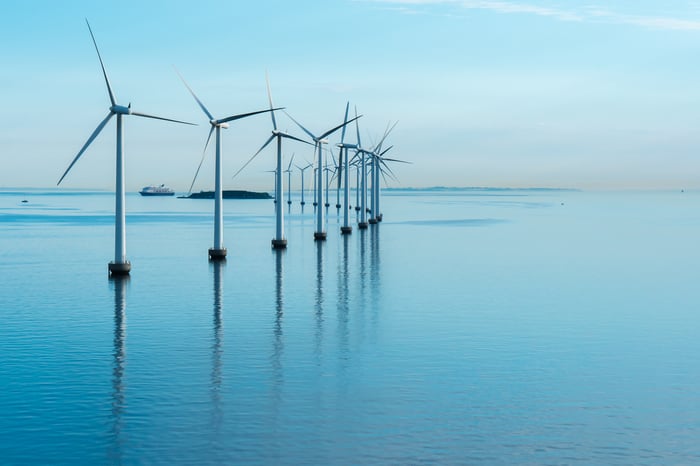 Avangrid is an electric and gas utility and renewables developer with $32 billion in assets and operations in 24 U.S. states. The company has shown an enthusiasm for growing its renewables presence on a big scale and last year was part of the consortium known as Vineyard Wind that won a contract with the Massachusetts Department of Public Utilities.

The company is partnered with Copenhagen Infrastructure Partners to build an 800 MW offshore wind project in two 400 MW phases that will earn revenue from the state for a period of 20 years. Despite the infancy of the market, securing the contract in Massachusetts enabled the company to get a foothold in the US and potentially rack up a portfolio of contracts in future bidding. Vineyard Wind is also bidding for a second project in Massachusetts and a project in Connecticut and is pursuing projects in North Carolina, New York, and California, according to a June Offshore Wind Day presentation from Avangrid.

The timing will also make it possible for Avangid and its partner to reap the benefits of at least a portion of a prized 30% offshore wind investment tax credit (ITC) which will begin being phased out at the end of this year. Avangrid Chief Executive Officer James P. Torgerson said on the company's Q2 earnings conference call he expects the Vineyard Wind project in Massachusetts to be able to capture 24% of the ITC as it makes its US$2.8bn investment.

Dominion Energy (D) is a gas, electric, and renewable energy company that has made a strong commitment to offshore wind development despite its massive portfolio of other assets, including more than 2.6 GW of clean energy in 10 states. The company operates in 18 states and serves nearly 7.5 million utility customers.

Dominion is also developing a small pilot project in Virginia that it said will inform its development of large-scale commercial wind. Dominion is looking to install a total of 2.6 GW of wind turbines in its leased area and plans to use the output to serve its own customers.

Norway's Equinor is a petroleum and wind energy company with operations in 36 countries. The company owns four offshore wind farms in the United Kingdom and Germany and built the world's first floating offshore wind farm off the coast of Scotland in 2017.

In July, Equinor won the bid to develop the Empire Wind project in offshore New York, an 816 MW wind farm. Commercial terms for Empire Wind are being discussed and Equinor expects to ultimately negotiate a long-term contract with the New York State Energy Research and Development Authority (NYSERDA).

Equinor said on its website it sees the U.S. as a "key emerging market for offshore wind, with huge potential along both the east and west coasts, from Massachusetts to California and Hawaii." However, when an analyst on the company's Q2 conference call asked what internal rate of return the company was expecting from the Empire project Chief Financial Officer Lars Bacher said it is "too early in the stage of that development to say something about the returns." 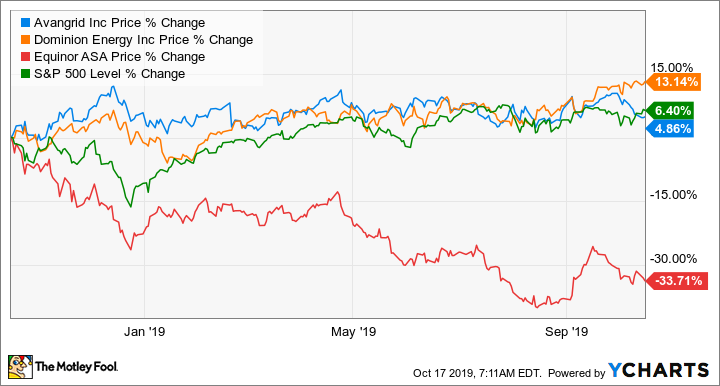 Watch these stocks as US offshore wind develops

Avangrid, Dominion, and Equinor are taking part in solid state-supported initiatives to build offshore wind power and they are all in a position to take care of a generous investment tax credit. But in light of the companies' significant overall asset holdings and cost issues associated with these projects it is too soon to tell if offshore wind will boost profits in a meaningful way. A longer-term investor would be wise to keep an eye on these three companies as US offshore wind projects begin operating and generating revenue over the next few years.