These three stocks are in transition, but if they come through this rough period, the gains could be huge.

In the bodybuilding world, they say "no pain, no gain." Applying that same principle to investing, you could say, "no risk, no reward."

High-risk, high-reward opportunities in the stock market usually come in two different forms: early-stage growth companies that don't make profits and mature companies disrupted by change that are embarking on a turnaround plan.

In today's market, many of the small, unprofitable growth companies trade at very high valuations, which might take away some of their future upside. Therefore, most high-reward opportunities today seem to lie in the beaten-down deep value stocks of companies undergoing turnarounds.

Three such names are AMC Entertainment (AMC 6.79%), CenturyLink (LUMN 2.14%), and GameStop (GME 2.92%). While they're not for the faint of heart, these three stocks could have huge potential upside if their current strategies work out. 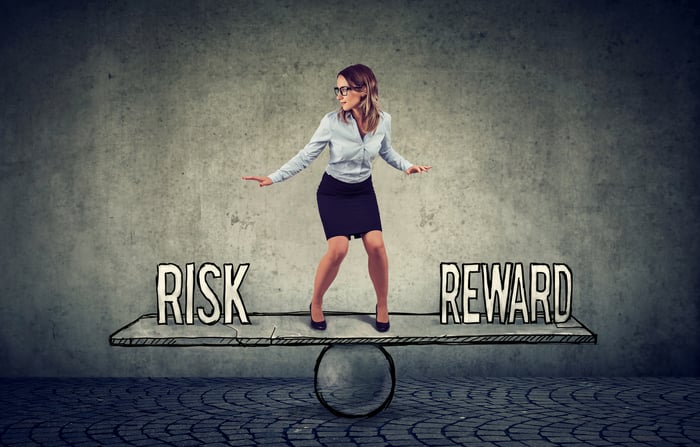 You wouldn't think a company that achieved the No. 1 market share in its industry would be considered risky, yet when the company has done so through debt-fueled acquisitions, it can happen. That's doubly true of a company that operates in an industry many think is in decline, such as movie theaters.

AMC Entertainment is the largest movie theater chain in the world, but it got to be that way through three large acquisitions in 2016 and early 2017, buying U.S.-based chain Carmike and European chains Odeon in Western Europe and Nordic in Northern Europe. In doing so, AMC racked up a whopping $5 billion in debt. That doesn't go over well when many think the theater business could go the way of the buggy whip due to the rise of streaming services.

The combo caused a massive sell-off in AMC's shares, which now sport a market capitalization roughly equal to the company's 2018 adjusted EBITDA (earnings before interest, taxes, depreciation, and amortization). AMC has also seen its dividend yield rise to almost 9% by virtue of its bargain-basement stock price.

Yet there's reason to think the hate has gone too far. While the year-to-date box office is about 5.5% below that of 2018, 2018 was an all-time record year. In addition, 2019 is much more back-end loaded with Frozen 2 and another Star Wars film on the way in December. In 2018, the smash hit Black Panther came out earlier in the year, affecting the comparison.

AMC also isn't standing idly by. In 2018, it rolled out its AMC Stubs A-list subscription program, which has been wildly successful and should become accretive to AMC's profitability this year. AMC is also experimenting with out-of-the-box opportunities, such as showing NFL games at its theaters. And in recent days, AMC rolled out its own new streaming service for its 20 million AMC Stubs loyalty members. The new service has inked deals with the five biggest Hollywood studios and will allow members to rent or buy movies from a 2,000-title catalog as soon as they're available for download.

While AMC's debt load and attendance challenges make the stock risky, its beaten-down valuation combined with a management team that's embracing change is a recipe for big potential gains.

2. CenturyLink: This dividend cut was a smart move

Like AMC, telecom giant CenturyLink also has a dividend yield of almost 9% -- but that's after the company cut its dividend by 54% in February. Needless to say, CenturyLink's stock has not performed well since the announcement. However, the stock's current valuation is tempting; CenturyLink has a market cap of $13.2 billion -- only 4 times management's projected free cash flow for this year.

The culprit behind the pessimism, as it was at AMC, is a high debt load combined with a declining business. CenturyLink made a transformative $34 billion acquisition of Level 3 Communications back in late 2017. However, that transformation drove CenturyLink's debt to more than $36 billion, which became a big concern when the combined company began to show revenue declines in the ensuing quarters. While CenturyLink and Level 3 combined 100,000 fiber-linked buildings across three continents, the company is also burdened by lots of declining legacy technologies, such as copper-based landline phones and low-speed DSL.

Nevertheless, CEO Jeff Storey, who was installed by an activist investor, has done a great job of cutting costs and realizing synergies from the merger. Despite second-quarter revenue declining by about 5.5%, CenturyLink's adjusted EBITDA was about flat from the year-ago quarter.

But the company needs to do more. That's why CenturyLink cut its dividend this year. Not only is the company now better positioned to pay down more of its $36 billion debt load, but management is also investing more in capital expenditures and bolt-on acquisitions, which should grow new enterprise networking businesses to offset legacy product declines.

CenturyLink has also been successful in deleveraging. In May, the company opportunistically bought back hundreds of millions of dollars in high-yield debt at big discounts. That was followed by a successful $1 billion refinancing in September, in which CenturyLink was able to swap out higher-interest debt for lower-interest notes.

Since CenturyLink's core wireline business remains in overall decline, the stock is still a risk. But with Storey investing in new technologies and paying down debt, CenturyLink could present substantial upside if the business stabilizes. Insiders have also bought stock earlier this year around these levels, so at least some executives think things could be looking up.

Unlike the two prior stocks, GameStop doesn't have a big debt load. In fact, it has a small net cash position. However, that hasn't stopped the market from selling GameStop down to just 4.9 times next year's earnings estimates and 0.6 times book value.

The reason is that GameStop's business has been declining, especially its most profitable segment, preowned games. Furthermore, investors fear that digital streaming will eventually displace physical games and potentially put GameStop out of business.

Nevertheless, one famous investor, Michael Burry of The Big Short fame, has a big position in GameStop. His take is that things look worse than they really are since both Microsoft's (MSFT 2.10%) Xbox and Sony's (SONY 0.15%) PlayStation are at the end of their respective console cycles. Both companies are set to release new consoles next year, and these consoles are still likely to have physical disk drives. If they do -- and reps for both companies have said as much -- people will still be buying physical games for the next 5 to 10 years, which means GameStop's business should survive for that length of time as well.

GameStop's current market capitalization is just over $500 million, which is actually lower than the company's entire operating income in both 2014 and 2015 -- the years immediately after the most recent PlayStation and Xbox console releases. While GameStop might not be quite as successful as it was in those prior years, at this valuation, it doesn't need to be. Mere survival could lead to substantial upside.

In addition, new CEO George Sherman is testing out new business models for GameStop's stores based on gaming events such as e-sports. If successful, there could potentially be life after physical games for GameStop -- though that's highly uncertain at this point in time.

While success is far from assured and GameStop needs to ward off extinction in the long run, four directors of the company became more confident in late September, purchasing stock on the open market.