Please ensure Javascript is enabled for purposes of website accessibility
Log In Help Join The Motley Fool
Free Article Join Over 1 Million Premium Members And Get More In-Depth Stock Guidance and Research
By Daniel B. Kline - Updated Oct 17, 2019 at 1:26PM

Will these programs become must-haves for retailers and restaurant chains that hope to hold on to their employees?

A decade of steadily declining U.S. unemployment rates has left companies in many areas facing a shortage of workers, which in turn has led to intensifying competition among businesses looking to hire. In response, some have been offering higher wages -- though those increases have on average barely kept up with inflation. But many companies have been boosting their appeal to potential and current employees by getting more creative with benefits.

Starbucks (SBUX 0.96%) -- which pays a lower starting wage than Walmart (WMT 0.29%) or Target -- has been a leader in the benefits race by offering its employees a path toward a free college degree. The coffee giant will reimburse employees for the cost of earning a bachelor's degree online from Arizona State University. Walmart recently followed with an expanded program that allows its employees to pursue a variety of four-year degrees for $1 a day.

Such programs are a major competitive advantage when it comes to attracting and retaining employees. And this month, another major chain climbed on the free-college bandwagon. 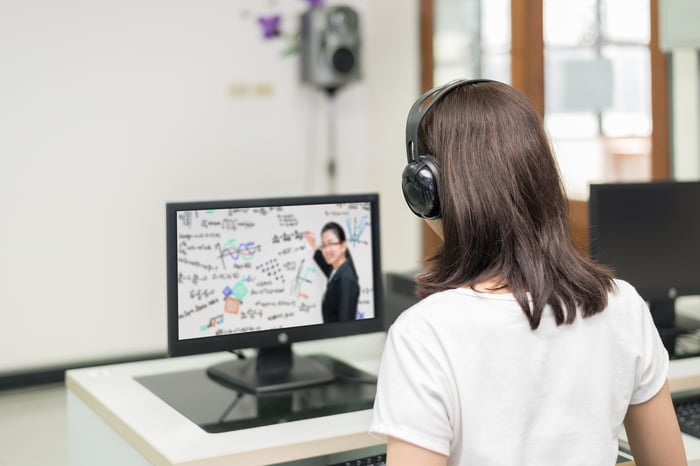 Chipotle Mexican Grill has begun offering its employees the ability to take classes toward their college degrees at no cost. Image source: Getty Images.

Chipotle Mexican Grill (CMG 1.70%) typically pays low starting wages, but it does have a well-established culture of promoting from within. Entry-level employees who want to make a career at the chain can go in knowing there's a clear path for them to eventually work their way into management.

Now, the fast-casual chain is expanding its Cultivate Education benefit to cover 100% of tuition for "75 different types of business and technology degrees through their partnership with Guild Education, one of the leading education benefits companies in the country," according to a press release. The program, which is open to employees who have been with the company for at least 120 days, covers classes at a number of colleges, including The University of Arizona, Bellevue University, Brandman University, Southern New Hampshire University, and Wilmington University.

"Chipotle recognizes that financial barriers can be one of the biggest obstacles that impede our employees from achieving their fullest potential," said Chief People Officer Marissa Andrada in a press release.

If your employer is paying for your college tuition, it more firmly ties you to that company for the years it will take to earn a degree. That's makes it a smart tool for businesses looking to hold onto their employees in a tight labor market where they might otherwise be tempted to job hop. With college costs already exorbitant and rising, it can make financial sense for employees to take a little less per hour in exchange for a path to a free degree.

On the other side of the equation, free tuition may actually save these companies money since recruiting, hiring and training new employees is a significant expense. It also may help companies develop their next generations of management in-house -- people who know the business from the ground up, and have the education to back that experience up.

Depending on how long the current tightness in the labor market persists, this type of benefit may become far more common, especially among employers with large numbers of lower-level jobs to fill.