Please ensure Javascript is enabled for purposes of website accessibility
Log In Help Join The Motley Fool
Free Article Join Over 1 Million Premium Members And Get More In-Depth Stock Guidance and Research
By Maxx Chatsko - Oct 17, 2019 at 6:52AM

American Electric Power is one of the largest utility holding companies in the United States, but it's lagging behind its peers in renewable energy.

American Electric Power (AEP -0.49%) has one of the largest footprints of any domestic electric utility, serving more than 5.4 million customers in 11 states from Texas to Ohio. It owns 26,000 megawatts of power-generating capacity, 40,000 miles of transmission lines, and $69 billion in total assets.

But there's one blemish on the $45 billion company's report card: It's noticeably behind its peers in renewable energy. To be fair, that's not entirely its fault. While it has the financial wherewithal to throw significant resources at renewable energy opportunities, capitalizing on them would be an uphill battle due to its relatively unfavorable geography. Nonetheless, management is now making a long-overdue push into the space. Can its aggressive strategy turn American Electric Power into a renewable energy stock to be reckoned with? 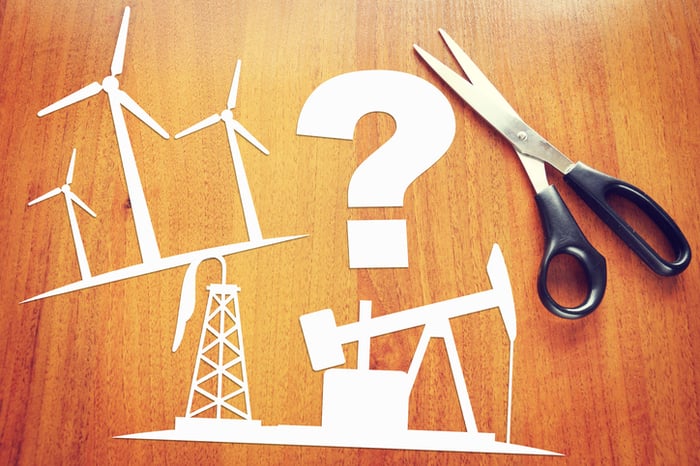 Power generators and electric utilities are increasingly turning to wind and solar due to their favorable economics. Better technology and grid connections have combined to significantly reduce the cost of electricity generated from wind turbines and solar panels in recent years. Couple that with the fact that wind and solar farms don't require constant refueling, and it's easy to grasp how power portfolios that lean heavily on modern renewables can generate significant savings for companies and customers alike.

In fact, onshore wind is expected to be the lowest-cost source of energy by 2023, while solar-plus-energy-storage systems will be at least on par with natural gas at that time, price-wise. American Electric Power is eager to capture some of those savings.

The company estimates that wind, solar, and hydropower will account for 16% of its total power-generating capacity at the end of 2019. That includes recent acquisitions totaling 951 megawatts of net capacity. It has plans to add over 8,500 megawatts of wind and solar capacity over the next decade, bringing its total to over 13,000 megawatts by the end of 2030.

Given the clear financial benefits, investors should certainly praise these efforts. However, the company still must be measured against the yardstick of its peers. Xcel Energy (XEL -1.02%) expects to own and operate 9,300 megawatts of wind power alone at the end of 2019, which will represent half of its total power generating capacity. Renewable sources produce 25% of its total electricity (generating capacity and actual electrical output aren't the same thing) today, and Xcel forecasts that percentage will rise to 46% by 2027.

Similarly, NextEra Energy (NEE 0.88%) owns 18,000 megawatts of wind and solar power capacity through its NextEra Energy Resources (NEER) subsidiary. That represents 75% of NEER's total power capacity, and allows it to generate more electricity from the wind and sun than any other company on the planet. While the parent's Florida utilities are nearly bereft of renewable energy generators (wind isn't a viable option in the Southeast), it has ambitious plans to add about 10,000 megawatts of solar power capacity in the Sunshine State by 2030.

With that added context, the drag from American Electric Power's slow transition to renewable energy definitely shows up in the numbers when one compares the total stock returns (share performance plus dividends) of those three companies. Although, to be fair, all three of these energy stocks have easily beaten the five-year total return of the S&P 500, which has "only" been 78%.

American Electric Power's dividend may offer a higher yield than its peers, but it also hasn't seen delivered nearly as much share price appreciation in the last five years. And that relatively high dividend yield could sap long-term returns by keeping the business in a perpetual state of catch-up when it comes to renewable energy.

For example, if the company's annual payout were cut to a level that would yield 2.2% instead, the business would have an extra $330 million per year to invest in renewable energy projects. Considering American Electric Power intends to spend only $2.2 billion on renewable energy over the next half-decade, that hypothetical re-allocation of resources would allow it to increase its strategic wind and solar budget by 75%.

American Electric Power is making a push to increase the share of power it generates from low-cost renewable energy, but investors would be justified in questioning whether it's doing enough. The acquisitions it made in 2019 and its plans for capital expenditures through 2023 look comparatively small next to those of its peers. Reflective of that, the company will end this year with coal-fired power plants providing 46% of its total power capacity -- nearly double the average level among utilities nationally. Simply put, it's great to see the business start to invest more capital in renewable energy, but it has a long way to go before investors can take those efforts seriously.