Please ensure Javascript is enabled for purposes of website accessibility
Log In Help Join The Motley Fool
Free Article Join Over 1 Million Premium Members And Get More In-Depth Stock Guidance and Research
By Prosper Junior Bakiny – Oct 17, 2019 at 8:02AM

This new initiative could help Shopify fight off strong challengers.

Shopify (SHOP 0.67%) has been red hot over the past several years: The company's share price is up by more than 1000% since 2015. One of the factors behind this performance is the company's perceived competitive advantage. There are scores of e-commerce websites, but few offer the possibility to create highly customized online stores coupled with marketing tools and the ability to reach potential customers on popular social media websites, among many other perks. This model has set Shopify apart from its peers, but with the e-commerce industry still showing strong growth potential, it was only a matter of time before other top companies threw their proverbial hats into the ring and tried to beat Shopify at its own game. 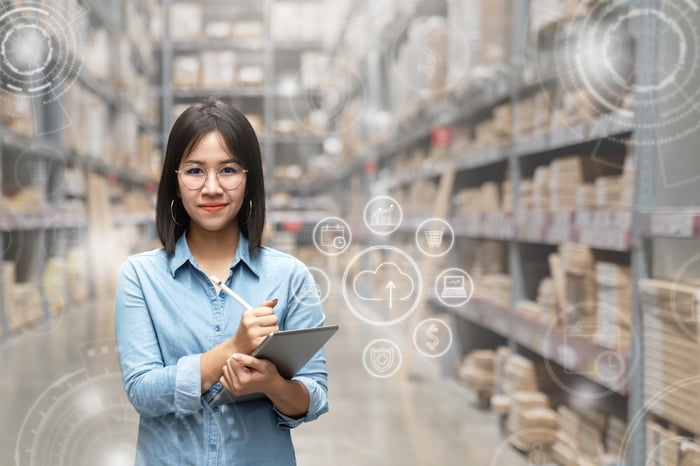 The list of companies challenging (or looking to challenge) Shopify reads like a mini all-star lineup of the tech industry. They include none other than Microsoft, Facebook, and Square.

First, Shelley Bransten, VP of Microsoft's retail and consumer goods, spoke about the possibility of the company entering the e-commerce industry, because, in her own words, "our customers are asking us for it."

But while the computer software manufacturer has made few strides in that direction, Facebook has already made a move to get in on the act. Back in April, the social media giant launched in-app checkouts via its subsidiary Instagram. The concept is simple: When Instagram users come across a product they like, they can simply purchase it directly on the app; the user's information is also saved for future transactions.

Perhaps the biggest challenge to Shopify is coming from Square. The tech company joined the party by launching its own online store, giving business owners the option to sell their products directly through customized digital storefronts. Square boasts a strong ecosystem of business owners, making its task of attracting customers for this new service that much easier.

These developments risk eating away at Shopify's market share, but the company isn't resting on its laurels, either.

Shopify recently unveiled a list of innovations it will add to its platform, including new language capabilities and a faster point-of-sales system, among others. However, none of these new initiatives has received as much press as the company's fulfillment network.

The idea behind Shopify's fulfillment network is to help business owners get their orders to their customers in a faster and more cost-effective way, which fits well within the company's mission to give merchants all the tools they need to run their businesses as efficiently as possible without having to waste time on boring technical details. Clearly, this move will put Shopify in competition with Amazon, but it will also give the e-commerce giant a leg up on Square and other companies looking to enter this lucrative industry.

But one major caveat needs to be addressed. Shopify is spending a small fortune on ramping up this initiative. The company acquired 6 River Systems -- a privately held provider of warehouse fulfillment solutions -- for about $450 million. Shopify expects this acquisition to have "no material impact" on its top line for the current fiscal year, but it will increase its expenses by about $25 million. Despite the negative short-term impact, this initiative could help Shopify maintain its competitive advantage and attract increasingly more merchants to its platform.

Shopify is no stranger to innovations, and despite new challenges coming from various corners of the tech industry, the company is poised to stay one step ahead. Shopify's fulfillment network will take time and lots of cash to build, but once it is fully operational, rivals will have a hard time catching up.