Streaming video veteran Netflix (NASDAQ:NFLX) reported third-quarter earnings Wednesday night. This stock usually soars if the company beats analyst estimates and management guidance on subscriber additions, and it's likely to crash hard if there's a shortfall on that particular metric. But Netflix came up short on third-quarter subscriber additions without sparking a panic. Instead, the stock surged as much as 10.9% higher in after-hours trading.

This is a new party trick. Here's how Netflix pulled it off.

Sure, Netflix missed the marquee metric again, but not by much. Guidance had pointed to 7 million net new paying subscribers and the final tally was 6.8 million additions. The second-quarter crash was triggered by a much larger margin, delivering 2.7 million new customers when guidance had called for 5 million.

Restating the same numbers from a different perspective, Netflix grew its paid subscriber count by 21.4% year over year or by 4.5% compared to the previous quarter. The official guidance target was pointed at 21.6% annual growth or a 4.6% sequential increase. That's a rounding error on a massive subscriber base of 158.3 million accounts around the world.

In other words, the second-quarter miss really was an outlier and the guidance for this quarter turned out to be Netflix's most accurate forecast in years: 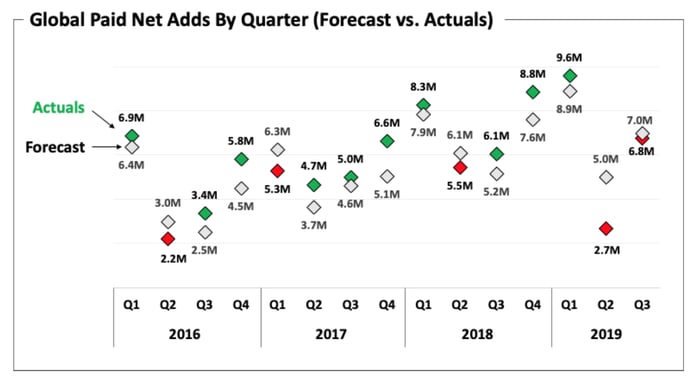 It also helps that Netflix delivered solid financial results around this minuscule subscriber shortfall. Revenue rose 31% to $5.24 billion, outpacing the subscriber additions thanks to higher monthly fees rolling out in the past year. Management pointed to these price increases as the biggest contributor to slower subscriber additions.

Operating margin came in at 18.7%, well above the 15.9% guidance target. Just like in the second quarter, management noted that a significant amount of marketing costs were pushed toward the end of the year, leaving more operating income on the table in the short term. Expect an absolute marketing blitzkrieg in support of key fourth-quarter titles such as Martin Scorsese's The Irishman, Anthony Hopkins drama The Two Popes, and Michael Bay/Ryan Reynolds action romp 6 Underground.

The same investors who ran for the fire exits when Netflix's second-quarter report came up short are rushing back to the buying window today. The big miss three months ago was not the start of a subscriber exodus after all. Some critics had feared that would be the case due to the upcoming spate of fresh competition.

The stock still trades more than 16% below the prices seen in mid-July, right before the second-quarter report. All is not forgiven -- not yet -- but I do think we're unlikely to see Netflix shares plunging anytime soon. This report should have a sobering effect on nervous traders and market makers -- and the company is probably setting up for a bigger bounce when the next earnings report drops in.

Netflix is downplaying the fourth quarter's prospects, forecasting global subscriber additions at roughly 7.6 million new names. That's below the 8.8 million additions seen in the fourth quarter of 2018. Call me crazy, but that fourth-quarter slate of crowd-pleasing original movies and the accompanying marketing blitz could result in a stronger surge over the holidays. We've seen this movie before, with market-moving results.

As a Netflix shareholder, I wouldn't mind a rerun in early 2020. This was just a tasty trailer for the real main event.