Keeping up with the news from major medical meetings has become a requirement for healthcare investors.

While earnings season is under way, investors in biotech stocks must also stay abreast of the latest data emerging from major medical meetings. At these events, biotech and pharmaceutical companies vie for top billing to showcase the latest results on clinical trials and new drug candidates. 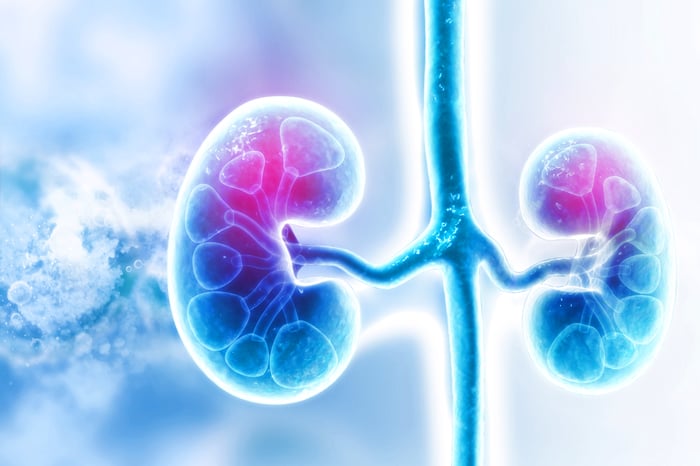 Apellis takes on the complement system

Apellis will present data from eight patients in the complement 3 glomerulopathy (C3G) cohort of its ongoing phase two clinical trial with the drug candidate APL-2. In C3G, an overactive immune system degrades the protein C3, causing fragments to be trapped in the kidney. The resulting buildup leads to inflammation and organ damage. According to the company, 30% to 50% of patients diagnosed with C3G will have kidney failure within 10 years of diagnosis. Apellis' APL-2 seeks to stop the body from attacking the C3 protein, a key mediator of the immune system's complement pathway."

While this marks the first clinical data from this group of patients, APL-2 is also being evaluated in several rare hematology indications, as well as for geographic atrophy, an ophthalmic disease. Last month, Ra Pharmaceuticals (RARX), another biotech company developing drugs targeting the complement pathway, announced an agreement to be acquired by Belgian specialty pharma UCB. This demonstrates that targeting the complement system is continuing to gain steam as a viable, and lucrative, pathway.

Reata aims to keep up the momentum

Reata may add to its hot streak during Kidney Week with presentations focusing on the company's lead pipeline candidate, bardoxolone methyl, and its impact on kidney events and cardiovascular safety. Additionally, data will be presented on the mechanism behind bardoxolone methyl and Reata's other drug candidates.

This past few weeks have been busy for Reata. The company reacquired global rights to some of its drug candidates from AbbVie (ABBV 0.62%) and presented positive clinical data in a study involving omaveloxolone to treat Friedreich's ataxia. Reata's stock skyrocketed 70% since those results were announced, and reports on its phase-three clinical trial with bardoxolone methyl for Alport syndrome are expected before the end of the year. While the Kidney Week presentations will show Reata to be a strong investment candidate, the most important major near-term catalyst is the pending phase-three results.

Retrophin will provide new data from its phase-two trial

Retrophin announced that it will present new quality-of-life data from its ongoing phase-two trial of Sparsenten for focal segmental glomerulosclerosis (FSGS). In phase one, the company was able to demonstrate a greater than twofold reduction in proteinuria for patients treated with Sparsenten. A pivotal phase-three trial that will serve as the basis for approval in the U.S. and Europe has commenced enrollment, with interim top-line data set to be reported in the first half of 2021.

Additionally, at Kidney Week, Retrophin will present preclinical findings evaluating Sparsenten for Alport syndrome. The data will show Sparsenten's ability to slow kidney disease, prevent hearing loss, and extend lifespan (keep in mind that so far this is in mice, not humans!). Alport syndrome, which affects nearly 60,000 in the U.S., leads to end-stage kidney failure. There are currently no approved treatments, and Reata's phase-three trial could make bardoxolone methyl the first. That said, Sparsenten works by a different mechanism, so both drugs could provide benefit to patients should they succeed.

Retrophin's management would like to see the stock price reverse course; currently trading in the mid-$11 range, it is down 50% from the start of the year. The Kidney Week presentations may help a bit. However, Retrophin's value will be driven by its three marketed products, and ultimately by the outcome in 2021 of Spasenten in FSGS. Investors who expect roaring success may want to buy in now, while those who are less convinced could prefer to wait and see.