In the current low-growth environment, Bank of America (NYSE:BAC) has regularly touted its impressive streak of positive operating leverage on its earnings releases and conference calls. Over the past 4.5 years, Bank of America's revenue growth has outstripped its expense growth in each and every quarter, even in quarters when the bank's revenue declined. This has been due to CEO Brian Moynihan and his team continuing to find new ways to strip out legacy costs from Bank of America's expense base, all while investing in technology and automation.

Until now, that is.

On the bank's recent third-quarter earnings release, Bank of America revealed that its 18-quarter streak has finally come to an end. However, Bank of America's stock actually rose on the news. Why did that happen? 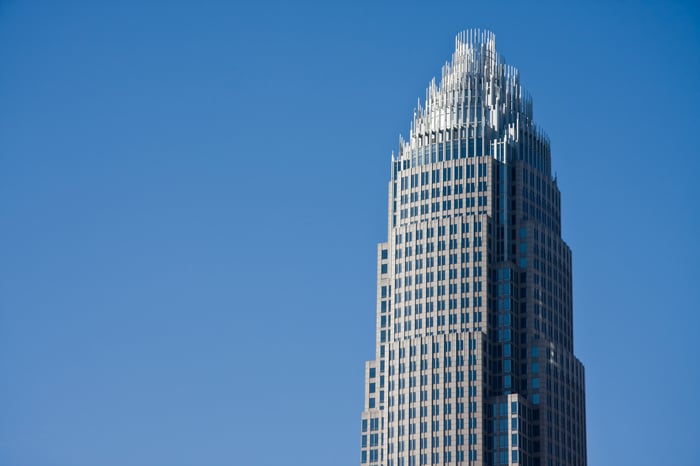 The top of the Bank of America tower in Charlotte, North Carolina. Image Source: Getty Images

Missed it by that much

First, Bank of America's operating leverage decline was minuscule. As the lower-interest-rate environment ate into the company's net interest margins, it flattened Bank of America's revenue growth to just over 0% from the prior-year quarter, even as the bank grew both deposits and overall loans and leases at a healthy 4% clip. At the same time, the bank continued to invest in technology and salespeople in new markets, leading to expense growth of 1%, when stripping out a one-time impairment charge due to the bank's ending its JV partnership with First Data (now part of Fiserv). Addressing the end of the streak on the company's conference call with analysts, CEO Brian Moynihan said:

The question we ask ourselves is how much flexibility ... we want to leverage from initiatives spending on technology or infrastructure or hiring. Or do we keep investing to build our market share and momentum? As we talk to the investors who own substantial portions of our stock, they continue to tell us to invest in our client and customer successes, to take the advantage of our strong position, and continue to invest in times. ... But even with that, you can see in this chart that we maintain our discipline around operating leverage.

Investors may have chosen to overlook this exceptional quarter for a couple of reasons. First, operating leverage was just barely negative, with expense growth of just 1% versus revenue growth of close to 0% (but still positive). Second, the bank actually saw some unusually high litigation costs of $350 million in the quarter, which was elevated above the company's normal $100 million run rate. Adjusting for this, it's possible Bank of America could have met its targets and continued its streak.

Disciplined in the near term, focused on the long term

Moynihan pointed to conversations with the bank's large investors, and that likely means Warren Buffett, who has made Bank of America his largest position in the financial sector and his second-largest publicly traded security, behind only Apple. It's no surprise that Buffett, who is famously focused on the long term, gave Moynihan the green light to spend what he thought necessary to maintain Bank of America's competitive advantage in scale and technology.

The bank was able to grow deposits and loans at a healthy rate, losses and charge-offs remained low, and it only barely missed achieving positive operating leverage even in this difficult environment. Therefore, it's no surprise to see investors giving the bank a pass after its earnings release.

Bank stocks, in general, are quite cheap compared with the market, as investors fret about the direction of interest rates and the trajectory of the U.S. economy. Therefore, even a solid, if not spectacular, earnings report has the potential to boost Bank of America's shares to the upside, and we saw that following this recent earnings release.

Look for Bank of America to continue to buy back stock at this low valuation, and continue raising its dividend for the foreseeable future.