Ten years ago, Bank of America (NYSE:BAC) was one of the more infamous brands on Wall Street. Yet a decade on from the financial crisis, the company has become one of the best-managed banks in the country.

As evidence, the bank just posted a stronger-than-expected quarter, even in a challenging environment for banks. With expectations of slowing growth and potential Fed interest rate cuts, long-term interest rates have fallen, which has squeezed banks' margins.

In fact, I had previously thought that the current environment could end Bank of America's streak of positive operating leverage. However, BofA managed to extend this streak to its 18th consecutive quarter. Here's how the company did it and why it's important. 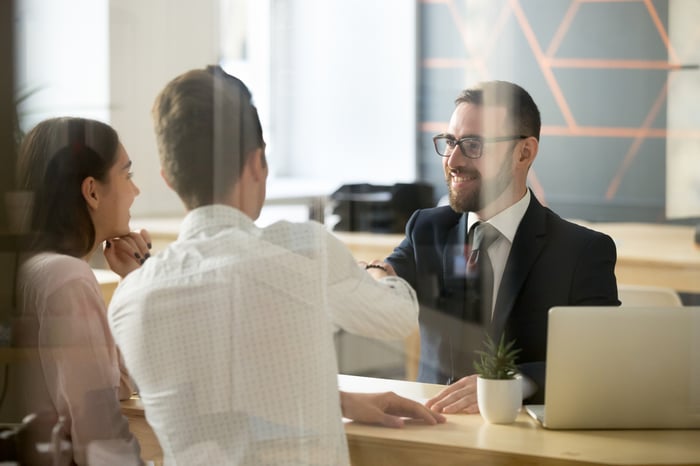 What is operating leverage?

Operating leverage occurs when revenue grows faster than expenses, meaning that profit margins expand. Notice, in the chart below, that BofA's streak began during difficult times for the bank in the first quarter of 2015, when revenue growth was negative 7%.

Nevertheless, Bank of America was able to cut its expenses by a whopping 29% that quarter, and similar declines and cost cuts continued throughout that year before revenue turned positive and cost cuts became more modest. Nevertheless, in every quarter since then, CEO Brian Moynihan and his managers have maintained that discipline and done an excellent job streamlining back-office systems, letting headcount decline through natural attrition, and paring back real estate. But while all that was happening, Bank of America was still investing heavily in renovating bank branches and new technology, such as the bank's digital assistant, Erica.

In the current quarter, revenue rose just 2%, yet expenses held relatively flat -- which actually counts for a heavy spending quarter by recent historical standards. The bank's efficiency ratio, or noninterest spending as a percentage of revenue, came in at 57%, improving by more than a full percentage point. That allowed pre-tax income to grow at a higher 5% rate, while earnings per share surged a whopping 17%, thanks to buybacks and a slightly lower tax rate.

When will it end?

Though Bank of America has had four and a half years of positive operating leverage, management has been able to cut expenses in 9 of the last 10 years. This year, management has guided to slightly lower expenses as the company makes even more aggressive investments in technology and continues on its journey to raise its minimum wage to $20 within the next two years.

That likely means that the bank will have to grow this year in order to keep the streak alive, which may be difficult in the current interest rate environment. But on the conference call with analysts, CFO Paul Donofrio said that if long-term rates stabilized for the rest of the year, net interest income would be up 2% this year over 2018, and if the Fed were to cut rates twice, Bank of America's net interest income would likely rise by 1%.

CEO Moynihan was also asked about the levers the bank could pull in a potential crisis. He said:

If there are severe economic issues ahead, we have the flexibility to continue to reshape this expense base. Obviously, starting with revenue-related cost, which would adjust quickly and automatically and then changing our investment strategies. I can assure that these areas we focus on and are on our mind just as on your mind.

Even after the stock's slight rise after its earnings report, Bank of America still trades at just 10.5 times earnings, which is screamingly cheap in today's market. Though revenue growth and net interest margins may continue to disappoint this year, Bank of America should still generate good profits based upon this laser focus on expenses. With an increased dividend and recently raised share repurchase program, investors could do a lot worse.