Because banks earn money by "borrowing" through low-cost deposits and lending at higher rates long term, they're always looking for ways to attract depositors that don't involve paying higher rates of checking and savings accounts or depending on longer-term CDs. One way is to deliver a differentiated customer service. Some analysts think larger financial institutions are better positioned to deliver a better customer experience, owing to their ubiquitous national footprint and ability to invest in leading digital tools.

Bank of America (BAC 0.24%), one of the "big four" U.S. banks, is celebrating the first birthday of its digital banking assistant Erica, a feature B of A hopes will give it a leg up on the competition. Erica is more like a specialized financial version of Amazon's (AMZN -0.77%) Alexa or Apple's (AAPL -1.96%) Siri, and B of A is steadily ramping up its capabilities and users. Here's what Bank of America wants you to know. 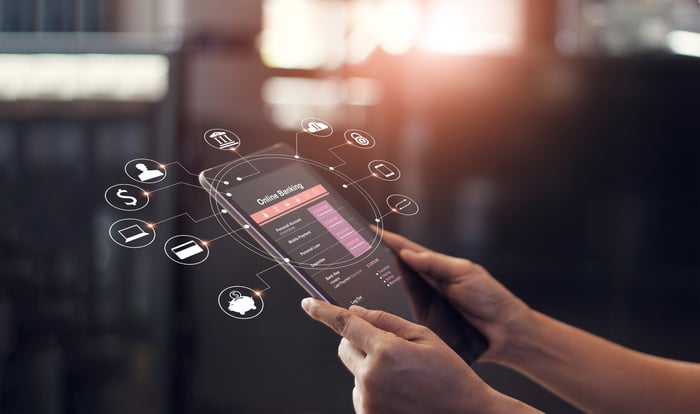 Erica has lots of capabilities. Through Erica, Bank of America customers can instantly send payments through Zelle, pay bills, view FICO scores, retrieve account or routing numbers, close down lost cards (or open them back up if found again), and perform a number of other functions, all instantly through tap, voice, or text command.

All in all, Erica has surpassed 7 million users and is gaining new customers at the rate of about a half million per month. Since launching, Erica has completed more than 50 million client requests.

A broad customer base

Bank of America prides itself on having a broad national footprint, catering to a wide range of consumers, and Erica's user base reflects this. Though about half of Erica's users are millennials, the remaining 50% is split among Gen Z, Gen X, and baby boomers. You might think that seniors would be reluctant to use an advanced digital tool such as Erica, but a healthy 16% of Erica users are baby boomers and seniors.

David Tyrie, head of advanced solutions and digital banking at Bank of America, said in a recent press release that "it's been a solid first year, but we're just beginning to scratch the surface of Erica's full potential to transform the client experience and help them live their best financial lives." The company also said it has doubled the number of ways that customers can ask questions, from 200,000 to 400,000, since the app was launched in June 2018.

As Erica improves, it could very well give Bank of America an advantage in attracting and retaining customers in the years ahead. That will be even more important if the yield curve narrows or inverts once again, as every extra-low or no-cost deposit Bank of America brings in will protect it against a potential squeeze in net interest margins. Bank of America is well on its way, ranking first in U.S. deposit market share, and growing overall deposits by 5% last quarter.

As has been the case with so many digital and internet-based businesses, it looks like the strong are only poised to get stronger. This looks to be the same in the financial world as well, with the biggest U.S. banks rolling out leading digital tools like Erica.