The death of Clips marks Google’s latest step away from wearable and VR cameras.

Two years ago, Alphabet's (GOOG -0.01%) (GOOGL -0.02%) Google launched Clips, a wearable camera that automatically captured photos and videos without any user interaction. The $249 device, which could be clipped to clothes or set down, used an AI algorithm to recognize people and start capturing content.

At the time, some analysts thought Clips could become a potential rival to GoPro's (GPRO -0.74%) cameras. I thought it was a creepy experiment designed to train Google's computer vision AI instead of aggressively competing against GoPro. 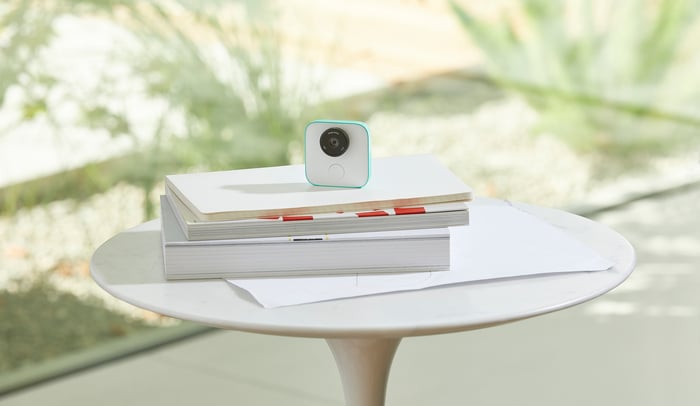 That's why I wasn't surprised when Google recently discontinued Clips to focus on other hardware projects instead. Let's see why Google abandoned its oddball camera, and what that exit tells us about Google's outlook for wearable cameras.

Why did Google abandon Clips?

Google never disclosed any shipment numbers for Clips, but Sensor Tower recently told TechCrunch that its companion app was installed only about 15,000 times. GoPro shipped over 4.3 million cameras last year.

Clips flopped because Google barely marketed the device, and many consumers who heard about it were stunned by its creepiness. Google promoted Clips as a clever way to automatically capture precious moments with your kids and pets, but neglected the intrusive nature of an always-on camera.

Google subsequently integrated Clips' AI technology into the Photobooth feature for its newer Pixel phones, which automatically takes photos of people looking at the camera, smiling, or puckering their lips. That decision indicated that the stand-alone camera's days were numbered.

Google recently unveiled a wide range of new hardware devices -- including Pixel 4 smartphones, the new Pixel Buds, the Pixelbook Go Chromebook, and new Nest devices -- at its big product event in mid-October. With all those new products coming in, it was time to clear out some older devices -- so Clips, its Daydream View VR headset, and the original Pixel Buds were all discontinued.

Backing out of the VR and camera markets

Google's decision to abandon Daydream and Clips weren't its first big steps away from the VR and wearable camera markets. Last year, Google abandoned its development of a high-end cinematic VR camera with IMAX (IMAX 0.25%). Earlier this year, it shuttered its Spotlight Stories VR film studio and discontinued Jump, an ambitious VR video program that had attracted GoPro as its first major partner.

Those moves all indicate that Google no longer considers VR and wearable cameras to be promising growth markets. That's bad news for GoPro, which is still betting heavily on both markets.

GoPro's new MAX camera, its successor to the Fusion, captures 360-degree videos that are ideally viewed in VR headsets. Its new flagship device, the Hero 8 Black, is squarely aimed at outdoor enthusiasts who want to capture 4K videos at 60 fps.

Clips doesn't matter to GoPro ... but the big picture does

Google's Clips was never a serious threat to GoPro, and its death was overdue. However, Google's waning interest in wearable cameras and VR devices -- along with its integration of some of their features into its new smartphones -- is worrisome.

GoPro's stock plunged about 95% over the past five years as its action camera sales decelerated, new competitors entered the market, and smartphone cameras improved. Its sales notably rebounded in the first half of 2019 as some consumers upgraded their aging cameras to the Hero 7 Black, but I think that marked a cyclical peak that won't be surpassed by sales of its new Hero 8 Black and Max cameras.

To reduce its dependence on long upgrade cycles within its niche market, GoPro needs to reach more mainstream consumers. Google's recent decisions indicate that there's not much of a future in cheaper wearable cameras or 360-degree videos -- so GoPro might need to look beyond those tired markets to keep growing.