Please ensure Javascript is enabled for purposes of website accessibility
Log In Help Join The Motley Fool
Free Article Join Over 1 Million Premium Members And Get More In-Depth Stock Guidance and Research
By John Ballard - Oct 19, 2019 at 11:18AM

The iPhone maker spends $15 billion a year on new products and services.

No matter how much Apple (AAPL 2.62%) talks about its services growth every quarter, Wall Streeters are still worried about those iPhone sales. The iPhone is still the engine that makes Apple tick, providing most of the company's revenue. But with iPhone revenue down 15% year over year over the last three quarters, some analysts wonder if services can really keep Apple growing.

Investors have certainly bought in to the strategy. The stock is up 49% year to date, as the services segment continues to post double-digit growth, including AppleCare, iCloud subscriptions, Apple Music, the App Store ad business, and Apple Pay. 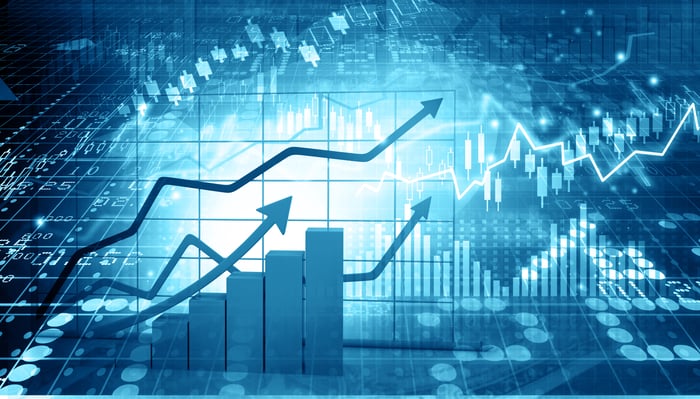 Apple is still in the early innings of its services growth story, a story that's only making its competitive moat even wider. Apple has such a strong brand that it can sell millions of iPhones, iPads, Macs, and iWatches every quarter at premium prices, and yet the company has a growing installed base of 1.4 billion users. The future success of Apple is shifting from how many new devices it sells every year to how it monetizes that massive installed base, which is why growth in services is so important.

The company is on pace to double its fiscal-2016 services revenue by next year. Services became more of a focus for investors when Apple announced a whole suite of them earlier this year, including Apple News+, Arcade, the Apple Card, and the Apple TV+ streaming service, which launches next month. All these new subscription services should keep the momentum going for a segment that has grown 16% year over year through the first three quarters of fiscal 2019.

Investors love services because they generate healthy margins and help smooth out sales of pricey gadgets. While Apple earns an industry-leading margin on its hardware devices, services are twice as profitable. Through the fiscal third quarter, services made up only 21% of total revenue but totaled 36% of the company's gross profit.

The knock against the services story is that growth has decelerated over the last year, but unfavorable currency headwinds are partly to blame. Stripping out the impact of currency, services revenue increased by a healthy 18% year over year. The new Apple Card (which launched in August) and Apple TV+ (launching Nov. 1) should all but guarantee that services remain a significant growth driver. But keep in mind that Apple is giving away a year of TV+ for free to anyone who buys a new iPhone, so there will be a delay in realizing the full revenue impact of the streaming service.

The hardware business is not dead

While Apple may never see double-digit growth out of its products segment again, the decline in revenue we've seen over the last three quarters is likely not going to continue either. While analysts expect total revenue to be slightly down this year, the current expectation is for revenue to grow 4.6% in fiscal 2020, which would assume some stabilization or growth out of the products segment.

The latest reports show that iPhone 11 and the Pro version are selling much better than analysts originally expected. Apple has reportedly increased production by 10%, or 8 million units, to meet the demand. It seems Apple's focus on marketing the new phones with improved cameras and several new colors is working well. Throwing in a year of TV+ for free (a $60 value) certainly had to help, too.

Are there any new products on the horizon?

There are plenty of rumors swirling that Apple's next product will be some kind of headset or glasses with augmented reality (AR). Widely followed Apple guru analyst Ming-Chi Kuo of TF International Securities says Apple could release an AR headset early next year. This fits what we know about Apple, which is that the folks in Cupertino, California, are pushing the software capabilities of their hardware.

Over the last few years, the company has started to tout the AR features of iOS. Apple has acquired at least a few companies in recent years that specialize in AR and animation technology. Apple just recently acquired IKinema, based in the U.K., which develops visual effects software with a focus on augmented reality.

Acquisitions are nothing new for Apple. The company behaves like a serial acquirer. Through the first three quarters of fiscal 2019, Apple spent $611 million on acquisitions, up from $431 million last year. The company typically buys several small companies every year that specialize in different technology fields that ultimately find their way into a new product or service.

Although there is the perception that Apple has lost its touch with new product development in a post-Steve Jobs era, I think the Cupertino-based company is still pushing the envelope, just not in the ways we're used to seeing.

Apple is clearly investing for the future. The company spent $15.86 billion on research and development over the last year. That's up tenfold over the last decade. But a lot of that is going to new hires, infrastructure, and new materials to support the growth of the services business. Nonetheless, that significant increase in spending suggests that Apple sees a long runway of growth in its business.

Apple doesn't look undervalued, but that doesn't mean it's not a good investment. The stock trades for a forward price-to-earnings ratio of 18 times next year's earnings estimates. At that valuation, I would expect the stock price to track future earnings growth, and analysts currently expect Apple to grow earnings about 9% annually over the next five years. The stock also offers a 1.34% dividend yield, funded by a massive cash pile on the balance sheet.

With the services business slowly contributing more to the top line every year, and with tens of millions of people spending top dollar to own an iPhone or Mac, I believe Apple has reached the level of dominance in consumer products that should make any investor feel comfortable buying shares even at the current high.