Please ensure Javascript is enabled for purposes of website accessibility
Log In Help Join The Motley Fool
Free Article Join Over 1 Million Premium Members And Get More In-Depth Stock Guidance and Research
By Adam Levy - Oct 11, 2019 at 9:50AM

Apple has a unique portfolio of services -- and the ability to offer immense value by packaging them together.

Apple (AAPL 0.63%) is working on packaging its popular Apple Music streaming music service with its soon-to-be-launched Apple TV+ streaming video service. It's facing a slight hiccup in its negotiations with record labels, according to a report from Financial Times, but Apple still largely controls its bundling destiny. It's willing to bring together Apple Music and Apple TV+ for just $12.99 per month -- a $2 per month discount -- without changing its royalty payment structure to labels.

Apple is also considering a bigger bundle of services that could add Apple Arcade and Apple News+ into the mix. The company also offers subscriptions for iCloud and Apple Care, not to mention the iPhone Upgrade Program, which lets consumers upgrade to the tech company's latest and greatest iPhone every year for a flat monthly fee. With Apple's growing portfolio of subscription options, it has the potential to offer consumers a bundled package that could prove just as important to its business as Prime is to Amazon (AMZN -0.26%). 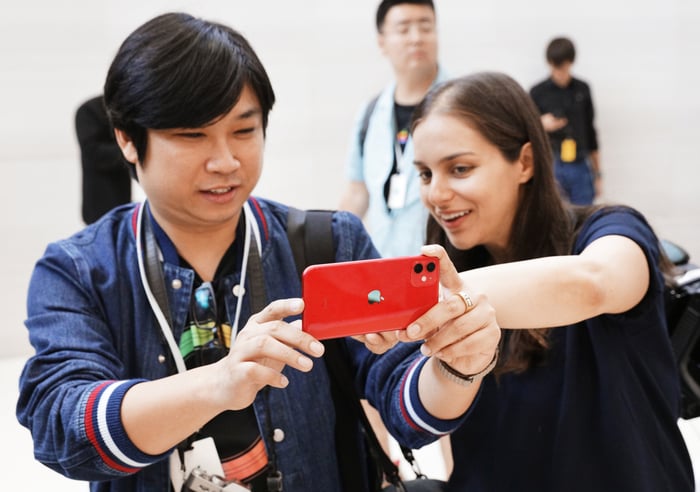 The idea of a bundled subscription of Apple services has been around for a long time -- Goldman Sachs analyst Simona Jankowski noted the idea three years ago. However, it looks like Apple -- in its typical slow and deliberate fashion -- is starting to put the pieces together to make "Apple Prime" a reality.

Bundling could be extremely valuable for the company as it looks to differentiate its services offerings. Apple Music has managed to attract 60 million subscribers on the strength of its integration with Apple's hardware, and management plans to leverage its device users again to attract subscribers to Apple TV+.

But the strength of Apple's hardware and billion-user install base only goes so far. Android is much more popular than iOS outside of the United States. And it's telling that Apple Music subscribers are largely concentrated on iOS.

Offering a bundle that brings together all of the services consumers expect from their smartphones -- music, video, games, reading, and taking and storing photos (with iCloud) -- is a compelling proposition. Furthermore, Apple is incentivized to scale services like Apple TV+ and Apple Arcade, because its content costs are fixed. As such, it can offer significant discounts for bundlers if it's expected to increase total customers and their lifetime value.

All of the ingredients are there for Apple to offer a bundle at an attractive price for consumers.

While Apple could create value from bundling within its services business alone, the real value of an Apple bundle is in attracting new customers to Apple's hardware and creating loyalty among those new users and existing customers. Apple already has high loyalty rates among iPhone users, but there's still a massive market of Android users for it to go after.

Looking to Amazon, the company has already built a customer-loyalty machine with Amazon Prime.

Prime does an exceptional job of incentivizing its members to shop on Amazon and use Amazon products. Fast shipping on any order makes Amazon the first place Prime members look when they want to buy something online. 5% back on Amazon and Whole Foods for Prime members using their Amazon credit card is another reason to choose the retailer over competitors (note: Apple just launched a credit card).

Video and music streaming give members a reason to renew their subscriptions and sign up for one full year at a time instead of paying month to month. Prime members also get a discount on Amazon's Music Unlimited streaming service, yet another reason to stay subscribed long term.

For all of its effort, Amazon -- which already owns a massive share of online retail -- has steadily gained share of the market over the years. The key is, Amazon offers exceptional value to Prime members with the knowledge that its retail operations will subsidize the costs of offering all the services bundled into Prime.

Apple is in a position to do the same: offer a compelling value to customers with the understanding that its high-priced and relatively high-margin hardware sales will subsidize the price of its services bundle. Services is already a high-margin source of revenue for Apple, so there's a lot of room for the company to cut prices to increase loyalty. An "Apple Prime" bundle could help grow Apple's market share just like Amazon Prime has grown Amazon's.