Please ensure Javascript is enabled for purposes of website accessibility
Log In Help Join The Motley Fool
Free Article Join Over 1 Million Premium Members And Get More In-Depth Stock Guidance and Research
By Adam Levine-Weinberg - Oct 19, 2019 at 10:06AM

New CEO Mark Tritton may be able to improve Bed Bath & Beyond's product assortment -- but that probably won't be enough to spur a Target-like rejuvenation for the struggling home-goods chain.

Bed Bath & Beyond (BBBY -15.87%) has struggled mightily in recent years. Earlier this month, the home furnishings retailer reported that comparable-store sales plunged more than 6% year over year for a second straight quarter. Moreover, for the past five months, the company has been trying to stabilize its sales and shore up its profitability without a permanent management team in place.

As a result, investors were very excited when Bed Bath & Beyond revealed last week that it had poached Target's (TGT -1.33%) chief merchandising officer, Mark Tritton, to be its next CEO. In the two trading sessions following this announcement, Bed Bath & Beyond stock soared more than 30%, although it has given back some of those gains since then. 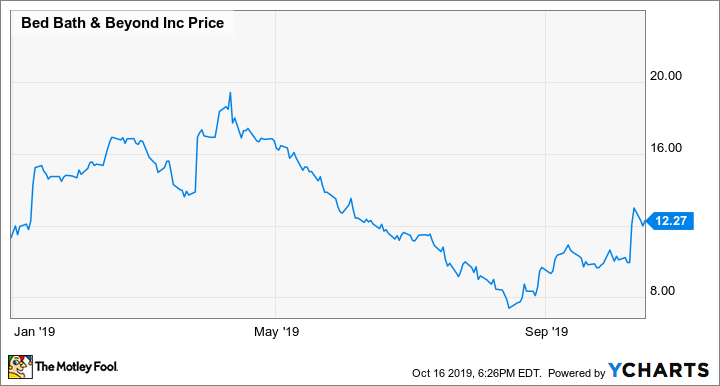 Tritton did a great job at Target, reviving its vaunted private-label business and contributing to the discounter's stellar growth over the past two years. However, fixing Bed Bath & Beyond will be a lot harder, as its problems extend far beyond its merchandise selection.

Former Bed Bath & Beyond CEO Steven Temares led the company for 16 years. During the first decade of his tenure, Bed Bath & Beyond grew rapidly, consolidating a leadership position in the home furnishings business. However, he and his lieutenants failed to recognize the growing threat the company faced from e-commerce and off-price retail and stuck with a business model that was vulnerable to disruption.

As a result, Bed Bath & Beyond's earnings have been in free fall for several years. The retailer earned more than $5 per share in fiscal 2015, but adjusted earnings per share came in at just $2.05 in fiscal 2018. (Fiscal 2019 isn't shaping up to be any better.) This consistently poor performance eventually led to activist investor pressure, culminating in Temares' sudden resignation in May.

Bed Bath & Beyond's lackadaisical response to the changing competitive landscape was just one symptom of a bigger problem: an insular culture. The company's practice of promoting from within has contributed to a lack of big, bold ideas at the retailer. Instead, management has implemented a parade of smaller turnaround measures that have all been too little, too late. This points to the need for an infusion of new talent -- particularly at the top of the leadership ranks. 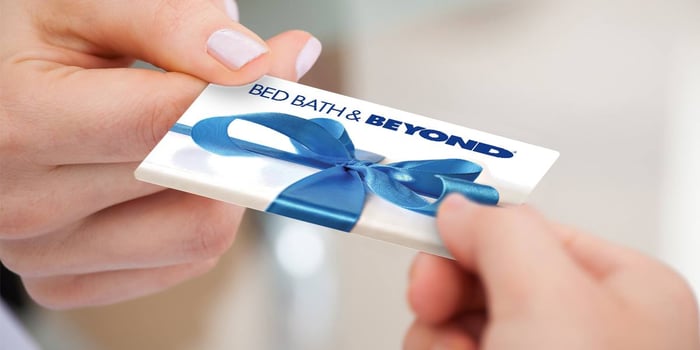 New CEO Mark Tritton is widely expected to freshen Bed Bath & Beyond's merchandise assortment and expand its selection of private-label and exclusive merchandise after he takes the helm next month. That would follow a strategy that has contributed to Target's impressive sales growth over the past two years.

Tritton is an extremely well qualified retail executive and should be able to make big improvements at his new employer. However, he faces a much different kind of challenge at Bed Bath & Beyond than he did at Target.

Getting customers into its stores was never a problem for Target in recent years. The company does a brisk business in groceries, pharmacy items, and other household basics, encouraging frequent visits. That, in turn, gives Target the ability to showcase new private-label and exclusive products to a broad audience of customers who are already in its stores.

By contrast, Bed Bath & Beyond relies much more on infrequent customers. Even if Tritton manages to quickly build up a broad portfolio of private brands offering a great combination of functionality, value, and style, it won't be as easy to get those products in front of customers as it is at Target. Bed Bath & Beyond will probably have to increase its marketing spending significantly to boost awareness of new products it introduces, putting more pressure on its profitability. Even then, it will be swimming against the tide of consumers making fewer shopping trips (particularly for discretionary items).

Even after its recent surge, Bed Bath & Beyond stock trades for just six times earnings. The company also has an opportunity to raise a substantial amount of cash by selling real estate and divesting some of its noncore brands. Thus, the market's expectations for Bed Bath & Beyond remain quite muted. Nevertheless, investors should probably steer clear of the stock until Tritton shows that he will be able to implement a strategy powerful enough to counteract the severe headwinds that Bed Bath & Beyond's business faces.