Please ensure Javascript is enabled for purposes of website accessibility
Log In Help Join The Motley Fool
Free Article Join Over 1 Million Premium Members And Get More In-Depth Stock Guidance and Research
By Kristina Zucchi – Oct 19, 2019 at 8:34AM

The tire giant is cutting costs, enjoying the tailwind of lower oil prices, and preparing to capitalize on its strengths.

Goodyear tires have been a staple on U.S. cars, trucks and other vehicles since its founding in 1898. Today, they're on vehicles in almost every country, making Goodyear Tire and Rubber (GT -1.43%) one of the three largest tire manufacturers worldwide. But weak volumes, commodity costs, and competition have put the brakes on its growth.

Tire sales volumes have fallen industrywide in recent years due to a drop in global auto production. In the U.S., it fell from 12.2 million vehicles in 2016 to just under 11 million last year, and globally, new car production declined by 4% in 2018 alone. But sales of replacement tires -- up 3% this year -- have offset that. Roughly 75%  of Goodyear's European and American sales are replacement tires, which generally have higher margins, which has helped strengthen its profitability. In Asia, the story for the company was different. Its sales in that region, and particularly in China and India, are more evenly split between replacement and new car tires, and both declined in 2018. 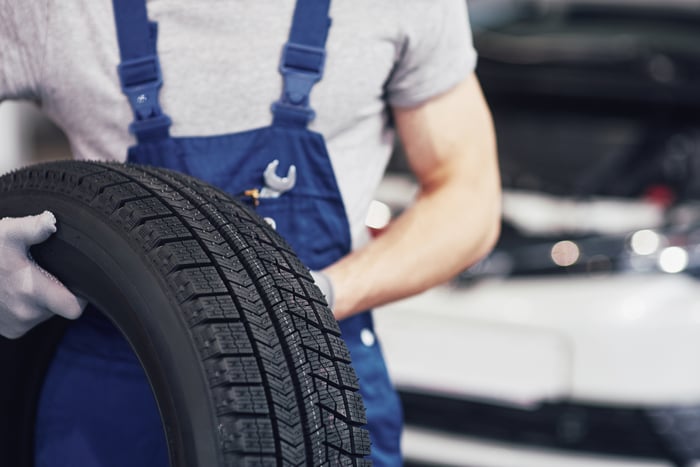 Commodity prices have also been a drag on the industry since 2017. Tires use both natural and synthetic rubber, and the synthetic variety is made from petroleum. So, when oil prices rise, the manufacturing costs of tires do too. Synthetic rubber amounts to about half of the raw materials in Goodyear's tires, but because the price of oil rose to a two-year high last October, it accounted for about two-thirds of the company's 2018 raw material expenses.

But since that peak, the price of oil has largely receded, so the company's 2019 forecast expenses have decreased from $300 million to $275 million. Additionally, it recently announced price hikes of up to 5% for its consumer replacement tires. The combination of lower expenses and higher selling prices should bode well for Goodyear's profit margins, which have declined over the past three years.

Over the last 18 years, Goodyear has lost market share as competition intensified for certain varieties of lower-tier tires. Concurrently, overall demand for them faltered. Last year, industry sales of tires smaller than 17 inches fell 11% in the U.S. and 3% in Europe.

Domestically, budget-brand tires were a large part of its business, but Goodyear consciously decided to move away from these highly competitive, low-margin tires, and toward high performance, 17-inch or larger tires that command higher prices. "There's enough growth at the high end to grow market share...where [the] number of competitors is smaller and opportunity to add value is bigger," said CFO Darren Wells. Since 2017, it has gained market share -- the U.S. large tire market grew 7% in 2018, while Goodyear's sales increased by 12%. It achieved similar market share gains in Europe as well. Over the next few years, the company expects to grow further by building a pipeline of business for these premium products, especially in the electric vehicle market.

The U.S.: The good and the bad

Goodyear appears to be turning the corner on its recent woes thanks to its focus on premium tires and the tailwind of lower oil prices. But the story for the company from here will likely depend on how well it manages in the market where it all began: the U.S.

The Americas accounted for almost 80% of Goodyear's $15.9 billion in new-tire sales last year. Premium, high-performance tires are increasingly in demand domestically, but there are fewer competitors making them, and supply is tighter than in the lower-tier segment. Moreover, rival manufacturers don't appear to be making moves that would allow them to increase production and ease those supply constraints, so the company has been able to boost prices with limited pushback. This strategy seems to be working. In the first six months of 2019, the replacement industry for greater than 17-inch tires grew 6% in the U.S.; Goodyear's sales grew 11%.

Higher labor costs in the U.S., however, are overshadowing that sales growth. The company recently announced a restructuring plan for its U.S. factories, modeled on one it embarked upon in March for two of its five German plants. That reorganization will change the plants' layouts and increase their level of automation, allowing the company to reduce the number of workers it employs. It also plans to shift some production capacity to premium tires. The German restructuring is expected to save Goodyear between $60 million and $70 million annually over the next three years, and management forecasts that the U.S. plan will deliver even larger savings.

Goodyear seems to be moving in the right direction. Its shift toward premium tires and its outlook for lower expenses -- due both to the easing of commodity prices and its efforts to reduce its workforce -- bode well for its ability to increase its market share and boost profits. These alone should lead to higher growth, and if there's a jump in global auto production or in unit sales of replacement tires, that growth could accelerate even more strongly.

Goodyear's financial position strengthened over the last year. Long-term debt at the end of 2018 was unchanged from 2017, but its debt-to-capital and debt-to-equity ratios both fell. At the same time, the company's current liquidity rose, and its return on equity improved. Goodyear's stock is currently trading at a forward price-to-earnings ratio of 6.9, which is lower than its five-year average of 8.7, and cheaper than those of its peers -- Cooper Tire and Rubber (CTB), trading at a forward P/E of 10.1, and Bridgestone (BRDCY -1.69%) which has a trailing P/E of 10.7. Goodyear has a higher dividend yield than its competitors, 4.7%, versus 1.5% for Cooper and 3.8% for Bridgestone. And given its book value per share of $20.84, Goodyear stock appears undervalued in its recent trading range between $14 and $16.

Why Goodyear Tire, American Axle, and Tenneco Popped Over 14% on Tuesday

Have $1,000 to Invest? Billionaires Are Buying These 3 Stocks

Why Goodyear Continues to Skid