iPhone 11 sales are off to a "very strong start," according to Tim Cook, CEO of Apple (NASDAQ:AAPL). In an interview at the end of last month, Cook told the German daily Bild that he "could not be happier" with the launch of the new iPhones.

Cook's comments were followed by a report from the Nikkei Asian Review that said the tech company is increasing its orders with suppliers by about 10%. That report was followed by a note from analyst Ming-Chi Kuo, who says Apple is planning to launch a follow-up to 2016's iPhone SE in the first quarter of 2020. He said the new device will be a "key growth driver."

After years of speculation that the company is poised for another supercycle for iPhones following the boom from the release of the iPhone 6, things are shaping up for record sales. And the timing couldn't be better for Apple. 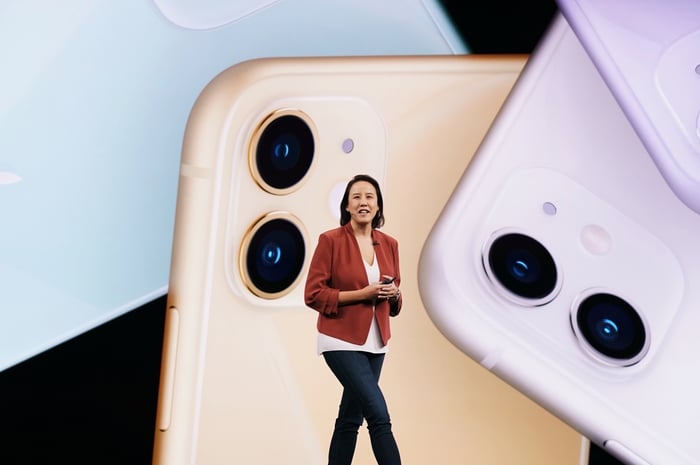 There are two main factors that may be leading to higher-than-expected iPhone sales: lower prices and an aging install base.

One of the more notable announcements at Apple's iPhone event last month was that it had reduced the price on the flagship iPhone 11 compared with its predecessor, the iPhone XR. The iPhone 11 starts at just $699 versus the XR's $749 starting price last year.

Not only did Apple drop the price on its new devices, but its older devices got a price cut as well. The XR now starts at $599 and the old iPhone 8 is just $449. The launch of the iPhone SE2, as Kuo is calling it, at $399 could lead to even more unit sales. It will feature the same processor as the iPhone 11, but the external components of the iPhone 8.

Investors may worry that Apple will see pressure on its iPhone revenue or profit margin as it ramps up unit sales at lower average selling prices. It'll be a line item worth paying attention to when the company reports its quarterly results, although the real impact won't show up until next January after a full quarter of sales.

The second factor is that it's now been five years since the release of the iPhone 6. Apple sold 231 million iPhones in the fiscal year following the launch of that device, a record for the company. It sold another 212 million the following year with the iPhone 6s. There are a lot of old iPhones still in use, and those iPhone 6 devices still in use aren't compatible with the latest version of iOS. The iPhone SE2, which features the same form factor as the iPhone 6 and iPhone 6s, may be instrumental in getting those users to upgrade their devices.

The larger benefit for Apple

The bigger picture for Apple is that strong iPhone sales give it a greater opportunity to sell its subscription services. It is launching several important new services this year, including Apple TV+, Apple TV Channels, and Apple Arcade. Those -- along with Apple Music -- could play a key role in propelling its services revenue to $50 billion by next year.

Each new iPhone purchase comes with a free year of Apple TV+. The company hopes to persuade a large portion of those customers to stay subscribed at about $5 per month after that free year ends, creating a massive paid subscriber base in short order. But Apple TV+ is also a mechanism to get people to check out Apple TV Channels, its subscription streaming service aggregator. Channels presents an opportunity for Apple to exercise greater control over its revenue and profits from subscriptions, compared with the App Store.

Apple Arcade is perhaps the biggest opportunity to turn casual App Store gamers into a recurring stream of high-margin revenue. Games is the biggest source of revenue for the App Store, and Apple Arcade is an opportunity for the company to own the category. It pays a fixed price for the games available in Apple Arcade, so scaling the service will allow it to generate a lot more revenue than App Store downloads and in-game purchases at an excellent profit margin.

While increased iPhone unit sales could lead to greater revenue growth from the hardware unit itself, the services business is likely to benefit much more. A larger install base of devices with up-to-date specs including bigger screens, faster processors, and longer battery lives -- all of which make its new subscription services more appealing -- should get Apple to its services revenue goal.

Editor's note: This article originally misstated the iPhone 6s' compatibility with the latest version of iOS. It's fully compatible.