The high-yielding MLP is finally pressing the pause button after running out of fuel.

As they say, all good things must come to an end. Sadly, that's the case for Holly Energy Partners' (HEP -1.80%) distribution growth streak. The MLP had increased its payout every quarter since its IPO in 2004, notching its 599th straight raise in July. However, it recently put an end to that streak by pressing pause on dividend growth through at least next year.

That decision will help ease some of the pressure on the company's financial profile, which has weighed on its valuation in the last year, causing its yield to spike above 12%. While the company plans to keep paying at the current level through 2020, it has a lot of work to do before it can restart its distribution growth engine. 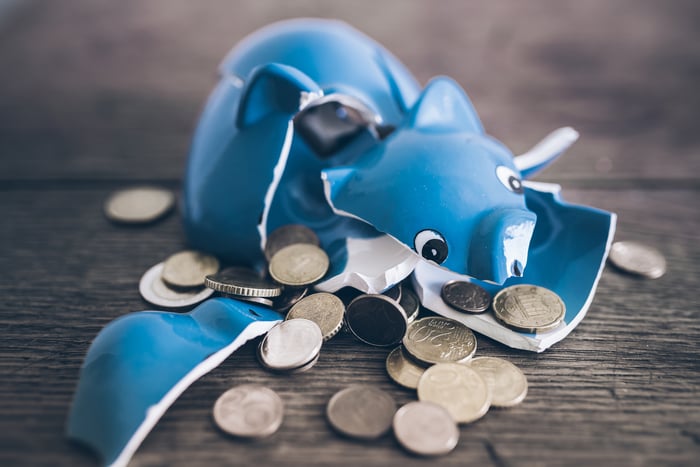 Holly Energy Partners' decision to hold its distribution flat for the balance of 2019, as well as the next year, is the result of several factors. For starters, the company is already paying out virtually all its cash flow to investors, only covering its payout by a razor-thin margin of 1.01 times through the first half of the year. That's well below the comfort zone of most MLPs, which like to see distribution coverage above 1.2 times.

The company's cash flow, meanwhile, will take a hit after refiner Delek opted not to renew some of its contracts. On top of that, it expects to have elevated maintenance expenses in the near term due to some one-time events.

The company, however, will benefit from higher rates on existing contracts next year, which will help offset some of its cash flow headwinds. Meanwhile, it recently teamed up with Plains All American Pipeline (PAA -1.61%) on a new pipeline and storage terminal joint venture (JV) in Oklahoma.

The partners will invest $130 million into the JV, which includes the contribution of an existing storage terminal by Plains All American, valued at $40 million. The cash flow from this partnership -- which will get a boost when more storage capacity comes online in the second quarter of next year -- will also help offset its headwinds. Because of that, Holly Energy Partners estimates that it can generate just enough cash to cover its current distribution level next year.

With Holly Energy Partners paying out all its cash flow, it's not retaining any money to reinvest in expanding its business. Meanwhile, the company's debt-to-EBITDA (earnings before interest, taxes, depreciation, and amortization) ratio stood at four times at the end of the second quarter, which is right at the comfort level of most MLPs. Because of that, it doesn't have a lot of financial flexibility to invest in expansion projects. In the company's view, it had about $460 million available that it could invest in expansion projects or acquisitions.

Because of that tight financial profile, the company has had to be creative to drive growth. One way it's doing that is through the JV with Plains All American. It only needs to invest about $65 million into the partnership. In exchange, its earnings will get an immediate boost from the terminal Plains All American contributed.

Meanwhile, it will get another one next year when more storage capacity comes online and a third bump when their new pipeline starts up in the first quarter of 2021. While its investment in this partnership will use up some of its liquidity, Holly Energy still has enough left to make additional investments if the right deals come along.

Meanwhile, another way the company can boost its bottom line is by finding new alternative uses for the assets that Delek didn't renew. The company's management team is "optimistic" they can do this, which would further lessen the blow of the non-renewal.

Stable for now, but no sure thing

Holly Energy Partners ran out of fuel, which forced it to halt its distribution growth streak at 59. On a positive note, the company plans to maintain its current high-yielding payout through next year.

However, it's unclear how long it can keep that up given its tight financial profile, which severely impacts its ability to grow. Because of that, it's not a great option for income seekers right now.