Please ensure Javascript is enabled for purposes of website accessibility
Log In Help Join The Motley Fool
Free Article Join Over 1 Million Premium Members And Get More In-Depth Stock Guidance and Research
By Lee Samaha - Updated Oct 21, 2019 at 8:06AM

It's set to be anther eventful quarter, and investors have reason for optimism.

It's been a while since investors in General Electric (GE -1.42%) could argue that their company has the potential to report one of the better sets of numbers in the industrial sector in the upcoming earnings season, but that's pretty much the case right now. That said, it's the underlying development of the business that really matters. So let's look at what to watch for from the three key segments and the guidance in the third quarter when GE gives earnings on the 30th Oct.

GE has cause to be positive going into its results because, unlike much of the industrial sector, its businesses tend to be long cycle rather than short cycle. This means that GE's aircraft engines, gas turbines, and wind power solutions tend to have long sales cycles, making them less susceptible to a sudden slowdown in the economy in the way that short-cycle businesses like welding equipment or industrial supplies are. 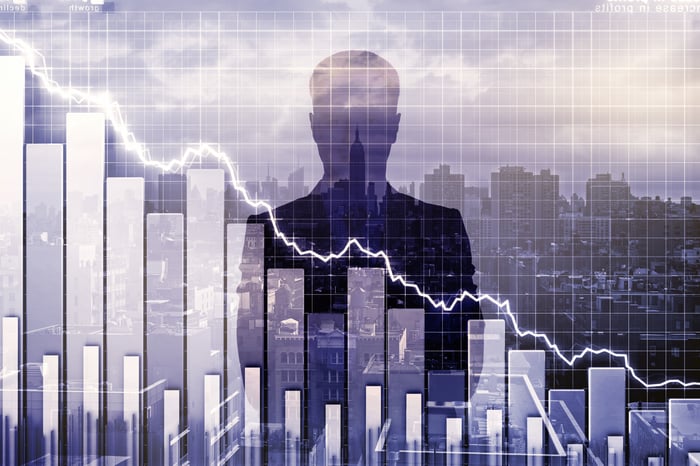 The second reason is that CEO Larry Culp has, arguably, been conservative with guidance and given the company some room to maneuver. As a reminder, Culp raised the company's revenue, earnings, and industrial free cash flow (FCF) guidance on the last earnings call.

As you can see below, GE did reduce its estimate for the cash it would need for restructuring by $500 million, but that didn't account for all of the $1 billion improvement in the FCF guidance -- the other $500 million was largely due to improvements at the power segment.

This has definitely been the problem area in recent years, but Culp recently told investors that the heavy-duty gas turbine end market would be "somewhat north" of his company's prior expectations. If there's one thing that former CEOs Jeff Immelt and John Flannery were guilty of, it's being overly optimistic on assumptions over gas turbine demand, and structuring the business for significantly more demand than actually occurred.

Clearly, Culp isn't about to repeat that mistake anytime soon, and the brighter end-market outlook could feed through into better margin performance and a further cut in the allocation for restructuring expenses -- which would be good news for FCF.

Investors should look out for that, and for any color on the key part of its power operations that management is trying to improve. As you can see below, the blue-chip stock  is pinning its hopes on a revenue and margin improvement in its transactional services revenue -- an area that management feels it had previously neglected in favor of chasing long-term contractual service agreements. An example of a successful transactional deal comes from the four-year deal to service Petrobras owned power plants in Brazil signed in 2017.

Given the slightly better end-market outlook, and continued improvement in use of gas as a source of electricity generation, it's reasonable to expect some improvement in its transactional services performance.

The commercial aviation aftermarket has been very strong so far in 2019, but GE's commercial spares rate looked a little weak in the second quarter. The figure is a daily sales rate, so it may have had something to do with how the days fell in the particular quarter. Nevertheless, investors will want to see an improvement here -- not least to dispel any fears that slowing economic growth is feeding through into less passenger traffic and ultimately aircraft servicing. 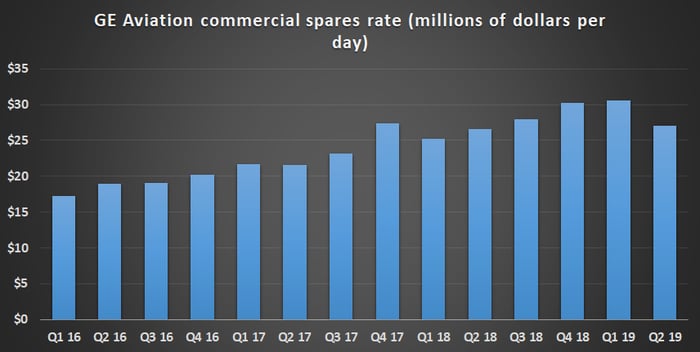 The second imponderable is whether Boeing will get the 737 MAX back into service in timely fashion. This is a big issue for GE as its joint venture with Safran, CFM International, makes the LEAP engine for the aircraft. As such, GE's FCF will take a hit if it's not delivering LEAP engines as planned.

It's not a major issue -- the cash will come in, provided the engines are delivered in the future -- but GE could end up reducing its FCF guidance for 2019 if the 737 MAX doesn't get back into service.

Finally, keep an eye on GE Healthcare orders. Management's guidance is for low- to mid-single-digit revenue growth in 2020 -- excluding the biopharma business, which will be sold to Danaher. And investors will be hoping GE keeps up the pace of orders. As you can see below, the first quarter received a boost from new products launched in imaging, ultrasound, and life-care solutions. But before that, order growth was a bit patchy. 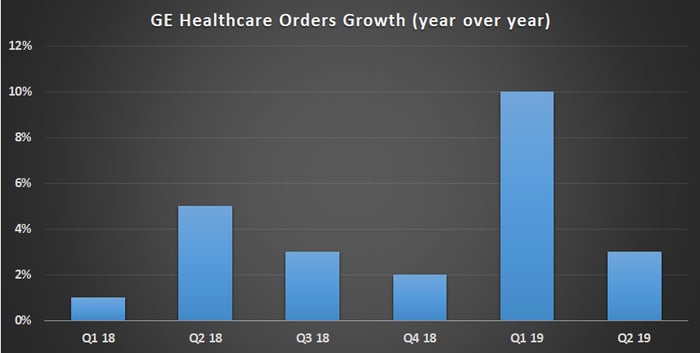 All told, GE's earnings report is likely to be as eventful as it usually is. On the downside there are still issues over its long-term-care obligations at GE Capital, while the 737 MAX is an ongoing source of concern.

On a more positive note, there's potential for improvement at power, and since there's no tangible sign that the commercial aviation market is slowing down as yet, GE investors have some reason for optimism over GE Aviation too.