Please ensure Javascript is enabled for purposes of website accessibility
Log In Help Join The Motley Fool
Free Article Join Over 1 Million Premium Members And Get More In-Depth Stock Guidance and Research
By Lee Samaha – Oct 20, 2019 at 10:21AM

Reviewing CSX's earnings and what they mean to the rest of the railroad industry.

CSX's (CSX -3.12%) latest earnings turned out to be not quite as bad as expected, and the railroad's highly successful attempts at cutting costs suggest its peers can do the same in the future. There's little CSX can do about a deteriorating economy -- something also confirmed in the earnings report -- but management's full-year outlook remained unchanged from what it was three months ago, and internal execution has been good. It was a relatively good earnings report, but is it enough to make the stock a buy, and what does it mean for the other stocks in the railroad industry?

CSX earnings better than many feared

CSX started 2019 expecting its full-year revenue growth to be 1% to 2%, but the deterioration in the industrial economy led management to cut expectations to a decline of between 2% and 1%. Indeed, the third-quarter earnings suggested CSX will have difficulty hitting the high end of the reduced guidance -- revenue declined 5% in the quarter and is now down 1% in the first nine months of 2019. That said, the fact that CSX didn't reduce full-year guidance can be taken as a positive in the current environment. 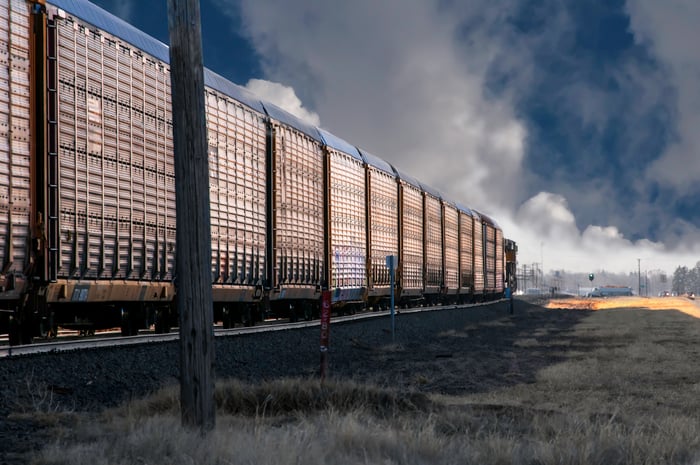 Digging into the details, the weakness in the economy is hurting CSX's top-line but the railroad managed to keep operating income flat year over year at $1.29 billion in the quarter and on a nine-month basis operating income is up 5% to $3.81 billion. How?

In a nutshell, CSX has managed to cut its expenses enough (down 8% in the quarter and 4% in the first nine months year over year) to offset the impact of revenue declines and, in doing so, boost its profitability. For its own reasons the railroad industry measures profitability in terms of operating ratio, or OR (expenses divided by revenue), whereby a lower number is better -- anyone investing in the railroad industry will be familiar with the terminology.

In fact, CSX's OR reduction to 56.8% from 58.7% in the same quarter a year ago is a startling performance from a railroad that already has one of the lowest ORs in the industry thanks to its adoption of so-called "precision scheduled railroading," or PSR, management methodology -- a set of principles intended to reduce asset capacity and improve efficiency by running trains between two fixed points on a network at fixed times rather than using a hub-and-spoke model. 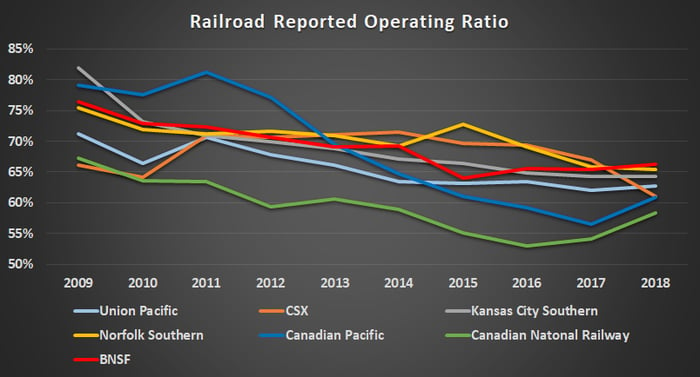 The PSR improvements keep coming, with CFO Kevin Boone noting that overtime was reduced by 14% on a sequential basis, and the active locomotive count was down 11% year over year with "an 8% year-over-year reduction in our mechanical workforce." Simply put, CSX is becoming more efficient.

Moreover, CEO James Foote maintained expectations for a sub-60% OR for the full year. That would mark an impressive performance for three key reasons:

Of course the immediate question analysts had on the earnings call was, What kind of OR can investors expect from CSX in the near future, particularly as revenue could come under pressure in 2020? Indeed, Foote and his team spent much of the earnings call answering a variant of that question, but diligently declined to give any specific guidance for next year. Frankly, that's fair enough given the uncertainty in the economy right now.

On a brighter note, a longer-term perspective shows that CSX's OR performance (in declining revenue) suggests that the OR could decline even more in a revenue growth environment, so if you are pricing in a stock over the long term you must upgrade profit expectations accordingly -- a key facet of looking for stocks to buy in the railroad industry.

All told, the earnings report was good news for CSX, but the lack of color in the near-term OR outlook and the pressure on full-year guidance suggest some near-term disappointment ahead, even if long-term prospects look a little brighter. Now might be the best time to buy into CSX.

However, the key takeaway from the earnings report might not be about CSX at all. Instead, investors might conclude that CSX's performance with PSR might raise the target for OR performance from later adopters of PSR like Union Pacific, Norfolk Southern,and Kansas City Southern -- something to think about at those companies give earnings.