Enbridge (NYSE:ENB) already offers investors a well-above-average dividend. At its current yield of 6.1%, it's nearly triple the level of the average stock in the S&P 500. However, as good as that payout might already be, it's about to get even better. That's because the Canadian pipeline company will probably increase it by another 10% before the year is out.

That impending increase, plus the potential for more growth in the coming years, makes it an excellent stock for dividend investors to buy for the long term. 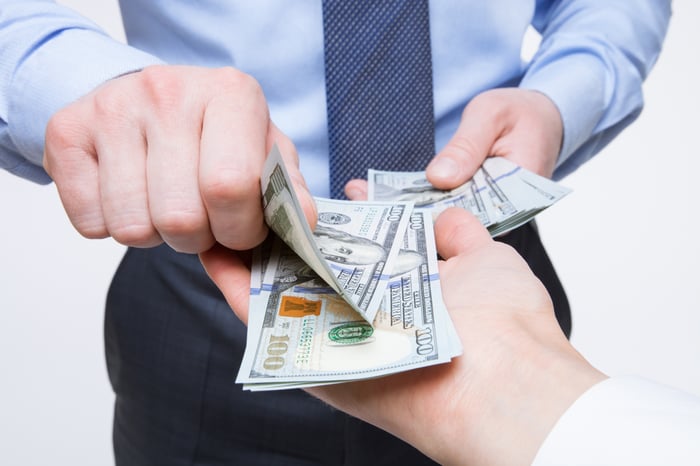 Last December, Enbridge reaffirmed its three-year strategic and financial outlook. That plan has the company on track to grow its cash flow at a 10% compound annual rate from 2018 through 2020. That supports its plan to increase its dividend by 10% per year during that timeframe. It has already announced two such increases, including a 10% raise last December.

Meanwhile, Enbridge expects to complete CA$9 billion ($6.9 billion) of expansion projects by the end of this year, and it anticipates starting up several more next year. It remains on track to produce around CA$5.00 per share ($3.81) of cash flow in 2020. That supports its ability to give investors another 10% raise, which given the company's history, should come sometime in December.

Plenty more fuel where that came from

That dividend increase likely won't be the last one Enbridge's investors receive. Even with the company's payout likely to rise from CA$2.95 per share ($2.25) to CA$3.25 per share ($2.48) this December, it will consume only about 65% of its cash flow. That's right in line with its target level. So the company should be able to continue increasing its payout by around the same rate as its cash flow grows in the future.

In Enbridge's view, it has enough internal financial flexibility to fund between CA$5 billion and CA$6 billion ($3.8 billion-$4.6 billion) of expansion-related spending per year after 2020. That investment rate should be enough to support 5% to 7% annual growth in the company's cash flow, suggesting it could increase its dividend at a similar pace.

Enbridge already has secured several longer-term expansion projects that are on track to come online after next year. Among the largest are two large oil pipeline expansions that it expects to finish in 2021 and an offshore wind project in France that should start up in 2022. Meanwhile, it has several other large projects in development. One is a partnership to build the Rio Bravo Pipeline, which will support an LNG export facility in Texas. That project could come online in 2023, coinciding with the anticipated in-service date of the LNG project. Meanwhile, the company has three more offshore wind projects in Europe under development, which it could start bringing online by 2023. With the increasing visibility of Enbridge's long-term growth prospects, the company appears as if it will have plenty of fuel to continue growing its dividend in the coming years.

A top-notch dividend stock for the long term

Given Enbridge's outlook and history, it looks like a sure bet that the company will boost its dividend by another 10% before the end of this year. It implies that investors who buy at the current price will be locking in a 6.7%-yielding payout. That probably won't be the last one, since the company has plenty of fuel to continue growing it for the next several years. That makes Enbridge an excellent dividend stock to consider buying and holding for the long haul.