Please ensure Javascript is enabled for purposes of website accessibility
Log In Help Join The Motley Fool
Free Article Join Over 1 Million Premium Members And Get More In-Depth Stock Guidance and Research
By Jeremy Bowman - Oct 22, 2019 at 8:14AM

Apple (AAPL 4.08%) has been a blowout winner in the stock market this year.

Shares of the iPhone maker are up 52% year to date. That's a good bounce back from the broad-market sell-off at the end of last year, and they gained even more on recent optimism about the iPhone 11. In between, the stock got a boost from a series of better-than-expected earnings reports.

Heading into Apple's fourth-quarter earnings report, investors are anxious to see early signs of how iPhone 11 sales have gone, which will be more fully revealed in the company's first-quarter guidance, traditionally its biggest quarter.

Beyond the usual figures investors focus on, including iPhone sales, services revenue, and earnings per share, there's another metric investors should watch. 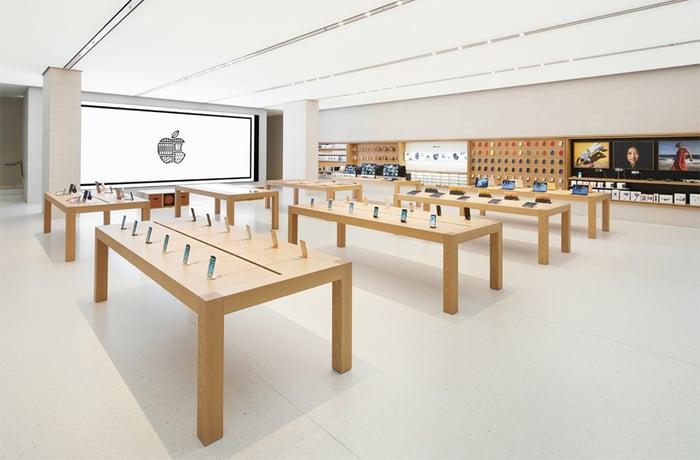 Apple generates more cash than any other American company. In fiscal 2018, the tech giant made $60 billion in profits, and though that number will be slightly lower in fiscal 2019, Apple still had $235 billion in cash and investments on its balance sheet as of June 29, the end of the third quarter. In other words, Apple has more money than it knows what to do with.

For the past several years, during most of CEO Tim Cook's tenure, Apple has mainly chosen to spend those profits on buying back stock. Apple has even taken on more than $100 billion in debt to fund those repurchases, and it has spent more than $200 billion on share buybacks since 2013, when the program started in earnest. Those buybacks have reduced Apple's share count by about 20% over the past five years. 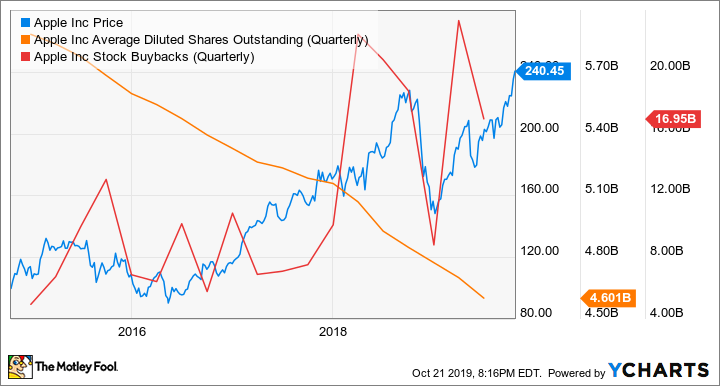 In contrast, Apple has spent only a fraction of that amount on dividends.

That strategy is about to face its biggest test yet, since a climbing share price combined with falling profits have led to a P/E ratio that's stretching to the highest it's ever been under Cook. It now sits at 20.4, just under the market average. At that price, it's hard to call Apple a value stock, as investors have generally considered it to be in recent years.

The big question for Apple management in this earnings report and the upcoming quarters, then, is whether it will continue to plow about $75 billion a year into share buybacks even when its stock no longer seems cheap.

Apple is limited in what it can do with its tens of billions in profits. Like most other companies, it can return that cash to shareholders through repurchases or dividends, or it can spend it on an acquisition or a capital project, like a new campus.

Throughout its history, the company has generally been stingy with acquisitions, and the company outsources nearly all of its manufacturing, so a massive investment in a new plant is unlikely. Therefore, the choice comes down to repurchases or dividends. But Apple shareholders, especially retirees and other dividend investors, have to be concerned that Apple's capital returns have been so heavily weighted toward buybacks.

Today, Apple pays a paltry 1.3% dividend yield, and its dividend increases have historically been modest, considering the profits the company spins off as well as its cash reserves. If the iPhone maker had spent all of the money it's returned to shareholders so far this year on dividends instead of allocating nearly 80% of it to buybacks, the company would be paying a dividend yield near 8%.

That kind of quarterly payout would almost definitely lift the share price and instantly make the stock much more desirable to own. Even splitting the difference between buybacks and dividends would give investors a 4% yield, and it would also be likely to boost the share price. Apple's current pace of capital returns isn't sustainable based on its current profits, but the company could easily support a 4% yield if it cooled off on buybacks.

Whether share buybacks are a smart strategy depends on the circumstance, but unless a company is taking advantage of a discounted share price, shareholders almost always prefer a dividend over buybacks. Dividends put cash directly into shareholder pockets and give them the opportunity to reinvest that cash in the company, if they believe it still offers good value. Dividends, in other words, give individual shareholders a say in way that buybacks don't.

With the stock price reaching an all-time high and Apple's valuation looking stretched for a company whose profits are still declining, it's time for management to hit the brakes on share buybacks and consider raising the dividend. The Mac maker isn't due to announce another dividend increase until next spring, but a moderation in repurchases now would be a promising sign that management isn't drunk on cash flow and a falling share count. Tim Cook and company should be paying attention to the stock price, after all, and shareholders would be justified to demand a greater cut of the company's bountiful profits.