The stock's gain follows Apple's fiscal first-quarter earnings release. While the company's earnings per share and revenue for the quarter beat consensus analyst estimates, the main reason for the Street's bullishness toward the stock on Wednesday is likely news from the company's services segment. Apple revealed the segment's gross margin for the first time -- and it's impressive. 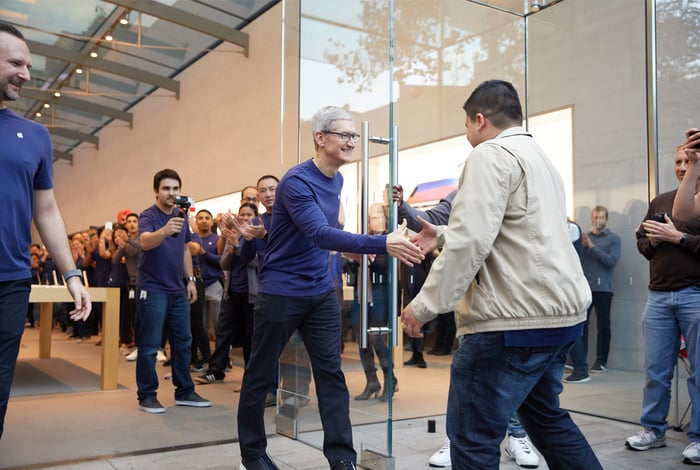 For its fiscal first quarter of 2019, Apple reported revenue of $84.3 billion, slightly ahead of a consensus analyst estimate for revenue of $84 billion but down from revenue of $88.3 billion in the year-ago quarter. Notably, however, Apple had already told investors in a Jan. 2 letter to shareholders that its revenue for the period would be close to $84 billion. Earnings per share for the period were a record high, at $4.18. This was ahead of a consensus analyst forecast for $4.17.

Apple expects its year-over-year decline in revenue to persist in its fiscal second quarter, as the iPhone segment is expected to continue weighing on the company's overall performance. Management guided for revenue during the period to be between $55 billion and $59 billion. This compares to revenue of $61.1 billion in the company's second quarter of fiscal 2018.