The iPhone maker's holiday-quarter revenue will fall short of its outlook.

Apple (AAPL -1.80%) shares were halted abruptly in extended hours today pending news. Shortly after, the company released a letter from CEO Tim Cook warning investors that revenue in the fiscal first quarter is going to end up dramatically lower than it previously expected. That guidance, which had already disappointed investors, had called for revenue of $89 billion to $93 billion in the December quarter. The iPhone maker now only expects to bring in $84 billion in revenue for the quarter. Most other items in Apple's forecast are largely unchanged.

Here's why Apple will fall short in the current quarter. 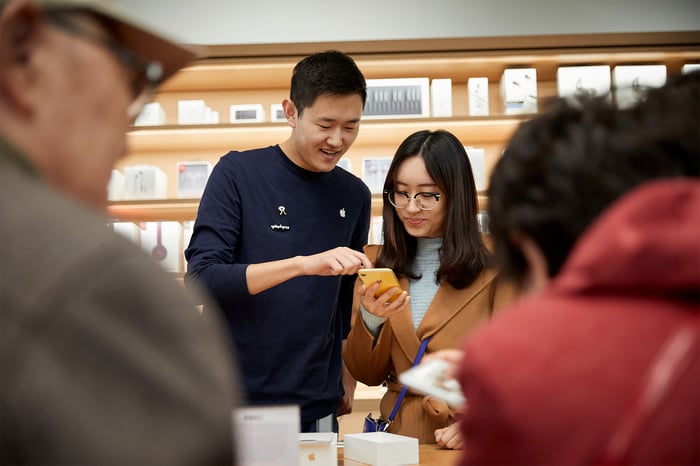 While Apple had warned that it wasn't performing very well in emerging markets, economic conditions in several key markets -- most importantly China -- have weighed considerably. "While we anticipated some challenges in key emerging markets, we did not foresee the magnitude of the economic deceleration, particularly in Greater China," Cook wrote.

Cook directly attributed most of the shortfall to China, pointing to China's sluggish GDP growth in the third quarter, which was the second lowest in a quarter century. President Trump's trade war with the Middle Kingdom is only making matters worse, whipsawing financial markets and adding even more uncertainty that is rattling consumers. Traffic to Apple Stores has declined and China's smartphone market (the largest in the world) is contracting.

Slow sales of iPhones in China "accounts for all of our revenue shortfall to our guidance." While other segments are still performing well, the iPhone has long represented a disproportionate share of revenue.

Beyond China, Apple concedes that "iPhone upgrades also were not as strong as we thought they would be" in developed markets. There have been plenty of reports documenting weak demand for the iPhone XR, and Apple has been aggressively ramping up promotional activity in response.

Apple also strangely says that consumers are still "adapting to a world with fewer carrier subsidies," even as the industry started shifting away from the subsidy model many years ago. Implicitly, that also suggests that iPhone price increases have expectedly hurt demand, while lofty prices ironically exacerbate the problem of slowing upgrade cycles.

On top of all of that, Apple has been forced to raise prices even higher in some international markets due to the U.S. dollar strengthening against local currencies. A lot of customers also took advantage of a battery replacement program that the company introduced last year in the face of backlash around performance throttling, offering battery replacements for just $29 that effectively extended the useful life of those devices, also hurting upgrade activity.

A little bit of good news

In an effort to soften the blow, Cook pointed to a few bright spots. All other businesses combined grew 19%, and the company has grown its global installed base by over 100 million over the past year. Services hit a new record of $10.8 billion in revenue, and wearables grew by nearly 50%. The company also expects to report a new all-time record for earnings per share, which is undoubtedly thanks to massive share repurchases.

Cook says the company is working hard to "improve our results" with a number of initiatives, like making the upgrade process more streamlined. Still, those are minor consolations to investors, whose fears about weak iPhone demand have just been confirmed.