Please ensure Javascript is enabled for purposes of website accessibility
Log In Help Join The Motley Fool
Free Article Join Over 1 Million Premium Members And Get More In-Depth Stock Guidance and Research
By Rich Duprey - Oct 22, 2019 at 7:40AM

These huge brands must fill the void left by the Wrangler spin off.

When VF Corporation (VFC -0.11%) reports fiscal 2020 second-quarter earnings on Friday, Oct. 25, it will be the first full quarter of operations since the spin off of Wrangler and Lee jeans into Kontoor Brands (KTB 1.18%). Investors will get to see just how VF's own stable of well-known brands, including The North Face, Timberland, and Vans, is able to run on its own.

If the first quarter was any indication, even though the denim component was still included in part of that period, VF should keep growing. So let's dive in and see what investors can expect. 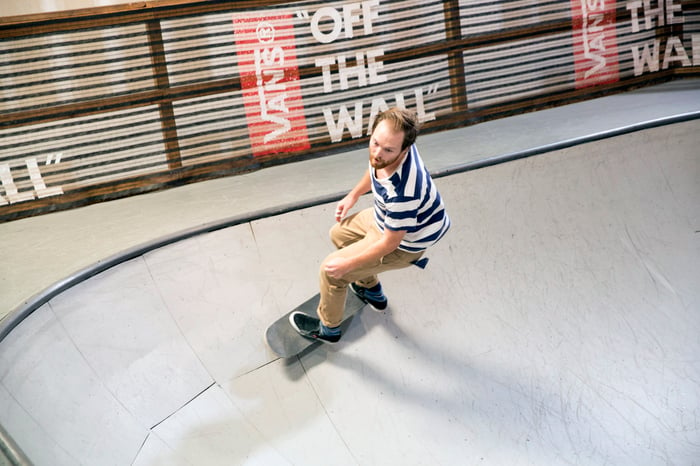 Starting from a firm base

Kontoor contributed around 16% of VF's total revenue in the year-ago quarter, or around $632 million, so that will be a good chunk of change missing this year, but both Vans and The North Face seem up to the task of quickly filling the void.

In the first quarter, Vans revenue surged 23% in currency-adjusted sales, while The North Face was up 12%, lifting VF consolidated revenue 11% for the period. The strong performance allowed the apparel maker to raise full-year guidance for active segment sales a full percentage point to the range of 10% to 11%, and the work segment is still expected to grow 4% to 6% (both ranges on a currency-neutral basis).

In particular, Vans' full-year growth outlook was also raised to between 11% and 13%, while The North Face also saw a boost to between 8% and 9% growth. VF is finding both brands are hitting their stride across all channels, domestic and international, online and offline.

Part of the gains VF achieved were the result of where it was selling the brands. It has de-emphasized channels that are under pressure in the retail market, such as department stores and mid-tier retailers, and focused instead on specialty outlets, direct-to-consumer (DTC), and digital.

The changes have paid off: DTC revenue rose 16% in the first quarter, while it jumped 29% for digital. Moreover, while much of the retail industry remains soft, the outlets that the company is targeting are healthy and remain strong.

And speaking of outlets, off-price stores are not viewed as a growth driver for VF but rather as a place it can unload excess inventory. With its retail partners managing their inventory more closely and timing purchases closer to demand, that's not going to be much of a concern. But the discounted channel does serve as a drag, offsetting DTC and digital.

Some of the biggest potential for VF lies in foreign markets, which grew 10% in the first quarter, led by a nearly 30% increase in China and 19% growth in the broader Asia-Pacific market. China holds great opportunity for the company, as this past summer, the apparel maker partnered with Alibaba's Tmall Innovation Center (TMIC) to design products specifically for the local customer.

Although VF already had a partnership with TMIC for brands such as Dickies and Kipling, now it's adding more of its brands to the list. In exchange for giving Alibaba the right to sell the new merchandise exclusively for a period of time, VF will gain insights into the Chinese e-commerce platform's 650 million customers.

The payoff to come

Last month, VF laid out its strategic vision through 2024 and said it expects to generate free cash flow of $8 billion over the next five years while returning $10 billion to shareholders through dividends and share buybacks. VF's current quarterly dividend of $0.43 per share yields 1.9%.

Analysts forecast VF will generate $3.42 billion in second-quarter revenue, down 12% year over year, but that's due to the Kontoor spin off. Earnings are also expected to fall 9% to $1.30 per share. Until VF laps the spin off, results will appear down, but VF is actually on a strong upward trajectory.

Vans has become the second most popular brand for teens behind Nike, so VF should have done well with the back-to school season, and The North Face should also rise as cooler weather sets in. The second quarter should see the investments VF Corp. has made in its brands continue to pay off.