Walt Disney (NYSE:DIS) may have found a ceiling for theme park prices at its domestic parks.

Overall theme park revenue climbed by 7% to $6.6 billion in the third quarter, while operating income rose by 4% to $1.7 billion. Attendance was down, but the entertainment giant got the people who did come to spend more money -- and it explained how in its Q3 earnings release.

"The decrease in volume was due to lower attendance, partially offset by higher occupied room nights. Guest spending growth was primarily due to higher average ticket prices and increased food, beverage, and merchandise spending," the company reported.

Disney has been steadily raising ticket prices, and it may have finally figured out the point where enough people will come but demand won't make visiting unpleasant due to overcrowding. In addition, by keeping its theme parks busy but not incredibly packed, it may also increase demand for its seasonal after-hours upcharge events like Mickey's Not So Scary Halloween Party (MNSSHP). 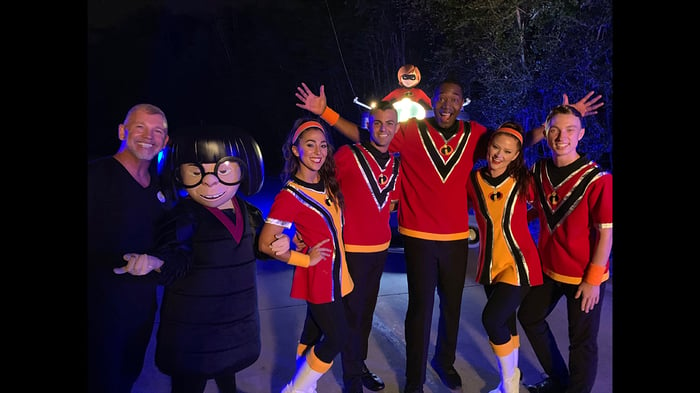 MNSSHP is the only time adults are allowed to wear costumes at the Magic Kingdom. Image source: Walt Disney.

We're having a party?

MNSSHP, which takes place at Florida's Disney World, is one of a variety of separate-admission special events the company offers at its various theme parks. The trappings and offers vary, but all of these extra-charge events have a few things in common and allow a limited number of paying guests access to a park after it closes to daily visitors.

For MNSSHP, visitors pay $105 (annual pass holders get a deal) to enter the Magic Kingdom at 6 p.m. when it closes to regular ticket holders. Event attendees get a bracelet that lets them get on rides, visit trick-or-treat stations, and take part in other festivities.

People with regular tickets aren't kicked out, but they can't go on any rides, so most filter out as the doors for MNSSHP open. The actual event (including free candy and dance parties) runs from 7 p.m. until midnight. People are paying to access a somewhat less-crowded park (wait times for rides are roughly half what they are during a normal day and less during the parade), and get a few Halloween special treats like live actors in the Pirates of the Caribbean ride.

MNSSHP allows Disney to eek a few more dollars out of people visiting its Florida parks on vacation, and it gets annual pass holders -- people who don't need to pay to get in beyond the cost of their pass -- to spend more. It's a very smart way to increase revenue with limited added costs.

Disney does have to pay a little extra in salary to remain open two more hours, but that's minor compared to the revenue it's taking in. And the company does not disclose this, but signage promoting the candy brands being handed out suggests the candy makers are paying to be included (though it's possible they are just providing product).

It's exclusive but accessible

Aside from days when bad weather keeps people away, Walt Disney World no longer has an off-season. As a Florida resident and a pass holder with a modest second home near the park -- and a teenage son -- I have visited during pretty much every month of the year, and I can tell you that the parks generally range from crowded to very crowded. It's apparently always school vacation somewhere, as a random weekday in October still finds each of the four Florida theme parks teeming with school-age kids, and popular rides more or less always have at least a 20- to 30-minute wait.

None of that matters much to me as a local pass holder who visits often, but it can impact the vacation for someone who has limited opportunity to visit. For that person, or more likely that family, MNSSHP offers a chance to pay extra money to get a chance to do more during the event's six-hour window.

In many cases, people will pay for a four- or five-day ticket and add MNSSHP (or one of the other similar seasonal parties offered at other times of the year). This feels like a value for the consumer, since he or she gets access to a less crowded Magic Kingdom, and in a sense buys VIP treatment.

The reality is that this is Disney getting extra money from a customer who has already paid. That's a smart play for the theme park company, which has faced a backlash over price increases that may have contributed to dipping attendance. This is a sort of backdoor price increase, one where Disney gets more money and the consumer thanks the company for it.