Hasbro missed top- and bottom-line estimates, but some of the challenges were out of management's hands.

Shares of Hasbro, Inc. ( HAS 0.25% ), a worldwide entertainment company producing toys and games, among other products, traded as much as 17.7% lower early Tuesday after the company released disappointing third-quarter results. But part of the problem may be out of the company's hands.

Revenues moved slightly higher, compared to the prior year's third quarter, to $1.58 billion, but that result missed analysts' estimates calling for $1.72 billion. Adjusted net earnings checked in at $233.8 million during the third quarter, or $1.84 per share, which also lagged far behind analysts' estimates calling for $2.21 per share. Despite misses on the top and bottom lines, there were bright spots in the data, including a 40% surge in Partner Brands revenue, which includes products using popular Marvel and Star Wars characters, among others. That third-quarter surge in Partner Brands revenue was just enough to offset 8% and 17% declines in Franchise Brands and Hasbro Gaming, respectively. 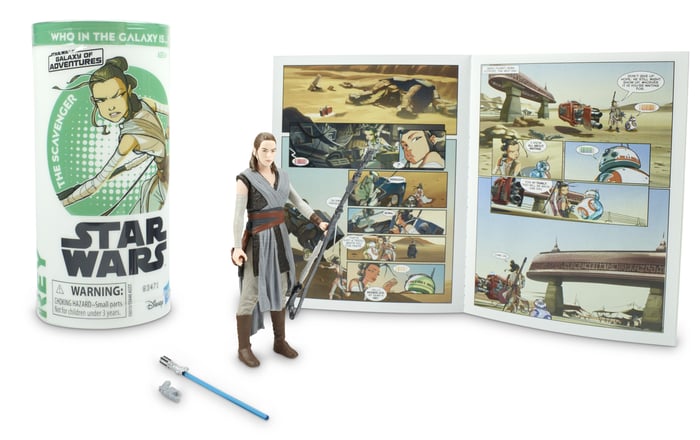 Partner Brands revenue is a bright spot, thanks to products from popular franchises such as Star Wars. Image source: Hasbro.

"The team drove continued growth in the Wizards of the Coast gaming brands, MAGIC: THE GATHERING and DUNGEONS & DRAGONS, and delivered significant new holiday initiatives. To start the fourth quarter, we are seeing a strong consumer response to the global launch of Hasbro's line for Disney's Frozen 2 and Star Wars: The Rise of Skywalker as well as the U.S. launch of the new NERF Ultra," said Brian Goldner, CEO of Hasbro, in a press release.

It was a disappointing third quarter for investors, but it's important to note that part of the challenge was from the U.S. and China tariff woes -- something investors must now consider when investing in consumer goods stocks. Perhaps the largest challenge of the tariff talks is the implementation dates, which have moved from September to roughly two weeks before Christmas. That's caused some orders to be changed or canceled by retailers, and some orders couldn't be filled with new specifications. The silver lining is that management noted Hasbro is on track to reduce China sourcing to 50% by the end of 2020, compared to China's accounting for roughly 67% in 2018.