NextEra Energy (NYSE:NEE) continues to prove it is far from a sleepy utility. The renewable energy-focused company delivered double-digit percentage adjusted earnings growth for the third quarter, thanks in large part to its investments in building new wind and solar energy projects. The company remains on track to hit the high end of its full-year outlook.

The utility delivered strong adjusted earnings across all three of its operating segments: 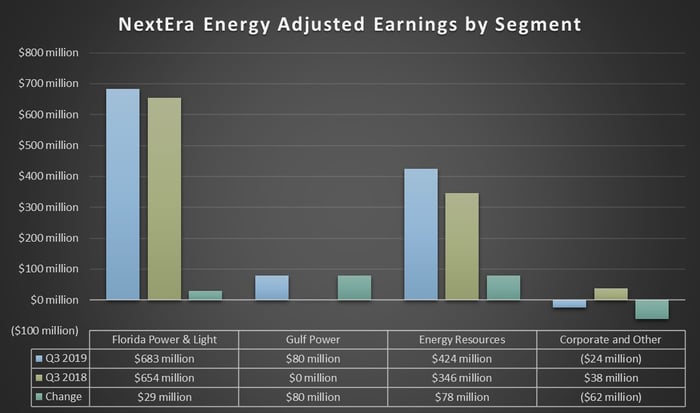 Its legacy Florida-based utility, FPL, generated solid results as earnings rose by about 4%, powered by new investments. FPL also invested another $1.4 billion on expansion projects during the quarter. Prior investments, which have helped grow its asset base by 8% over the past year, have included building clean, efficient, modernized power generating facilities as well as a stronger and smarter electric grid.

Gulf Power -- which NextEra acquired earlier this year -- added $80 million, or $0.16 per share, to the company's bottom line during the quarter. The integration of that utility, which also serves Florida markets, continues to go well, putting the company on track to deliver on its cost-savings and growth initiatives. One of those expansion-related projects is the Blue Indigo Solar Energy Center -- Gulf Power's first foray into solar energy. That facility should start up early next year.

Finally, earnings from NextEra's energy resource segment grew by nearly 23% year over year. The main driver of that growth was new projects that have come online over the past 12 months, which added $0.22 per share to the company's bottom line during the quarter. The company also benefited from strong wind conditions during the quarter, which was 104% above the long-term average. That's noteworthy given how weak the wind had been earlier this year. 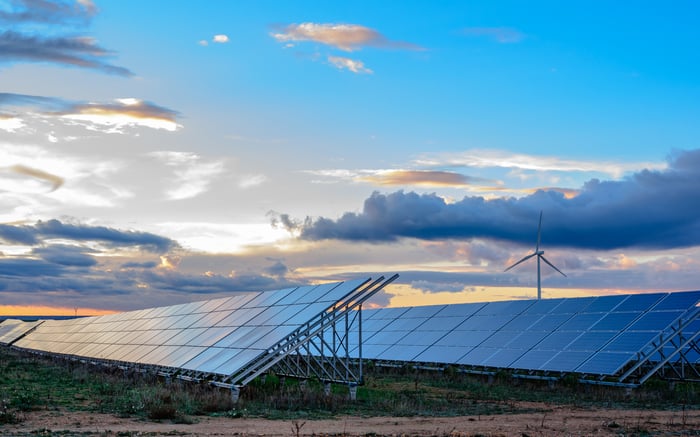 A look at what's ahead for NextEra Energy

Thanks to its excellent Q3 results, NextEra Energy remains on track to generate between $8 and $8.50 per share in adjusted earnings this year, though the company noted that it would be disappointed if it didn't hit the high end of that forecast. Given its success this year, it's also on pace to meet its longer-term target of generating adjusted earnings per share between $10 and $10.75  in 2022, which will require a compound annualized growth rate of 6% to 8%. Because of that, the company maintains its intention to increase its dividend payouts by 12% to 14% through next year.

Another factor underlying the company's confidence is its ability to secure new renewable energy projects.

"NextEra Energy Resources continues to capitalize on one of the best environments for renewables development in our history, with our backlog increasing by approximately 1,375 megawatts (MW)," CEO Jim Robo commented in the earnings press release. Overall, the company added 285 MW of new wind projects and 747 MW of solar plus 341 MW of battery storage during the quarter. Those additions brought the company's backlog up to more than 12,300 MW of new renewable projects -- the largest in its history.

In addition, NextEra also continues to invest in projects focused on cleaner-burning natural gas. Its energy resources segment signed an agreement to build the 50-mile Lowman Pipeline, which will supply gas to a new power plant in Alabama. That project would enable another utility to switch from coal to natural gas, which would reduce its emissions. The pipeline could be in service by mid-2022, assuming it receives all the necessary regulatory approvals.

NextEra Energy continues to do a superb job of making investments that grow shareholder value. Its focus on clean energy paid big dividends again during the third quarter. Because of that, the utility remains on track to generate high-powered growth through at least 2022, making it an excellent stock to consider buying for the long term.