Please ensure Javascript is enabled for purposes of website accessibility
Log In Help Join The Motley Fool
Free Article Join Over 1 Million Premium Members And Get More In-Depth Stock Guidance and Research
By James Brumley - Oct 22, 2019 at 8:45AM

The market is most definitely starting to compare Snap's per-user metrics to rival social media platforms.

Three months ago, Evan Spiegel, the CEO of Snap (SNAP 0.26%), suggested that raising Snapchat's average revenue per user (ARPU) would be the key to raising the value of Snap stock. It may not have been his intent at the time, but the market certainly listened. Now it's arguably become the most important data nugget investors will be looking for in its third-quarter report, due after the market closes on Tuesday, Oct. 22.

The make-or-break target is $2.11, according to estimates compiled by Zacks Investment Research. That figure jibes with other analyst guesses, and would mark a 32% year-over-year improvement. But given that Snapchat is still a relatively new and somewhat unpredictable operation, any significant improvement on Q2's ARPU of $1.91 could prove palatable.

Either way, investors may want to keep in mind that Tuesday's figure is only a milestone en route to per-user revenue closer to the kinds of numbers rivals like Facebook (FB 1.18%) and Twitter (TWTR 2.68%) are putting up.

Spiegel said during Snap's second-quarter conference call: "In terms of the ARPU question, I think if we take the U.S., for example, I think we're monetizing it like roughly one-fifth of Twitter ARPU or something like that in the U.S. And not that we want to use that as a comp, but I think there's a huge amount of upside relative to the time spent in engagement we're seeing on our platform."

Bigger-picture translation: The young CEO is a quick learner, recognizing that simply building a platform users love isn't enough. It has to be built to compel advertisers, too. 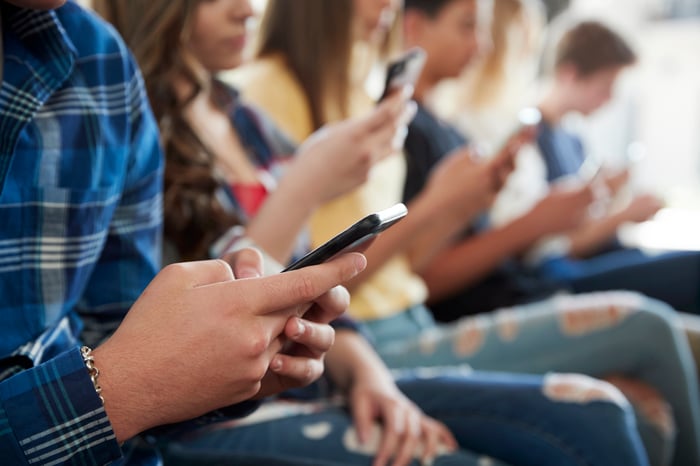 And he's right. Snapchat's per-user metrics are tepid compared with other social media platforms. Facebook's second-quarter ARPU rolled in at $7.05, and while Twitter doesn't crunch its numbers for those following the stock, shareholders have deduced that the microblogging site was driving roughly $6 worth of revenue per user as of its second quarter.

That leaves lots of room for improvement for Snapchat to catch up.

It's a mistake to believe all social media platforms can and will drive comparable revenues on a per-user basis. But it would be naive to ignore that Snapchat isn't well positioned to reach a Facebook-like ARPU at some point in the foreseeable future.

Yes, Facebook is the powerhouse on computers as well as mobile devices, and it largely wins on both fronts because it was the first smashing success on either. Since most users were introduced to and "trained" to use Facebook on a desktop or laptop computer, the mobile app more or less has to look like the PC version. Twitter, meanwhile, is the go-to spot to engage in topical discussions, often with strangers. The blogging platform was built on the premise of keeping posts short and sweet.

Snapchat is different from both. It's designed entirely for mobile devices, and though getting consumers' attention on a small screen has proved tough in the past, the email marketing outfit LiveIntent reported earlier this year that direct-to-consumer advertisers are now finding it costs 25% less to convert a mobile user into a customer than it costs to convert a desktop user.

In that light, all the disruptive changes Snap has made to its app may have proved savvy after all. Direct-to-consumer advertising -- mostly sponsorships of digital media -- is Snapchat's bread and butter, and as of last week the company is even better positioned to shake things up on that front. That's when it unveiled its new dynamic ads, which connect users directly to a brand's online catalog with ads that can be changed by the advertiser at any time.

The one potential pitfall? Snapchat dominates the under-24 crowd and the teenage crowd in particular. But that's the demographic with the least disposable income. Then again, that's the crowd that's most tech savvy, and as such more likely to click on an ad and make a purchase.

While Spiegel may have voiced his "aha" moment only a quarter ago, Snapchat's been making slow and steady progress down that road since its inception. The second quarter's ARPU of $1.91 was a 36% year-over-year improvement, and extended a long streak of such growth. More of the same is in the cards. The only question is: Will the future pace be satisfactory?

Almost as important, that growth was matched by clear, decisive growth in the number of users -- an area where Snap hit a headwind a year ago. Those watching Snap project roughly 207 million daily users of the app this quarter, up from Q2's 203 million. Keep in mind, however, that the second quarter's daily user tally blew past estimates, growing by 13 million thanks to a much stickier redesigned app. 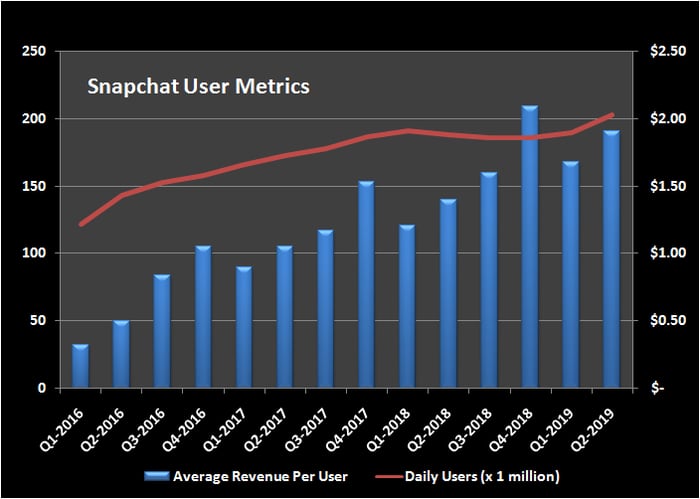 Make no mistake: The ARPU number will be in the driver's seat, not just Tuesday, but for the next several quarters. What Snap says about its revenue per user will likely set the tone for how investors read the entire report, inspiring or deflating confidence about the company's future.