Shares of ServiceMaster Global Holdings (NYSE:SERV) were slipping today after the pest-control specialist announced disappointing preliminary third-quarter earnings and also an acquisition. As a result, the stock was down 17.7% as of 1:20 p.m. EDT.

The Terminix parent said that the company expects revenue of $528 million for the third quarter, up 7% from the year before, due to 6% growth at Terminix, the division that makes up more that 80% of the company's revenue. However, that figure was short of estimates of $531.2 million. 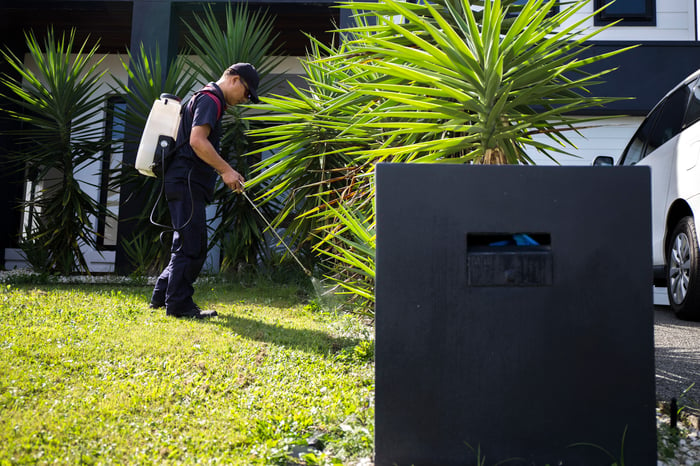 Elsewhere, the company said it would report adjusted earnings per share of $0.31, up from $0.24 in the period a year ago, but below expectations of $0.37.

CEO Nik Varty acknowledged the results were unsatisfying, saying, "While I am disappointed in our third-quarter profitability, I remain encouraged with the meaningful progress we continue to make on our plan to further strengthen the service delivery model in our Terminix business segment."

The company also said that Matthew Stevenson, the president of Terminix Residential, was leaving the company. It also announced two new acquisitions, taking over the Copesan partners McCloud Services and Gregory Pest Solutions. Those purchases should beef up the company's commercial pest control business in the Southeast and Midwest.

ServiceMaster also updated its full-year guidance, which added to the sell-off. Management lifted its revenue guidance, primarily due to the recent acquisitions, from $2.045 billion-$2.06 billion to $2.07 billion-$2.085 billion, but lowered its guidance on the bottom line. The company now sees adjusted EBITDA of $415 million to $425 million, down from a prior range of $435 million to $445 million, due to a number of factors including termite damage claims.

With a weak quarter, lower full-year profit expectations, and a vacancy in a key executive post, it's not surprising to see the stock falling today.