Suffering shareholders of shipping solutions provider Stamps.com (NASDAQ:STMP) got some very welcome news after the U.S. markets closed on Monday. The company announced a new partnership with UPS (NYSE:UPS).

This is a big deal for Stamps.com, as it marks the first major partnership since the company ended its exclusive partnership with the United States Postal Service earlier this year, an event that sent shares reeling. Stamps.com decided to change its business model from the exclusive (but lucrative) deal with the USPS in order to better accommodate an increasingly diverse industry full of emerging shipping partners.

Here's why the market is so excited. 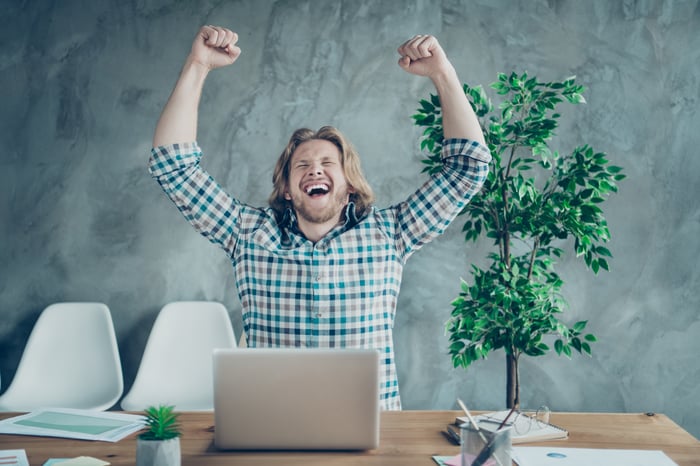 The deal has benefits for both companies, although likely more for Stamps, which needed a big win after the USPS deal ended. Stamps.com customers also make out very well, too. According to the press release from the UPS website, UPS will now be offering Stamps access to discounts of up to 55% on shipping rates, including waived surcharges. Stamps.com customers will also gain access to the UPS Digital Access Program, which is a comprehensive service that simplifies e-commerce customers' shipping across management, fulfillment, and delivery services. Stamps.com customers will also be able to access UPS' guaranteed delivery option, in which customers will be eligible for refunds in case of missed delivery, as well as other UPS tech tools such as instant tracking.

As was the case in the USPS deal, Stamps.com will likely also get an incentive payment from UPS, although some analysts are saying that Stamps' fee is unlikely to be as profitable as the one it received from the U.S. Postal Service, due to that previous contract's exclusivity.

UPS will get a leg up on competitors due to its ability to offer discounts to Stamps.com's 740,000 customers across small, medium, and large businesses. UPS has been looking to aggressively gain share among smaller and medium e-commerce companies in the recent past, as it had already inked a similar discount-for-volume deal with Shopify back in 2017.

UPS is the next-largest partner

UPS isn't just any other e-commerce company. It has the largest scale of any domestic carrier except for the USPS. According to Stamps.com's recent annual report, UPS earned $43.6 billion domestic revenue on 4.4 billion packages shipped and $14.4 billion internationally on 810.9 million packages shipped in 2018. That compares with $70.8 billion from the United States Postal Service -- although of that figure, only $51.6 billion was served by Stamps.com solutions.

Since we don't know the exact monetary terms of the deal yet, it's hard to know how positive of an impact this will have on Stamps.com's financials. Last quarter, the company earned just $0.79 in diluted earnings per share (EPS), or about one-third of the $2.41 earned in the year-ago quarter. The decrease was, obviously, due to the loss of the USPS contract, but also increased costs associated with landing new customers and integrating the 2018 MetaPack acquisition.

Annualized, that comes to about $3.16 in EPS, so after today's stock price surge to about $93 per share, Stamps.com is trading at about 30 times its depressed earnings. While it's unclear if Stamps can achieve anything close to its former profitability, its earnings should grow from these recent numbers as revenue increases; however, it's entirely unclear how much of the lucrative USPS deal will be recouped from the new UPS agreement.

Nevertheless, it's certainly a good start and a welcome sign for shareholders, who will have a chance to learn more about the terms of the deal when Stamps.com reports third-quarter earnings on Nov. 7.