Are both companies correct in their claims, or is one mistaken? Let's take a look at which company is right and what investors need to know. 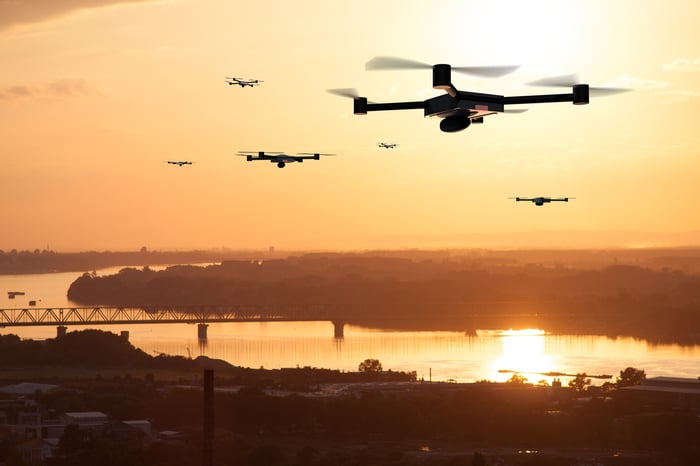 To understand the situation, you need to start by understanding what Part 135 certification is and why it's important. Title 14 of the Code of Federal Regulations Part 135 outlines the approval necessary to be a for-profit air carrier or operator in the U.S. Specifically referring to drones, the FAA states, "Part 135 certification is the only path for small drones to carry the property of another for compensation beyond visual line of sight." In other words, without full Part 135 certification, the company can't charge for delivery and is limited in where it can operate.

Did Google Wing and UPS Flight Forward both get Part 135 certification?

Yes, both companies did, but it's not that simple. The companies received different levels of certification, and the implications are important. Google Wing received a Part 135 single-pilot air-carrier certificate. While this is an exciting step for the company, it's limited. Wing is only licensed for one pilot and is limited to flying drones within the line of sight of the pilot or an observer and not over crowds of people.

Specifically, UPS Flight Forward is allowed to fly its delivery drones farther than where the pilot or an observer can see, and it can operate over crowds of people. Additionally, UPS Flight Forward drones can now fly at night and with cargo weighing over 55 pounds. As soon as Flight Forward received its certification, the company completed its first drone delivery at WakeMed Hospital in North Carolina, exercising these newfound freedoms.

Which company is right, and what are the implications?

This certainly gives UPS a first-mover advantage, but it also paves the way for other companies, including Google, to gain the necessary certification and waivers to operate as a full-fledged drone airline without current limitations. UPS will need to move quickly and effectively if the company wants to capitalize on the current advantage.