Investors will want to pay attention to what Assembly Biosciences, CymaBay Therapeutics, and Madrigal Pharmaceuticals say about their most promising candidate therapies.

The American Association of Liver Diseases Annual Meeting, better known as The Liver Meeting, will open in Boston on Nov. 8. Data will be presented on new therapies for diseases ranging from hepatitis to non-alcoholic steatohepatitis (NASH), which affect hundreds of thousands, if not millions, of patients worldwide, as well as rarer conditions.

We will explore three biotech companies that may not be on the radar of the average retail investor, but which will be presenting their latest data at the event. 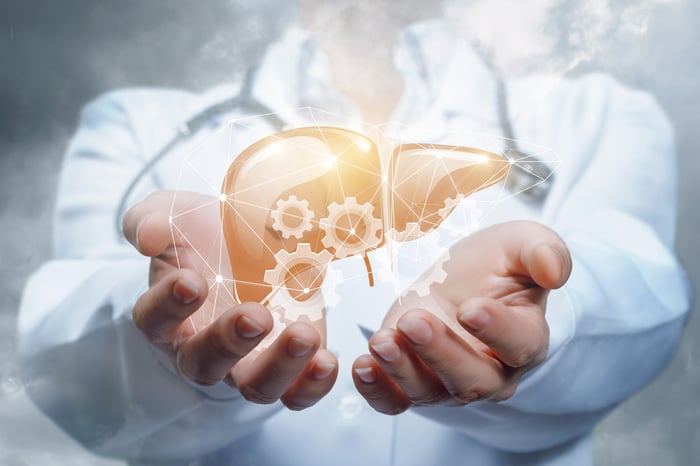 1. Assembly takes on Hepatitis B virus

Last week, Assembly Biosciences (ASMB -2.77%) announced that data from two abstracts on its chronic hepatitis B drug candidates had been selected for a late-breaking poster session at The Liver Meeting. The stock ramped up 70% over the following days. Despite that run, Assembly's share price still has room to grow.

Assembly plans to report results on patients treated with its lead drug candidate, ABI-H0731, in combination with approved treatments for HBV. The combination yielded both faster and more robust reduction in markers of HBV in patients, irrespective if they were newly treated or had received prior therapy. Additionally, long-term treatment data for the combination will be presented.

Also to be presented are phase 1 clinical trial results on Assembly's second-generation drug candidate, ABI-H2518. Patients received either placebo or ABI-H2518 for 14 days, after which they were tested for HBV levels. The drug was able to reduce viral loads by several-fold, an encouraging sign that patients in later-stage trials could see similar or better efficacy.

Investors outside of healthcare specialists may not be familiar with Assembly, which went public in 2014 through a reverse merger with Ventrus Biosciences. The company executed on its plans, resulting in a peak stock price in March 2018 of $64 per share. But it raised $144 million that July at $36 per share, and the stock continued to slide from there. By last month, you could have bought in under $10. Therefore, last week's share price jump to the current $15 range still allows for plenty of upside. ABI-H0731 may be the next big thing in HBV treatment. We'll learn more in November.

CymaBay Therapeutics (CBAY -8.65%) will highlight clinical trial results for its lead drug, seladelpar, to treat patients with primary biliary cholangitis (PBC) who also have cirrhosis. The data will show how the drug behaves after administration to a small cohort of patients. Additional preclinical data will be provided regarding seladelpar's structure and ability to specifically bind to its target.

The company claims seladelpar selectively targets a receptor found on cells in the liver that plays a role in regulating bile acid synthesis, inflammation, fibrosis, lipid metabolism, storage, and transport. CymaBay believes that selectivity gives its candidate a unique advantage over the drugs of competitors such as French outfit Genfit (GNFT 1.83%). Its pathway holds significant promise for treating non-alcoholic steatohepatitis (NASH). On Tuesday, investment bank H.C. Wainwright held a fireside chat during an investor conference dedicated to NASH.

Seladelpar's phase 3 trial in PBC will complete enrollment this year, so any supporting evidence of activity, like the data to be presented next month, should help investors to better handicap the trial's outcome. Additional phase 2 trials are ongoing for the combination of NASH and primary sclerosing cholangitis.

CymaBay had $241 million in cash on hand at the end of the second quarter. Despite that, the stock market is giving it an enterprise value of less than $85 million. Therefore, there's potential for this well-financed company's stock to trade upward to multiple times its current value if the clinical results are positive.

Lastly, Madrigal Pharmaceuticals (MDGL -4.94%) will give an oral presentation on the updated data from the long-term use of resmetirom as a treatment in patients with NASH. This 36-week extension study evaluated resmetirom's effect on patients' liver fats, liver enzymes, and markers of fibrosis, a direct consequence of NASH. The company will also present a scientific poster on patient biopsies to offer a patient-level look at how resmetirom impacts steatosis (commonly referred to as fatty liver disease) and liver fibrosis. Madrigal has previously presented data demonstrating that resmetirom can both treat NASH and reduce the level of lipids such as LDL and triglycerides.

Like Assembly, Madrigal became public through a reverse merger back in 2016. After the company announced positive phase 2 results at the end of May 2018, its share price spiked to $322. Madrigal took full advantage of that investor enthusiasm and raised approximately $300 million at a share price of $305. Today, Madrigal trades around $88 per share. While it has enough cash to fund the phase 3 trial in NASH, the upside for investors from here will ultimately depend on how robust the phase 3 results are in relation to the competition.

NASH emerged as one of the hottest areas in biotech, and competition poured in. Intercept Pharmaceuticals (ICPT -3.77%) filed a New Drug Application with the U.S. Food and Drug Administration for the approval of obeticholic acid as a treatment for patients with fibrosis due to NASH. The FDA's decision could come before the results of resmetirom's Phase 3 trial are known. While it's a risk, companies are developing drugs with different mechanisms, which will provide differentiation and potentially offer synergistic benefits to patients.

The share prices of Assembly, CymaBay, and Madrigal are all down year-to-date and are far below their peaks. Each company, however, is sufficiently capitalized to achieve the key inflection points of reporting late-stage clinical trial results. Risk-tolerant investors may choose to go bargain-hunting among them -- recognizing that ultimately, it will be the clinical results they deliver next year that will determine where their stocks go next.