Please ensure Javascript is enabled for purposes of website accessibility
Log In Help Join The Motley Fool
Free Article Join Over 1 Million Premium Members And Get More In-Depth Stock Guidance and Research
By Anders Bylund - Oct 23, 2019 at 10:03AM

The final terms for the streaming video giant's latest financing effort are in, and they're mildly nicer than the last round's. Business as usual, really.

It's no secret Netflix (NFLX -1.85%) relies on raising debt in order to finance its content production ambitions. The company recently put the finishing touches on another round of debt papers just a few days after the latest earnings report.

Let's see how Netflix's financing effort worked out this time.

Tuesday night, the company followed up with the official pricing and terms for the new debt. The final tally will be $1.0 billion in dollar-denominated papers and 1.1 billion euros -- roughly equal to $1.22 billion at today's exchange rates. The total of the two geographically separated series works out to approximately $2.22 billion, an 11% upsizing from the original plans.

We still don't know exactly who's on the other side of this financial exchange, but Netflix did offer some hard numbers. Here's how the new debt fits into the company's last few rounds of debt-based financing:

As usual, the euro-based part of the debt papers shows a lower interest rate than the dollar-denominated portion. The interest scores on both sides of the Atlantic came in below the figures seen six months ago, partly due to falling long-term interbank rates. The slightly larger cash values at issue this time didn't seem to move the interest needle very far.

Netflix's long-term debt load stood at $12.4 billion at the end of the third quarter. Introducing another $2.2 billion adds up to a new total near $14.4 billion, weighed against a new cash equivalents tally of $6.6 billion. Let me visualize the long-term trend for you (not including the brand-new senior notes and their equivalent cash boost): 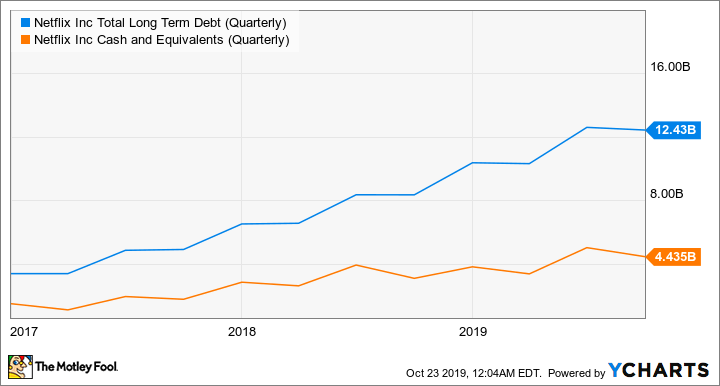 Netflix consumed $2.9 billion of free cash over the last four quarters while taking on $4.4 billion of fresh debt, though the fourth-quarter cash burn should come in significantly above the year-ago period's. The official plan is to consume $3.5 billion of free cash in 2019. That mismatch implies that cash reserves should rise faster than long-term debt loads in 2019 as a whole.

Looking ahead, Netflix's management expects the cash burn to start slowing down in 2020. The company is "moving slowly toward FCF positive," and the need to raise more debt should go away when that free cash flow turns positive.

The business idea behind the rising cash-flow prospects is that the early cash investments have started a subscriber-attracting flywheel that should pay dividends in the long run. A strong catalog of exclusive content will keep Netflix customers coming back for more, and they're bringing their friends. Rising subscriber numbers and the ability to raise monthly fees from time to time will bring Netflix's cash flow closer to breakeven over the next few years. Extend that trend over many years, and we'll be looking at a global cash machine with several hundred million loyal subscribers -- a growth stock.

Nobody knows exactly when Netflix might turn that crucial cash-flow corner to start paying down its debt papers instead of signing a steady stream of new ones. Credit ratings expert Moody's, for one, expects breakeven cash flow to take a bow in 2023 and calls 2019 "a trough year" for negative cash flow.

I'd like to see future debt increases growing smaller, round by round, but I'm not worried about Netflix's debt-signing habits in the meantime. Taking on more debt is simply how Netflix operates right now. It's a way to add more weight to the company's accelerator pedal while the global market for streaming video services is taking shape. Being one of the leading providers in that field once the sector reaches maturity is the real long-term value driver behind Netflix and its stock.