It's also introducing a hard lemonade-seltzer drink next year.

In a bid to keep the Summer of Seltzer bubbling along well into the future, Boston Beer (SAM -1.04%) announced it has reformulated the entire lineup of its Truly brand of hard seltzer to give it a "more fruit-forward" flavor profile.

While the company says the new seltzer is cleaner and crisper, this is the second time Boston Beer has rejiggered the recipe. And the brewer might actually be worried about the influx of competitors into the market, some of which pack more punch. Anheuser-Busch InBev's Natural Light Seltzer has 6% alcohol by volume, and Pabst Blue Ribbon's seltzer is 8% ABV, while Truly comes in at 5% like industry leader White Claw.

With Boston Beer scheduled to report earnings next week, we'll get to see the impact Truly continues to have on the brewer. There is both risk and opportunity in changing how its seltzer tastes. 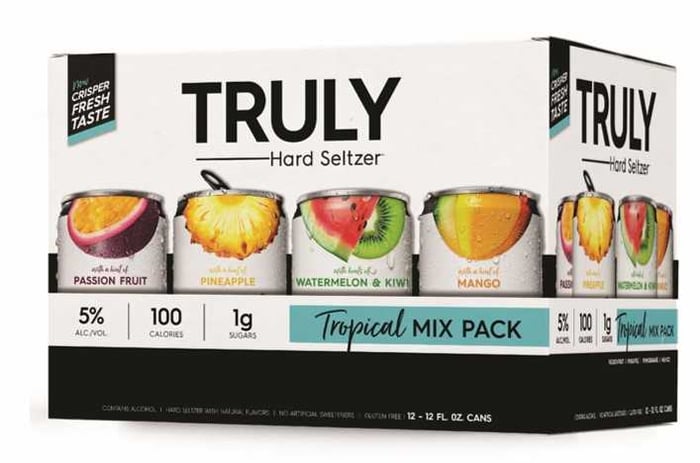 Beer is now all about seltzer

Truly is the second-biggest brand on the market, with a better-than-25% share (White Claw has a 56% share), and analysts say it has now become the brewer's biggest product, accounting for one-third of total revenue.

While that speaks to just how popular hard seltzer has become, it also points to how far Boston Beer's flagship beer Samuel Adams has fallen. The brewer now has a lot more riding on maintaining Truly's position in the seltzer market and needs to gain ground on White Claw, if only to fend off the incursions of newer entrants to the market.

Nielsen data shows hard seltzer sales over the past 12 months ending Sept. 7 surged to $1.1 billion, giving it a 2.8% share of the beer, hard cider, and flavored malt beverage market. Year to date, White Claw says its sales are up 638%.

It also says that more than half its sales are coming from light beer, which is why Anheuser-Busch, Molson Coors, and Constellation Brands all have or are introducing hard seltzers. Boston Beer, however, says it draws more seltzer drinkers from wine and spirits, and it believes the new formulation will help draw in even more drinkers to Truly.

Boston Beer's CEO said in a statement announcing the flavor change, "We are committed to being the best-tasting hard seltzer on the market and we believe the improvements to our taste get us there."

When life hands you lemons

The brewer is also planning on introducing a new beverage: hard lemonade seltzer. It says 64% of hard seltzer drinkers see hard lemonade as the closest alcoholic beverage to hard seltzer water, and because 87% of Truly and Mike's Hard Lemonade drinkers say they would purchase a blended beverage, Boston Beer likely sees this is an opportunity to steal sales from the leader.

Mike's Hard Lemonade is made by White Claw's parent Mark Anthony Brands, and market research firm IRI says the drink's off-premise sales -- or sales from places like packaged goods stores and convenience stores -- is up 3.7% year to date. Sales of the even more potent Mike's Harder Lemonade, with an 8% ABV, are up 17%, and it has generated almost double the revenue of its milder sibling to reach $83 million.

Along with the taste of Truly hard seltzer, Boston Beer might just want to consider increasing the potency of the drink. Although a fruitier flavor might help, a bigger alcohol bite may be what's necessary to help the brewer take on White Claw while fending off the competition.